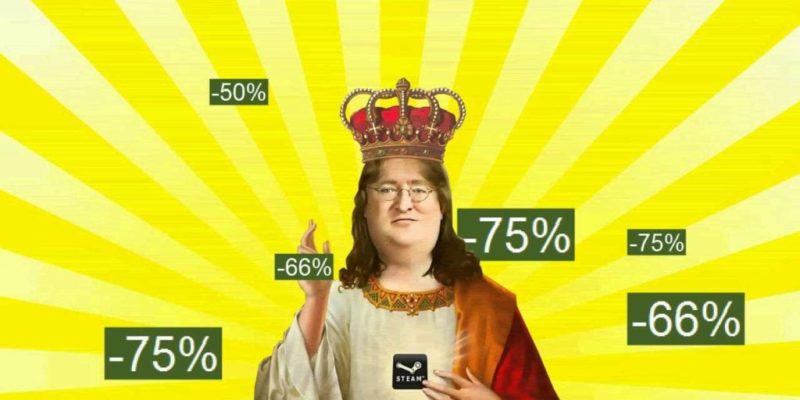 An adventure towards bankruptcy.

Ring the bells across the land, hug your family close and prepare for economic ruination as the Steam Summer Sale launches in earnest. Valve’s annual price slashing has begun, as foretold by the prophets, and nothing can save you now except a steely resolve against cheap PC games.

We’ll get to some deals in a second, but first let’s explore Valve’s little Steam Summer Sale game for 2014: The Summer Adventure. As usual it involves you all spending money. But shush, try to ignore that. It’s a fun adventure!

Every day, each Steam user is randomly assigned to one of five colourful teams when they either craft a badge or elect to join a team. Each team gathers points by (go on, guess) crafting badges. Ideally, you want to craft the Summer Adventure badge from the 10 Steam Summer Sale trading cards. That not only earns team points, but also gets you some of the usual stuff like backgrounds and emotes.

Why do you care about earning team points anyway? Because if you end up on the super duper winning team at the end of the day, you have a small chance of getting free games. 30 people from each winning team, each day, get to choose three titles from their wishlist. Huzzah. Just try not to think about how much that may have cost you in trading card costs.

This year’s Steam Summer Sale will run from today (obviously,) until 30 June.

Dailies today include The Witcher 3, Far Cry 3, XCOM, Day Z and Don’t Starve. Flash sales are here as always, and right now seem to have Hotline Miami and Mirror’s Edge in there. Community choice voting will net you Summer Adventure Badges. These have changed a little bit, because you now vote for groups of games (“Action RPG” say) rather than individual ones.

While the Steam Store settles down and gets over its heavy load, here is some relevant and crucial Steam Sale viewing material. And another one, below.