After last week’s disappointing Temtem Weekly Reset, this week is a breath of fresh air. The Saipark has two Temtem with triple Luma encounter odds and superb recolors, Occlura and Raiber. FreeTem has Telomere Hacks back in their list of rewards. Plus, there’s a decent chunk of change to be made from FreeTem.

Players are still (less and less) patiently waiting for the release of the Temtem summer update. It will be arriving in July and bringing with it the new island of Kisiwa, 25 new Temtem, tons of new abilities, and Clubs. Players are antsy for the next adventure, but the new Temtem Weekly Reset has enough to keep everyone distracted for another week. 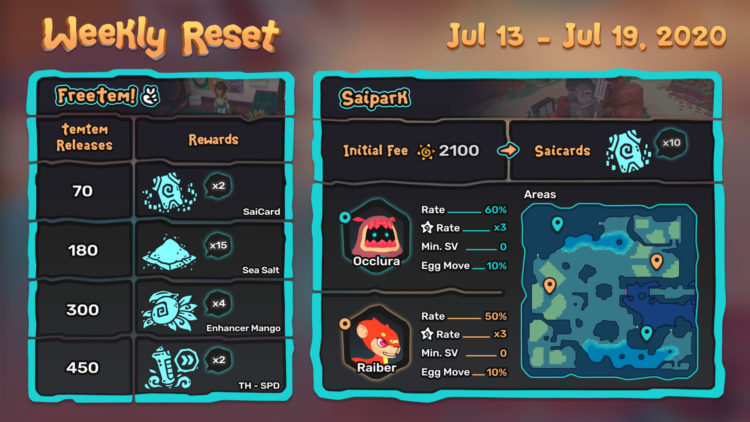 Cash in on FreeTem rewards

The tier one FreeTem reward this week is mostly irrelevant to you. The 10 Saicards you receive for your initial Saipark fee is more than enough to catch a Luma. But the 15 Sea Salt you get as the tier two reward is a goodie. Each chunk of salt is worth 300 Pansuns. That’s a total of 4,500 Pansuns for releasing 180 Temtem.

FreeTem’s tier three reward is excellent if you’re leveling the TV stats of a SPATK (special attack) Temtem. As for the tier four reward, two Telomere Hacks for SPD (speed) are always a welcome sight to me.

This is a tough one

If you have a favorite between Occlura and Raiber, consider yourself lucky. Both Temtem have superb Luma recolors and, going purely on looks, I have no idea which one I’d prefer. The encounter rate for Occlura is 10% higher, so that will make your chances of catching a Luma slightly better. Plus, if you want to battle with it in Temtem Ranked Matchamking, your Luma Occlura needs its Psy Surge Egg Move. Whereas Raiber doesn’t need its Egg Move, Rampage.

My recommendation for tackling the Temtem Weekly Reset this time around is to release 180 Tems for the Sea Salt. Cash that in and then go try to catch the Luma you prefer. I’d advise Occlura from a convenience and PvP standpoint. After that, grind out those Telomere Hacks. Then, if you still have time left in the week, pray for Kisiwa.