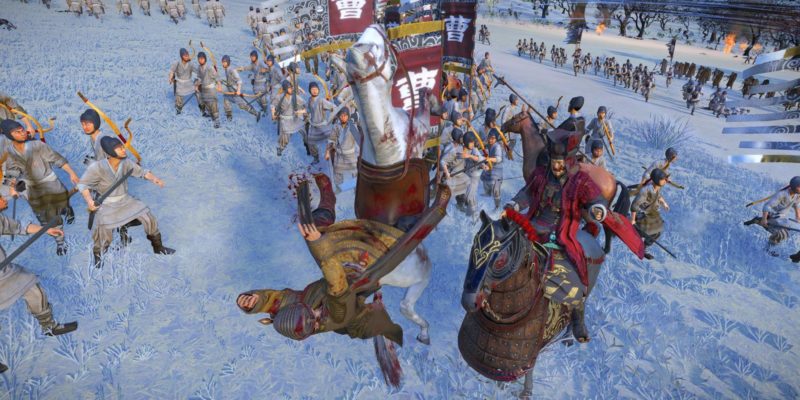 Total War: Three Kingdoms – A World Betrayed brings new challenges for the Hero of Chaos, Cao Cao, who’s poised to take over the lands of Chen. Here’s our faction guide to help you with Cao Cao’s campaign. 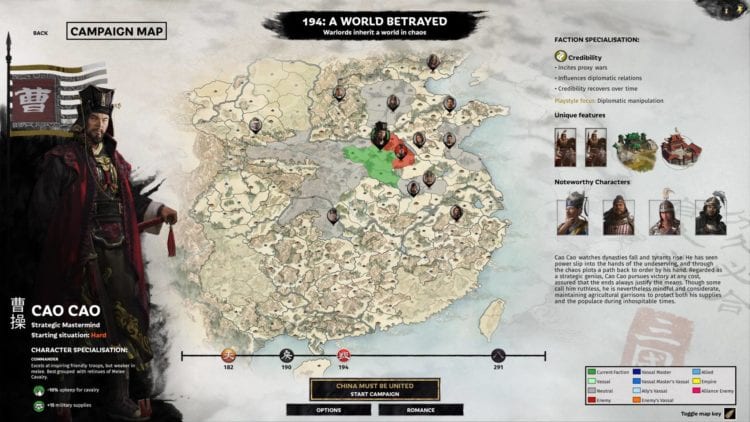 Note: Speaking of GPT, you may encounter a bug with your income when you reload earlier autosaves. It’ll show that you’re bleeding funds (even though that wasn’t the case before reloading). Heading into your next turn, you’ll realize that your gold has been wiped clean before it increases again. This can be a hassle in your Total War: Three Kingdoms – A World Betrayed campaign. 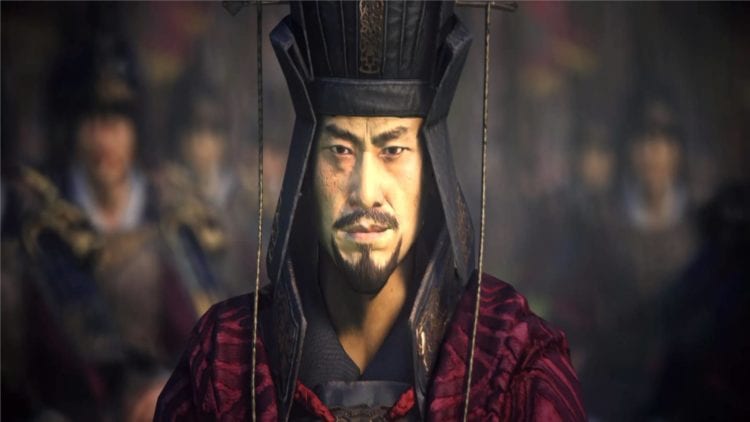 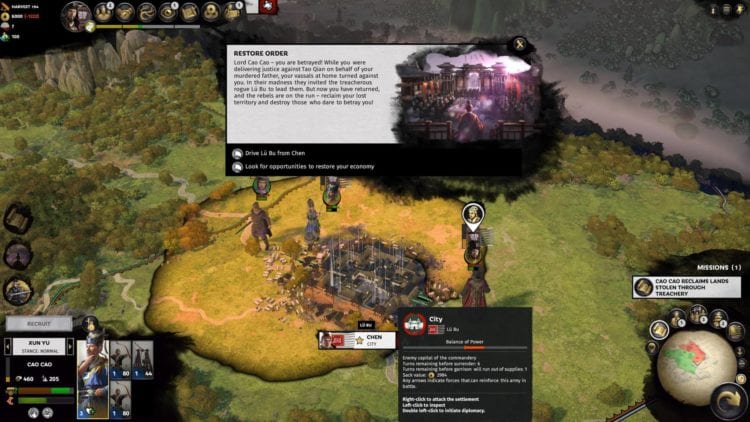 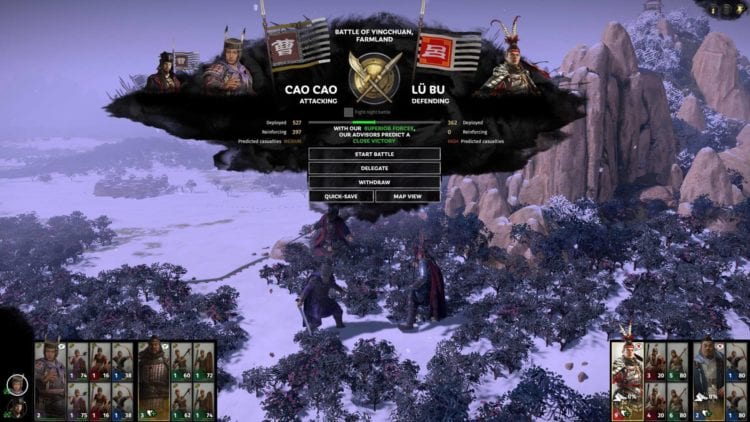 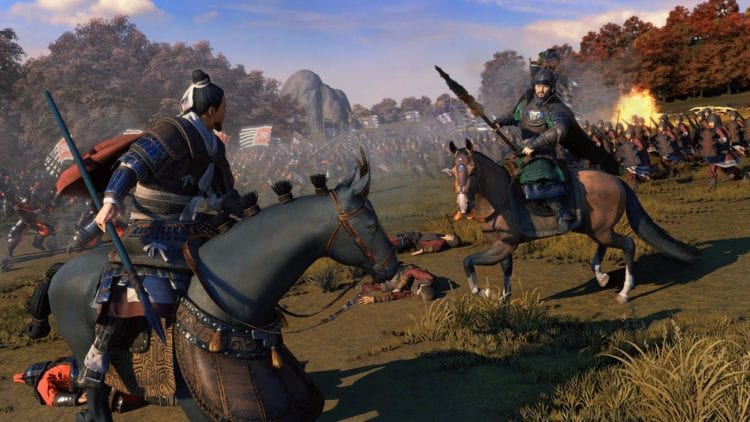 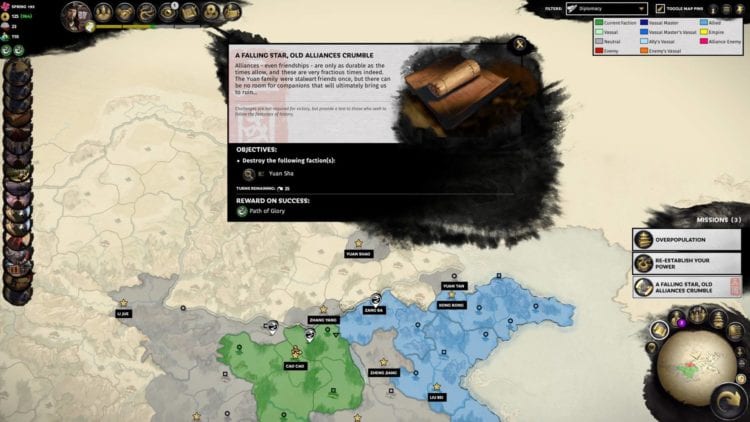 The Warrior King and the Bandit Queen

If you have Mao Jie, deploy him too since he has “Fire Arrows.” Recruit troops as long as you’ve got decent income and move towards Dong capital. You’re in a coalition with Zang Ba so your troops will still replenish. Soon, Zheng Jiang will likely besiege Zang Ba’s city, so declare war and defeat her army. 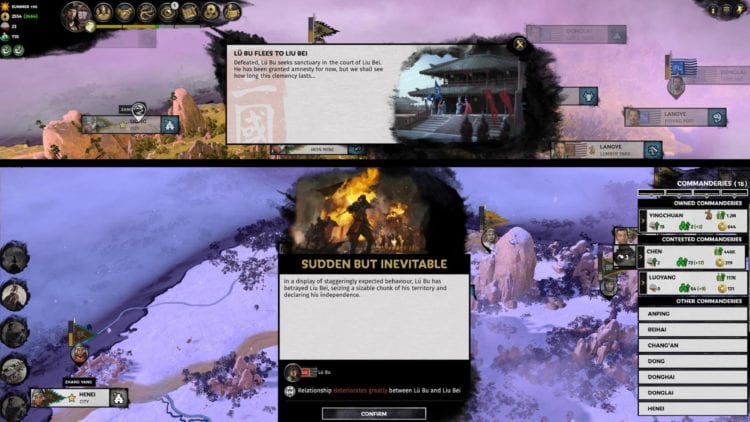 You’ll get the event notifying you that Lu Bu has fled to Liu Bei. He ends up declaring war on him on turn 8, taking over his lands. However, Liu Bei still has lots of armies roaming around.

Just keep advancing with your forces. Have one army move close to Zheng Jiang’s last settlement (Pengcheng temple) and the other towards Lu Bu’s lands. Lu Bu should get trounced by Liu Bei’s armies in the field, leaving his cities defenseless. Declare war on Lu Bu and “detach and cap” those settlements. You could also besiege them and wait until Liu Bei’s close enough to help. 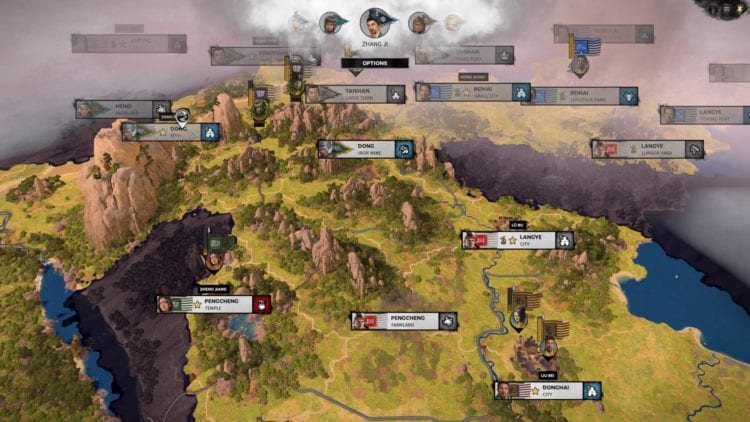 Xiahou Dun famously lost his eye in the Battle of Xiapi against Lu Bu’s forces. He ended up eating his own eye to gain an infinite musou boost due to the sheer badassery. Sadly, I don’t think that event exists in Total War: Three Kingdoms – A World Betrayed. Anyway, by turn 13, Zheng Jiang’s faction has been wiped out and Lu Bu was down to his last city: 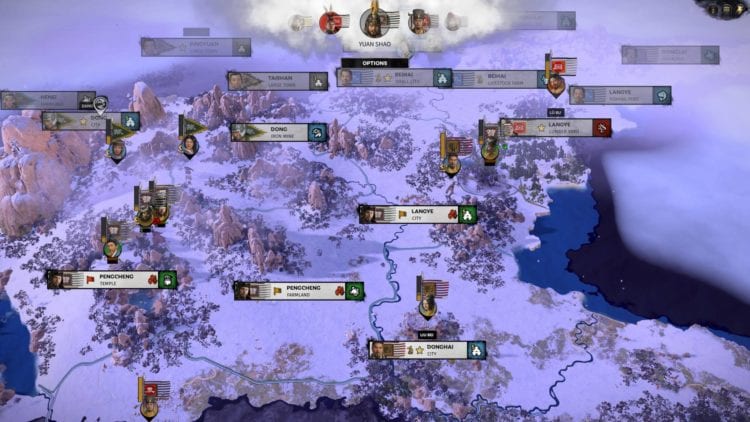 Yuan Shu will likely conquer Liu Chong’s last territory around turn 14 or 15. It’s possible for Liu Chong and/or Luo Jun to end up in your faction.

Note: There’s an event where the two are assassinated by Yuan Shu’s agents, but I haven’t seen this happen before. 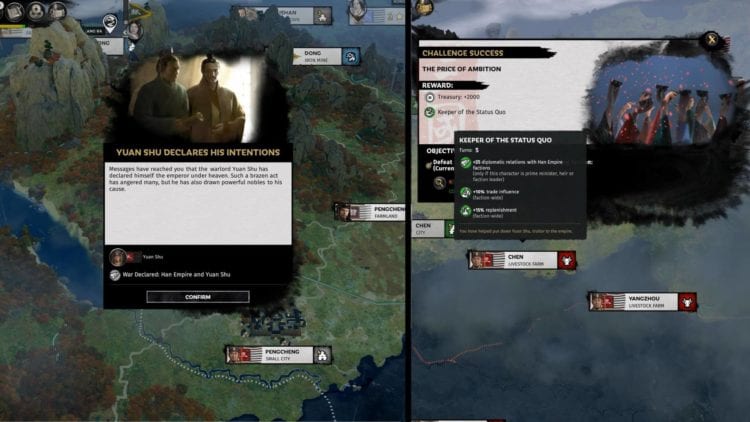 On turn 16, Yuan Shu will declare himself emperor. One turn later, you’ll get another mission to defeat a couple of his armies or garrisons. You should have your forces ready to attack. Declare war on Yuan Shu and ask Liu Bei for help. Yangzhou commandery should be yours in a few turns. 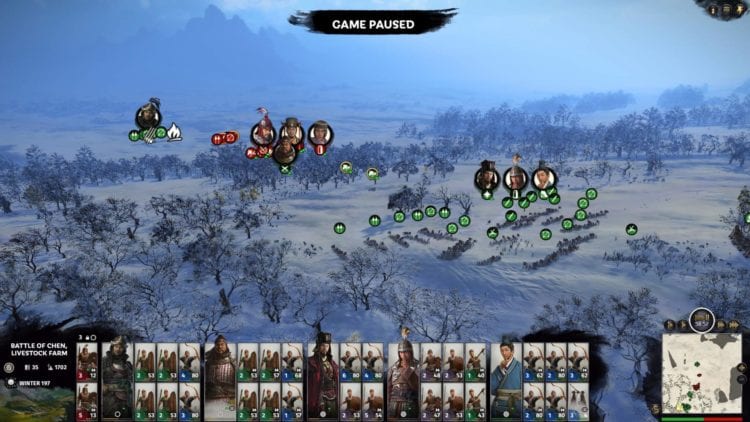 What about his half-brother Yuan Shao? Well, the moment Cao Cao had enough Credibility, I instigated a Proxy War between Yuan Shao and Liu Biao (who already had military access through my lands). That distracted Yuan Shao for a bit, allowing me to march my veteran soldiers all the way north. Likewise, you’ll have a mission to capture Ye’s and Youbeiping’s capitals. Since I started my conflict with Yuan Shao fairly late, the mission failed.

His son Yuan Tan is also fighting with Kong Rong. There’s an event on turn 23 where Kong Rong is automatically confederated by Yuan Tan’s faction. There does not seem to be a way of preventing this from happening. In any case, you’ll see that Kong Rong is a “potential turncoat” which means you can instantly enable him as a spy. 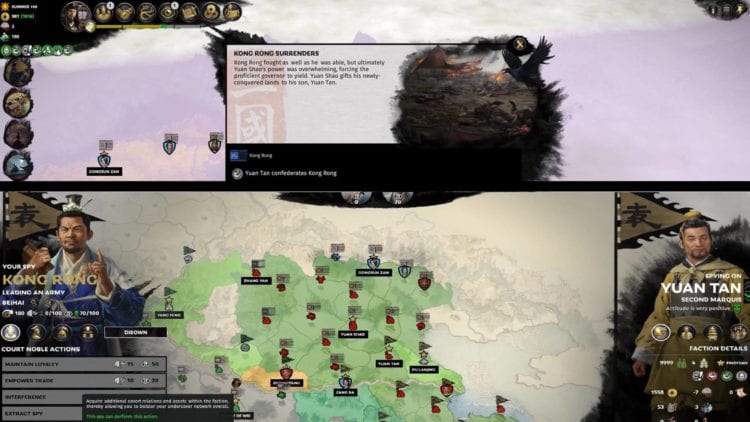 I had around three main armies facing off against Yuan Shao and most of his vassals. Another army led by Xiahou Dun waylaid Yuan Tan’s troops, and I was able to capture Kong Rong’s lands in due course. I also called my coalition partners to join in, and Gongsun Zan even helped distract Yuan Shao for a bit.

Slowly but surely, I was taking over the north. This might be called Total War: Three Kingdoms – A World Betrayed, but I definitely see a massive campaign such as this if ever we do end up with a “Battle of Guandu” DLC. 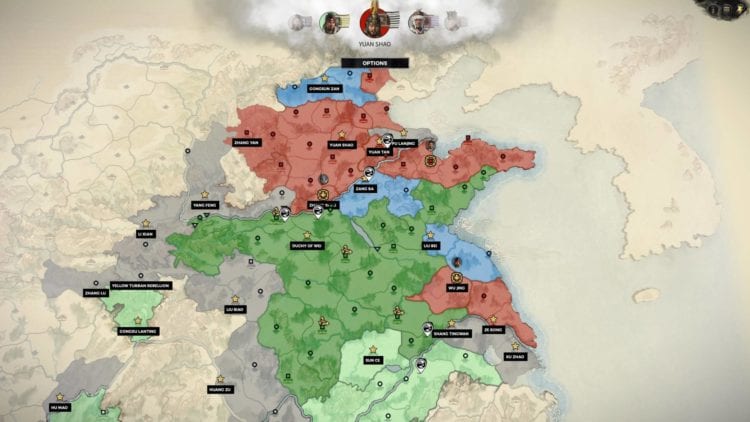 Cao Cao’s future: The Han Emperor and the Kingdom of Wei

From turn 4 onwards, Li Jue and his vassals (Guo Si, Yang Feng, and Li Xian) will play hot potato with the Han Emperor. Eventually, Yang Feng will capture the emperor and move him to Luoyang (which is just a small town in A World Betrayed). You could deploy a small army in the nearby lumber yard to capture the town and gain control of the emperor as soon as possible. There are, however, a few downsides: 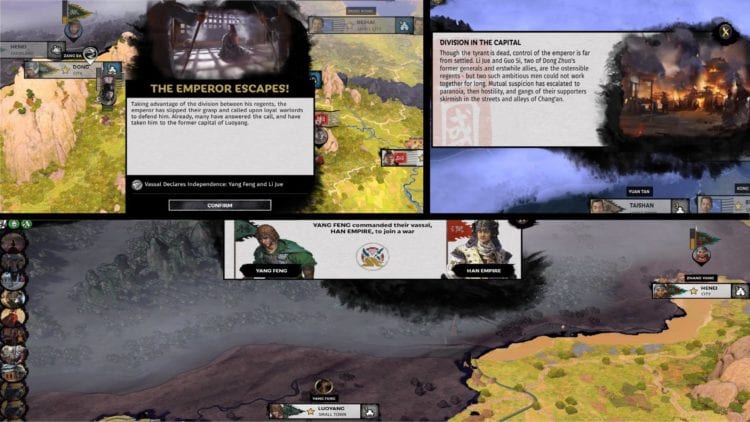 In my case, I only decided to claim the emperor around turn 25 or so, well after my newly-conquered lands in Yangzhou were pacified. Then, around turn 35-38, Cao Cao will get the Jade Girdle event where the Han Emperor is conspiring with Liu Bei and Ma Teng. Following the storyline option leads to diplomatic penalties with the two lords. 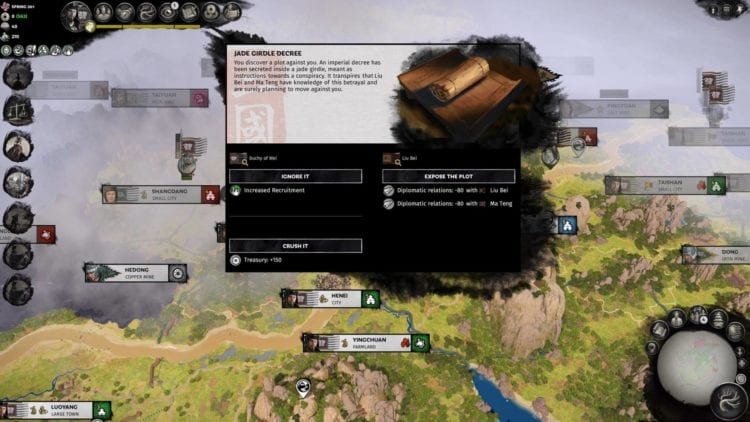 Liu Bei was already part of my coalition so I had nothing to worry about. Ma Teng, meanwhile, was angsty. By the time Cao Cao attained the rank of King in A World Betrayed, I was already at war with him. I guess I could just instigate another Proxy War, this time between him and the Kingdom of Wu led by Sun Ce (who was actually one of my vassals for a short period of time). 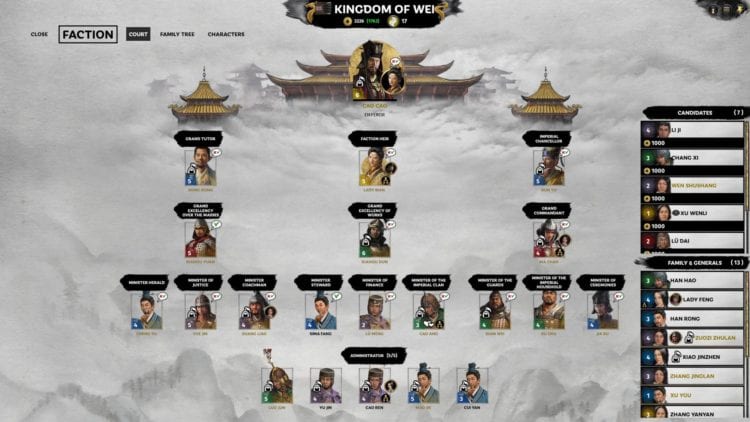