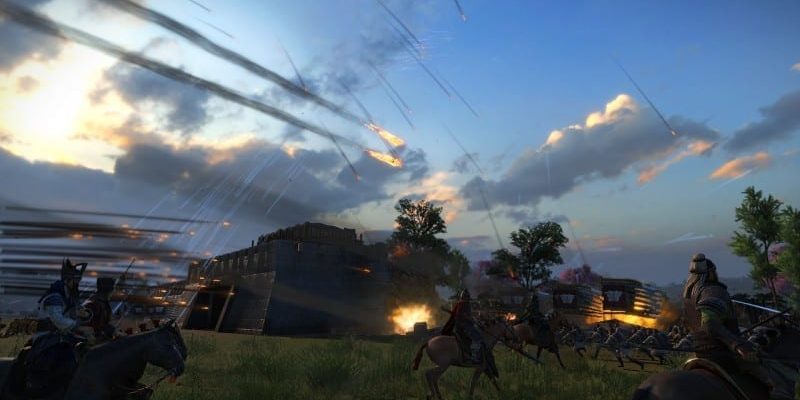 Total War: Three Kingdoms has over a dozen lords (and ladies) for you to choose from to kickstart your quest to unify China. None of them, however, can match the wit and cunning of Cao Cao, whose style name is Mengde. He’s a hero so nice, he named himself twice.

Rising from a minor government post, Cao Cao became the dominant force in China’s central plains, defeating Lu Bu, Liu Bei, and Yuan Shao in his bid for power. This Total War: Three Kingdoms guide is all about helping him achieve his ambition — a unified China under the Kingdom of Cao-Wei. Check out Total War: Three Kingdoms’ espionage gameplay trailer which also takes a look at Cao Cao’s “Manipulate” and “Proxy War” mechanics:

Note: This guide is for the original campaign (Romance Mode/VH difficulty). You can also check out our Cao Cao guides for Mandate of Heaven and A World Betrayed. Likewise, our Total War: Three Kingdoms guides and features hub has a trove of information for you.

Cao Cao’s leader perks include an increase in military supplies and a decrease of cavalry upkeep costs. This signifies Wei’s mastery of the central plains and its elite cavalry units sweeping through opponents in numerous campaigns. The faction can also build unique farming garrisons and tuntian conscription buildings for supplies, replenishment, and increased unit ranks.

What makes Cao Cao’s playstyle unique, however, is his resource: Credibility. Every turn, you accrue a small amount of this resource. When you have 25 credibility, you can use it to boost your diplomatic relations with another faction. Alternatively, you can also manipulate them to feel more negatively about their neighbors, nudging them closer to war.

When you have 75 credibility, you can trigger a “Proxy War.” That’s when the fun starts. Proxy Wars will let your rivals duke it out for supremacy, all without penalizing you for instigating it. You can use it to weaken your rivals while you pick up the pieces in the end. In my case, Yuan Shao was about to swarm my lands. I triggered a Proxy War between him and Gongsun Zan just so he can get off my back. I then gobbled up both their forces eventually. 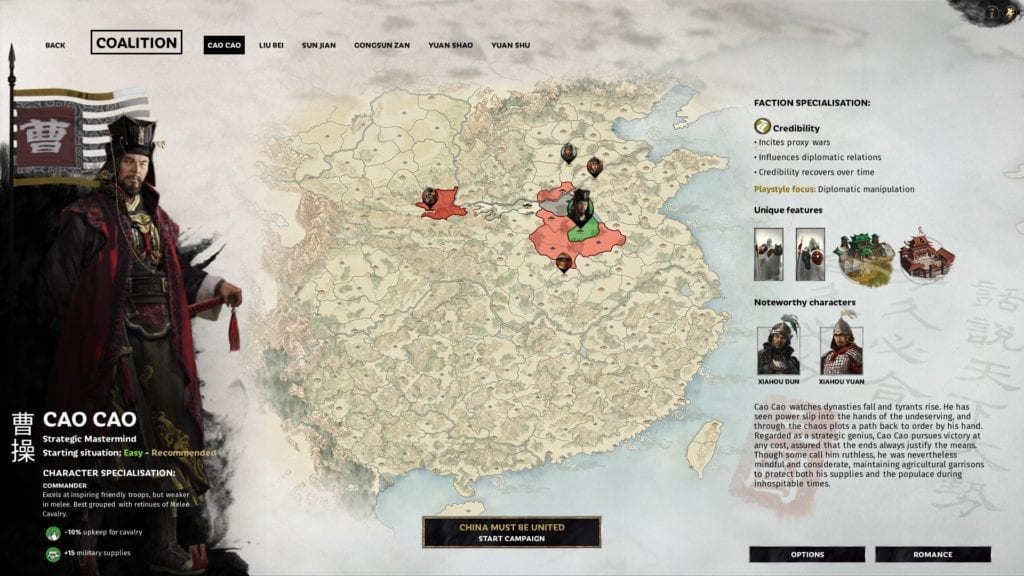 Here’s the thing though, Cao Cao is listed as an “easy” or “recommended” choice for newcomers. The problem is that his campaign isn’t a walk in the park. In the central plains, from your base in the city of Chen Liu, you’re smack dab in the middle of enemies. Yuan Shao and Gongsun Zan are to the north, Liu Bei and Kong Rong to the east, Yuan Shu and Dong Zhuo to the west, and Liu Biao and Sun Jian are to the south.

If you want to get the feeling of dropping in the middle of a battle royale, then Mengde is your guy. The challenge is also rewarding since the action almost never lets up. He is the hero of chaos, after all, which means he does love being stuck in the middle of a conflict. For a more beginner-friendly campaign, I’d suggest giving Sun Jian or Ma Teng a try. 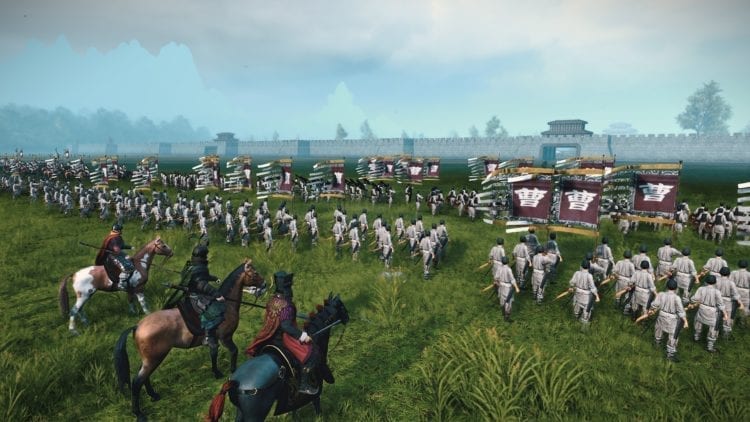 Cao Cao, Xiahou Dun, and Xiahou Yuan are getting ready for a battle. And, yes, you’ll have loads of battles as Cao Cao.

You’re at war with Dong Zhuo and the passive Han Empire territories. Don’t get distracted though because you want to consolidate your power in Chen commandery first. The westernmost settlement will probably end up attacked by He Yi, a named Yellow Turban commander, which means you’ll have to go war with him eventually. Yangzhou to the south is held by the Han Empire so capture those settlements as well.

Here’s where it gets tricky: When you’ve controlled Chen, Yangzhou, and Runan (He Yi’s territory), you’ll end up bordered by no less than six leaders who are out for blood. Try using credibility to manipulate leaders or instigate a Proxy War if need be, or just make some trade deals and non-aggression pacts so you can survive. 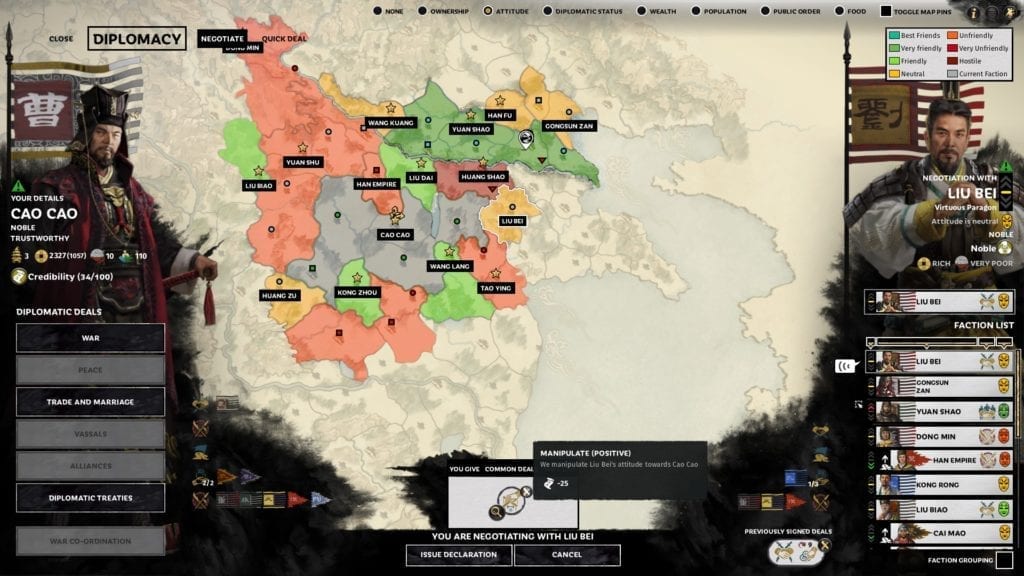 Use credibility to manipulate leaders to stay on their good side, or just use it to give the central plains some much needed high school bickering.

Cao Cao’s faction dilemma happens very early in Total War: Three Kingdoms. It involves his father Cao Song being killed by Tao Qian, a minor lord in nearby Pengcheng. You have the option to go to war with Tao Qian (historical route) or ignore it. Do note that you have a few turns before your father dies. Try to find a suitable marriage so you can get a female officer for free.

Around the same time, Dong Zhuo also gets assassinated by Lu Bu. This might seem like an opportune time to attack, but his territory will stretch your forces further to the west, away from your power base.

Once you’ve finished off Tao Qian, your next order of business is to destroy Yuan Shao’s forces to the north. This is more challenging since Yuan Shao’s territory has likely expanded and he has more vassals and allies with him. With Yuan Shao taken out, it’s time to finish off anyone who might’ve declared themselves as false emperors. 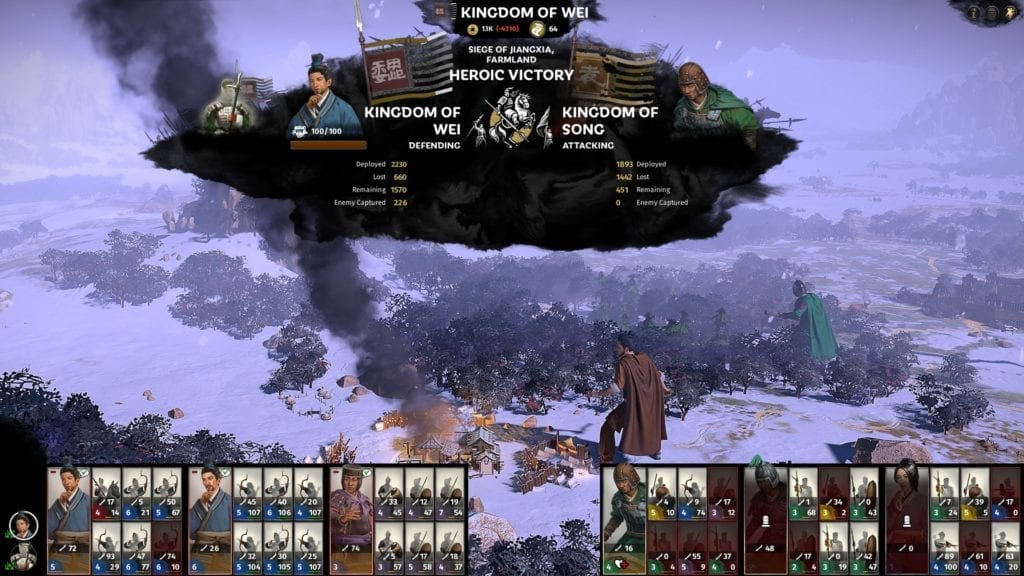 Yuan Shao was the first leader to attain Kingship, establishing the Kingdom of Song. Cao Cao automatically established the Kingdom of Wei at the same time. Sun Jian (Wu) controls the third kingdom.

The good thing is that you’ve got three stalwart generals under your command: Xiahou Dun, Xiahou Yuan, and Cao Ren. These three will remain forever loyal and indebted to Mengde. Chen province is not the richest one around since it has farmlands, but Lady Bian, Cao Cao’s wife, can be placed on assignment to boost peasantry income.

Cao Ang is your eldest son, but Cao Pi is your designated heir (and he’s still a child when the game begins). Eventually, more historical officers will pop up in your area — Mao Jie, Xun Yu, Hua Xin, and more offer their aid. 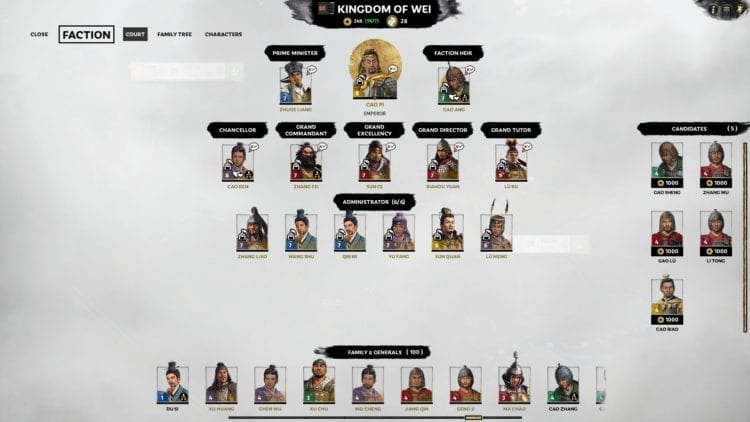 This was my court towards the end of the game. The great Cao Mengde had already passed, and Cao Pi became the faction leader. I’ve also recruited Zhuge Liang, Lu Bu, and the Sun brothers.

There are also scripted events that let you recruit famous legendary characters. One of these is Dian Wei. In my first playthrough, while reviewing Total War: Three Kingdoms, Dian Wei automatically joined my forces. I made a few mistakes so I started a new game, and Dian Wei did not join that one so I’m not sure what happened. 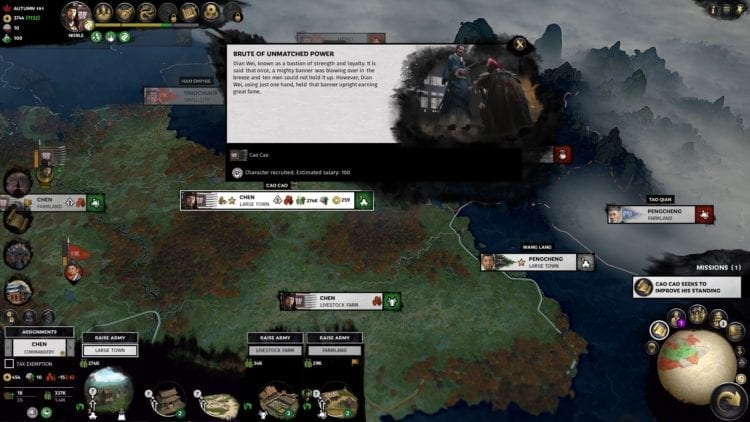 Dian Wei joined my faction early on. For some reason, this happened in my first playthrough as Cao Cao, and it didn’t happen in the second one.

Much later, when you have Zhang Liao in your army and you’re facing off against Liu Bei, the God of War, Guan Yu, might get convinced to join your faction. Again, I was able to get this event to fire once. After reloading a save, I could not get it to happen again.

There might be a possibility of Xu Chu, Yue Jin, and Sima Yi joining your faction later in the game. These scripted events did not fire during my playthrough, although Xu Chu did appear randomly as a free agent. 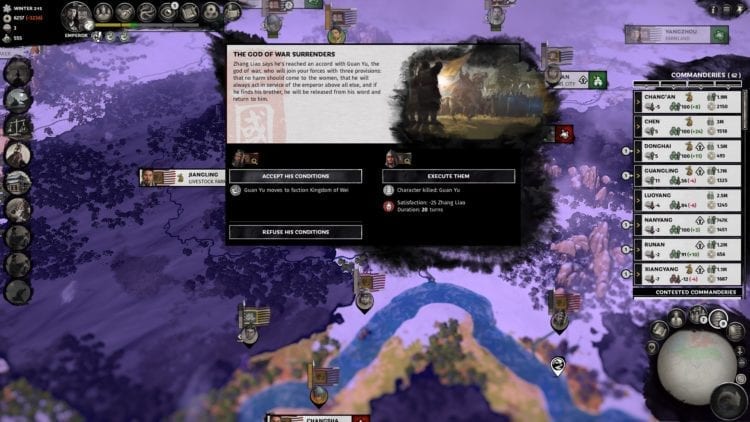 Guan Yu joined my faction during the campaign. I made a mistake during that turn so I reloaded the previous autosave. The event did not fire after that even though I did the same actions.

Ideally, you’ll want Cao Cao (Commander) and Xiahou Yuan (Vanguard) with a handful of cavalry (melee and shock cavalry respectively). The Cao-Wei faction’s tiger and leopard cavalry can be devastating, but also fairly expensive. You’re not getting them as cheap as Ma Teng’s faction, that’s for sure.

Cao Cao should also have a couple of archers (since he’ll have access to fire arrows eventually). Xiahou Dun should focus on spearmen and melee infantry. Concentrate on the character classes for their retinues based on their Wu Xing specialties. You can find more about this in our article for newcomers detailing new features and quirks in Total War: Three Kingdoms.

Try not to stretch your forces too thin since you’re right at the middle of where the action happens. Focus on heading to one direction of the map at a given time so as not be overwhelmed. In my playthrough, it was constant, neverending war — it was rewarding but stressful.

Use your credibility to boost diplomatic relationships and instigate Proxy Wars. You’ll be able to undermine your opponents’ diplomatic webs and alliances easily if you maximize the use of this feature. Like Cao Cao, you’d rather betray the Total War: Three Kingdoms world, than let it betray you. 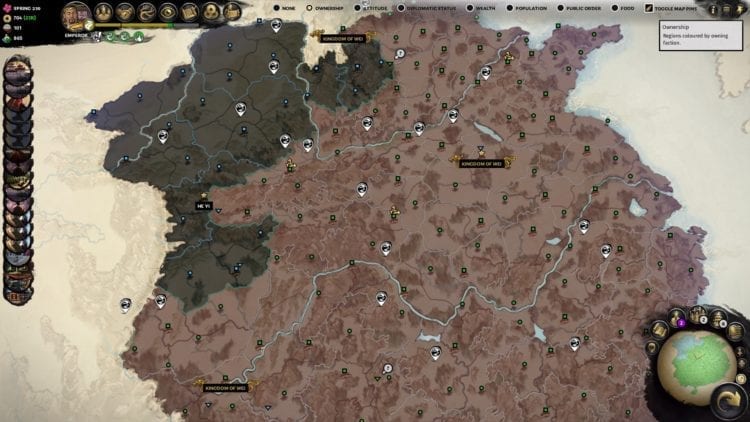 China by the time I attained the ultimate campaign victory. The Yellow Turban lord, Gong Du, remained a faithful ally. Who would’ve thought?