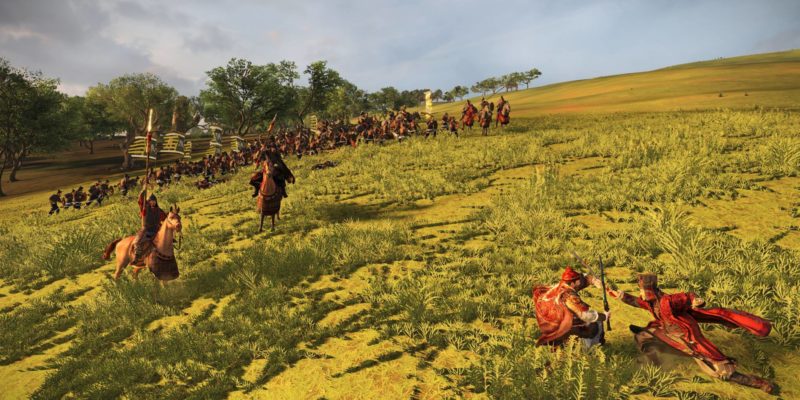 Total War: Three Kingdoms – Mandate of Heaven lets you play as Cao Cao, the ambitious and cunning general who would eventually lay the foundations of the Kingdom of Wei. This mini-guide covers Cao Cao’s faction mechanics, opening moves, dilemmas, events, and additional tips. 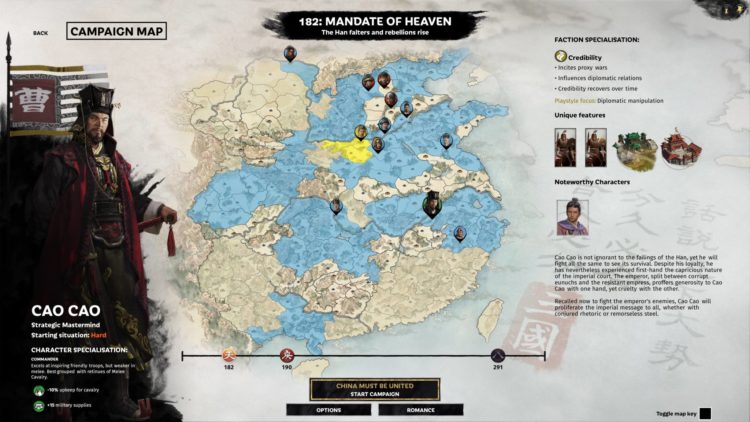 Cao Cao, the Hero of Chaos, is ready to attain hegemony in the Southlands due to his new starting position in Total War: Three Kingdoms – Mandate of Heaven’s campaign. His unique perks (Credibility), buildings, and units have already been discussed in a previous guide, and those same mechanics still apply in this expansion.

The main difference in Mandate of Heaven is that you won’t be in too much of a hurry to use his quirks. Cao Cao can manipulate relations, sure, but you may not instigate proxy wars between imperial subjects. You can only do this for Ma Teng and Han Sui (who are considered independent rulers). As such, you’ll likely wait until turn 36 once the Han Empire is dissolved by Dong Zhuo to stir up some trouble. 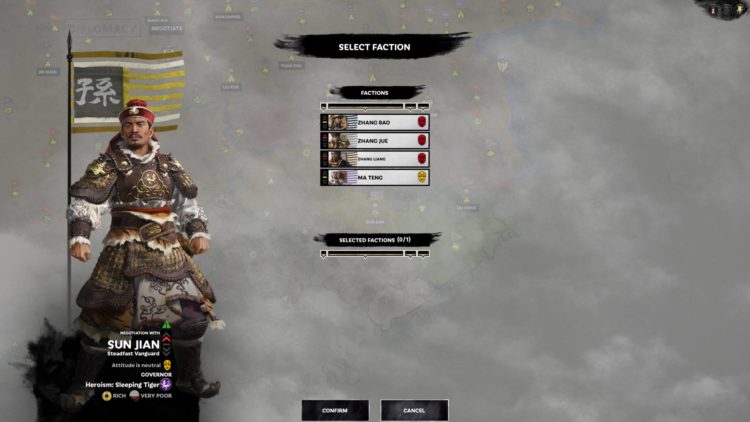 Cao Cao’s opening moves are tied to his early-game quests in Mandate of Heaven‘s campaign. You’ll need to go to various settlements on the map — Yangzhou’s toolmaker, Lujiang’s lumber yard, and Poyang’s mine — and each location will present a dilemma (as well as +5 Credibility once you reach them). The goal is to complete these objectives quickly since Sun Jian will also attempt to capture more lands while you’re at it. 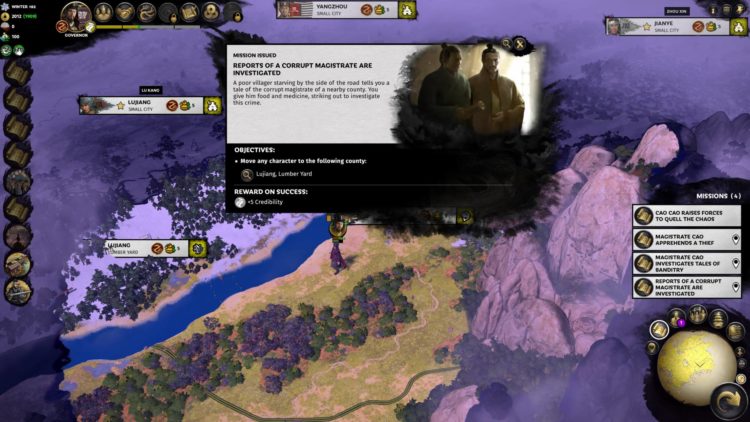 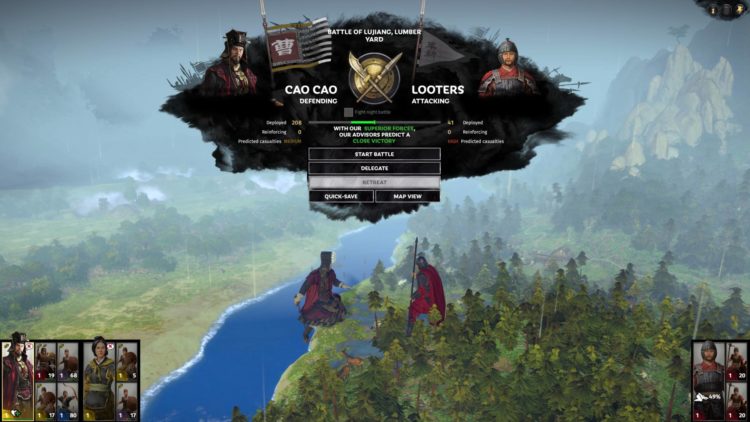 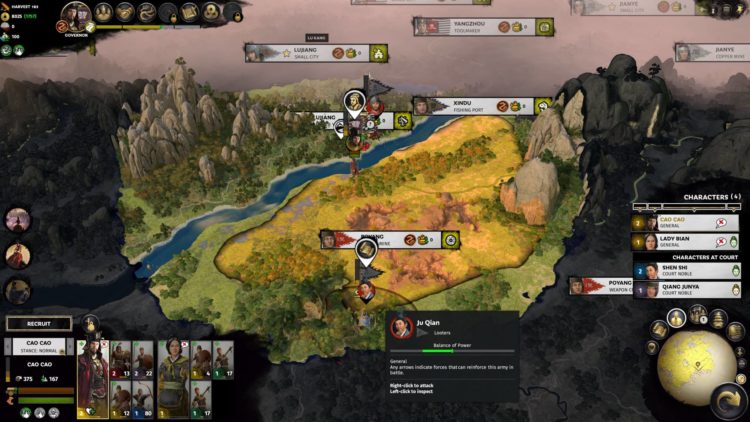 The reason that previous save is important is because a major dilemma comes up once you defeat that looter army: 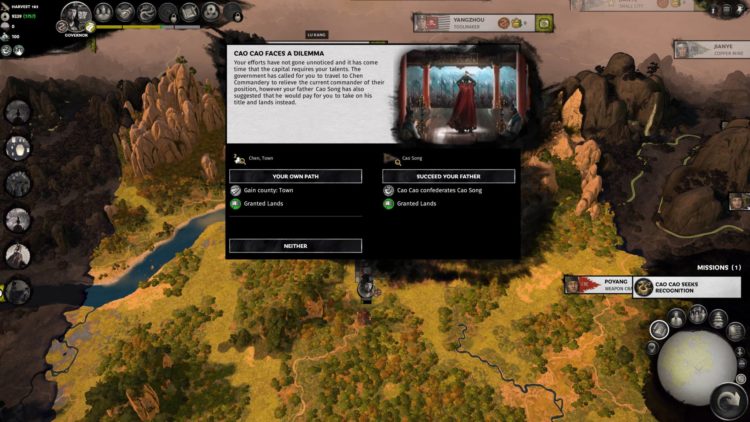 You own a single town (Chen) and Liu Chong holds the other settlements. You can declare a feud, but that’ll only weaken the Han forces once the Yellow Turban tide swarms southwards. Oh, and Liu Chong will likely be the only one who has a trade agreement slot available, so you’d gimp your own economy by warring with him. There are almost no benefits to be gained in this situation. 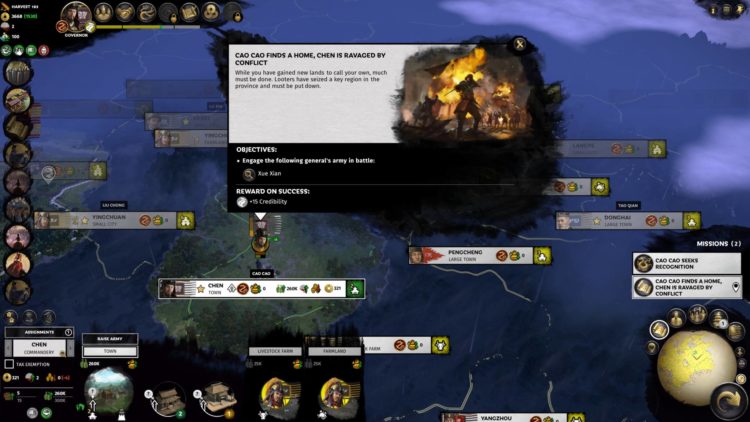 Choosing the second or third path leads to Cao Cao’s hegemony in the Southlands — the “Wei in Wu.” Of course, the second path is a lot easier since you’ll get several settlements.

Note: If you’re not playing as Cao Cao in Mandate of Heaven, the AI tends to pick the third option. As such, Cao Song’s lands will pass to his wife upon his death. Cao Cao, meanwhile, will be capturing deserted settlements.

The Defense of Xindu

The rest of the guide assumes that you picked the second option. Cao Cao will automatically take over his father’s lands in the Xindu commandery. You’ll notice that a looter army is besieging Xindu’s lumber yard and it’ll capture the settlement in two turns. 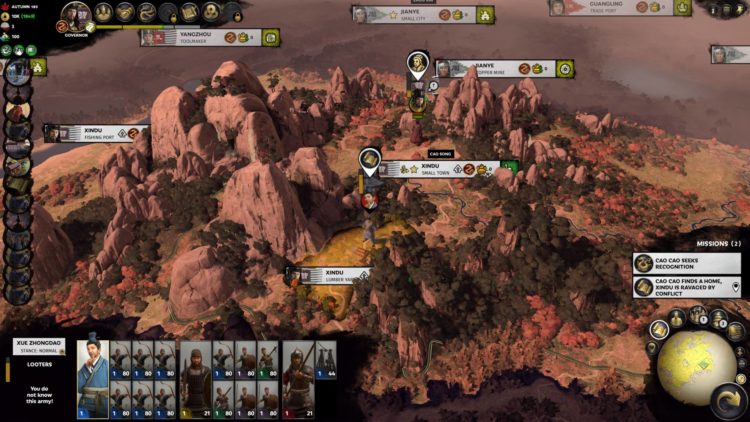 If you already have an officer with “Fire Arrows” unlocked, they’ll be very helpful in the long run (as well as Lady Bian and her “Stone Bulwark” skill). Replenish for a turn at Xindu and be ready to save your settlement.

On your next turn, move your army close to the looters and switch to ambush stance. You should be able to reinforce your settlement when it gets attacked. With the looter army sandwiched between a small garrison backed by defensive towers and your own reinforcing retinues, you can earn an easy victory. 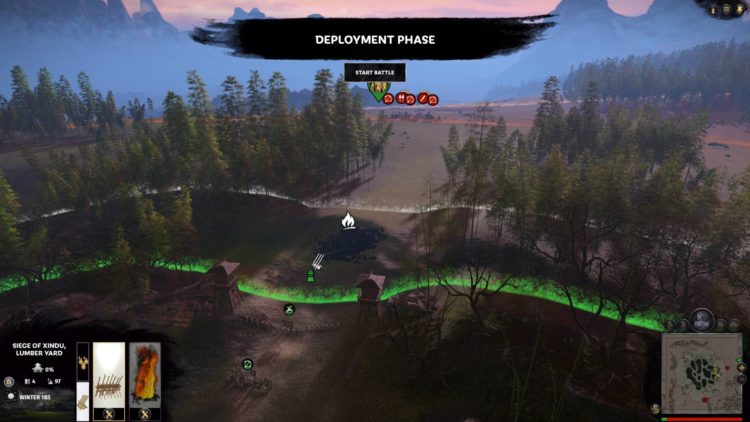 Note 1: These deployable items are currently bugged and you can place them outside your deployment zone by holding the ALT key + dragging them via left-click.

Note 2: The remnants of other looter armies you leave behind can attack your settlements, but your garrisons should be able to hold out. 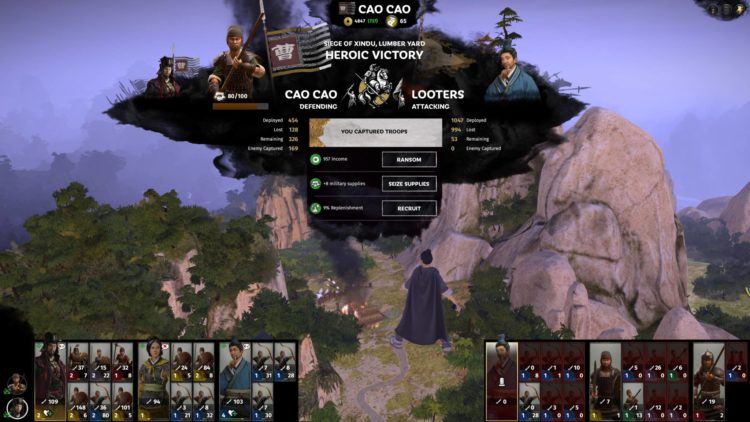 The Fall of the would-be Kingdom of Eastern Wu

The reason we’re trying to blitz through Mandate of Heaven‘s first few turns as Cao Cao is because of the threat posed by Sun Jian. Eliminating the competition early ensures that Sun Jian cannot build a power base. Once Sun Jian captures Jian’an’s minor settlement, he’ll march off. Declare a feud, attack, and claim the territory. Sun Jian should double back and you can lay in wait for him in the forested areas nearby. 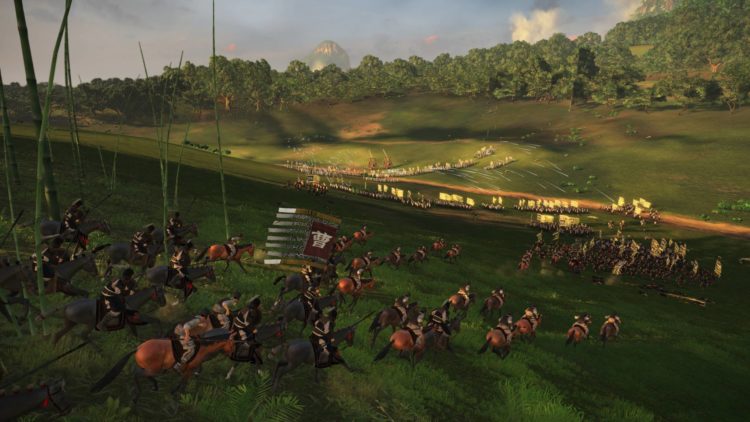 Remember our use of cavalry units? These will serve you well. Cycle-charging and catching units in the open will demolish Sun Jian’s troops. Within the first dozen turns or so, the would-be Kingdom of Eastern Wu was no more.

From here, the sky’s the limit. I opted to take “Foreign Envoys” (to get a trade agreement by turn 7), followed by “Supply Canals” (for an extra army by turn 12). The extra army (one general, no troops) will be useful for capping deserted settlements. 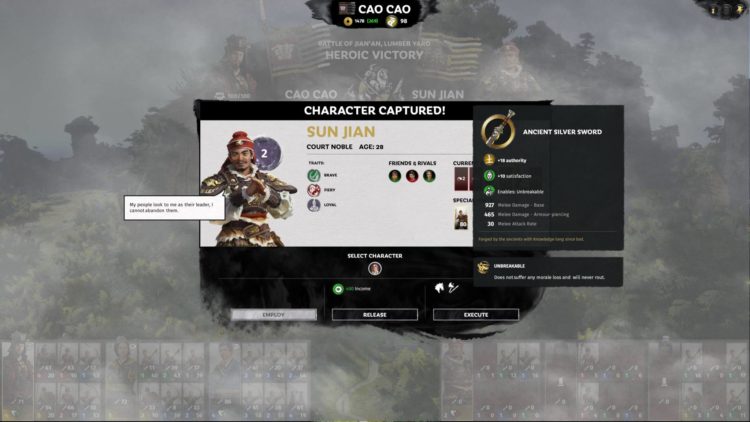 Mandate of Heaven: Cao Cao and the… wait, what Mandate War?

We’ve ignored the Mandate of Heaven‘s Yellow Turban Rebellion completely. We’re not concerned with those developments (yet) since we’re so far removed from the conflict. Your next test, however, will be Liu Hong (not to be confused with the Han Emperor who’s also named Liu Hong). Try to be wary of him when he tries to claim territories. Declare a feud and swoop in to claim his lands.

Note: If you had some deals with Liu Hong, you can cancel them after 10 turns have passed and immediately declare a feud with almost no diplomatic penalties. 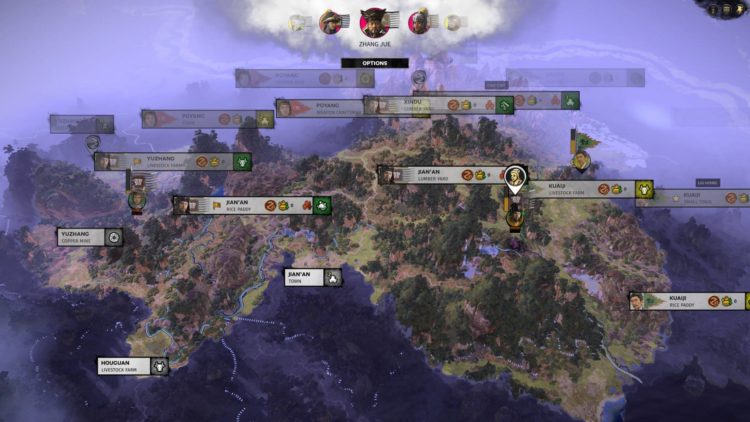 The southern regions have a number of rice paddy settlements with the closest ones in Jian’an, Kuaiji, Nanhai, and Yuzhang. Converting them into the Rice Farming Garrison chain (unique to Cao Cao’s faction) will greatly increase your troop replenishment. The extra food can be used for trade deals. 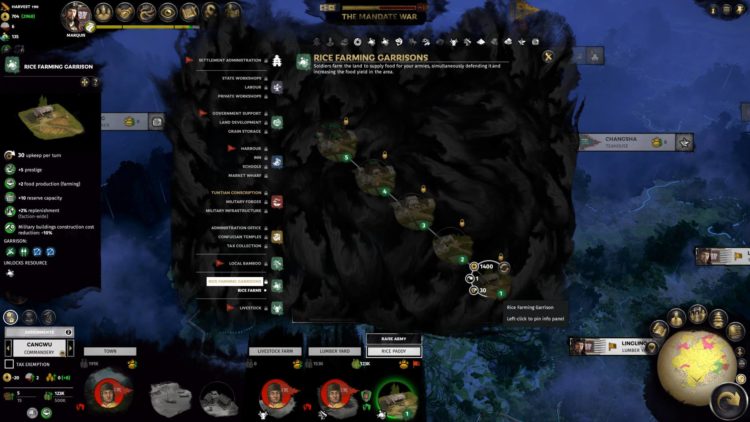 As for your officers, Cao Ren will come of age once you reach turn 12. Your cousins, Xiahou Dun and Xiahou Yuan, will join your faction once you reach the rank of Noble (via prestige). Lastly, Dian Wei is expected to join at around turn 42-43. 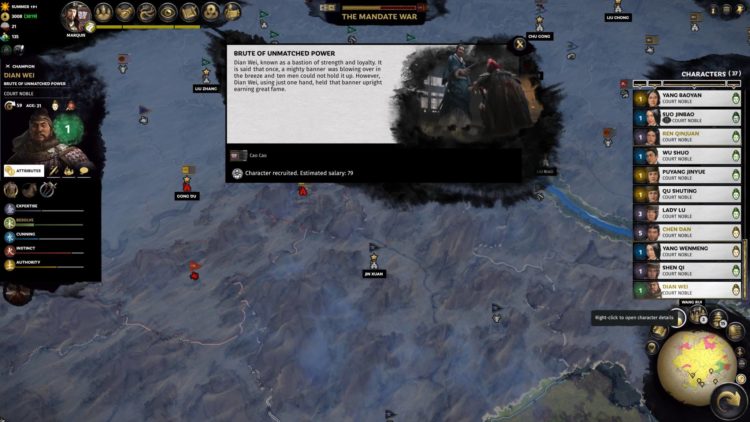 This is the Wei

Once you reach turn 30 or so, take note of all the territories you’ve obtained. Make sure that you have armies prepped and ready to push forward to take Poyang, Lingling, Cangwu, and all the lands beyond held by the NPC Han Empire.

The Han Emperor dies on turn 34 and, by turn 36, Dong Zhuo will dismantle the imperial government type. With all the lords becoming independent, China will devolve into a free-for-all. Declare war on the Han Empire immediately and start your offensive. Most Han settlements are lightly defended as well, and some can even be captured without a fight.

Use the “sack & cap” routine: detach a retinue -> besiege a settlement -> win the battle -> sack it and withdraw -> use the detached retinue to capture. You’ll gain more gold via this method. Use that gold to capture more deserted settlements. Like the relentless Mandalorians, you’re about to show the rest of the world that “this is the Wei.” 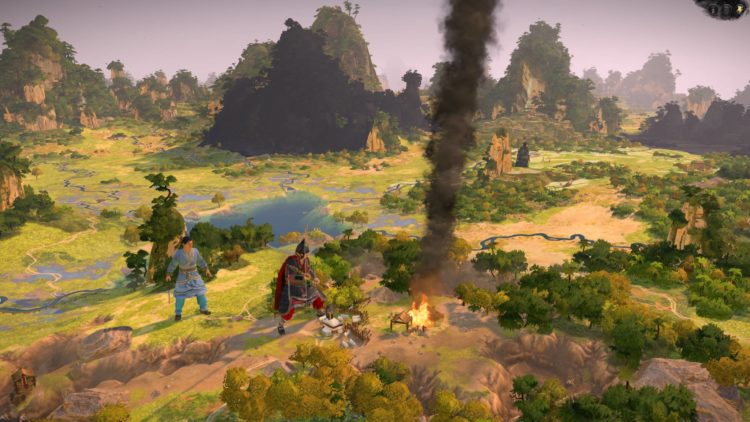 As for Cao Cao’s unique perks, I used some of his Credibility beforehand to boost relationships with Zhou Xin, Lu Kang, and Liu Biao. They’ll be my bulwarks to the north. I also offered some neat trade deals with other lords to entangle them in a web of diplomatic agreements (preventing them from suddenly declaring war).

My coalition partner was none other than Shi Xie. In order to prevent his future plans, I tied his fortunes to Cao Cao’s. This will allow me to expand around Shi Xie’s territories.

With the Southlands firmly in your control, the “Wei in Wu” has become a reality in just a few dozen turns. All that’s left is to increase your prestige rank, use proxy wars to your advantage, build your coalition to face Dong Zhuo, and defeat the Yellow Turbans for good. 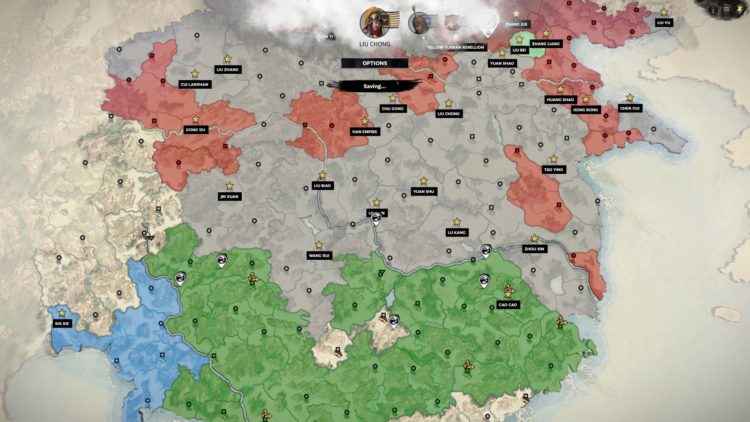 Left 4 Dead 3 is “absolutely” not in development, says Valve