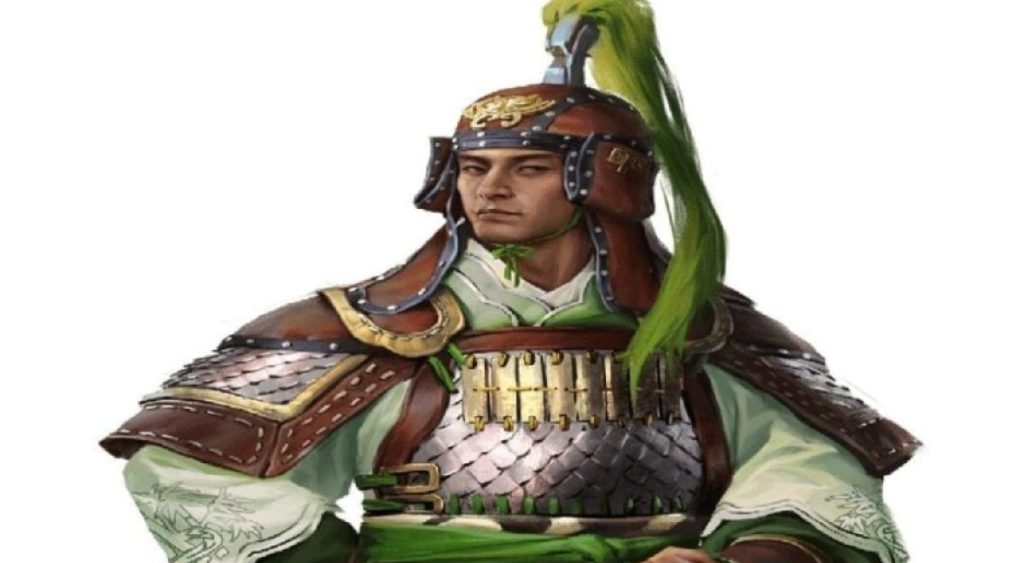 Total War: Three Kingdoms now has its first-ever Chapter Pack called Eight Princes. This DLC focuses on a time period after the collapse of the titular Three Kingdoms of Wei, Shu, and Wu and the rise of the Jin Dynasty. One of the most pivotal characters during this war between the Eight Princes of the Sima clan was none other than Sima Ai. Why did I choose this particular warlord first? Well, that’s because he’s none other than the Sun Jian of the bunch — the easiest choice when you’re going out and about conquering China in Total War: Three Kingdoms – Eight Princes.

Note: We have an official review for Total War: Three Kingdoms – Eight Princes. The review also contains explanations of some of the new mechanics and features in the DLC. 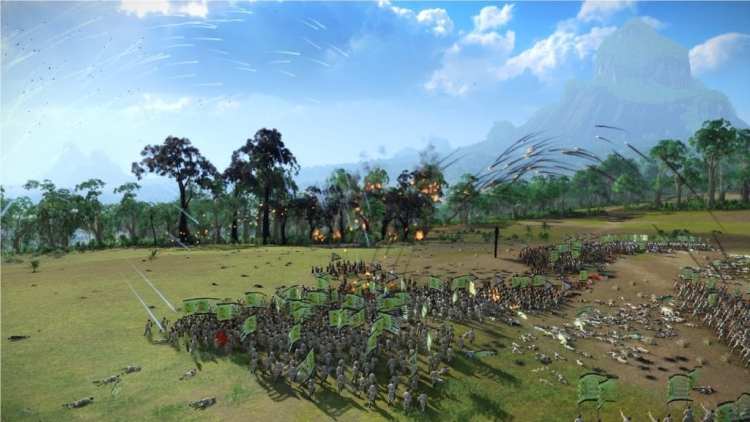 You might be fighting in the jungles or swamplands, and it might be several generations after the Three Kingdoms period had begun, but everyone still loves fire arrows.

Sima Ai was the sixth son of Sima Yan, also known as Emperor Wu, the first ruler of the Jin Dynasty. He’s not even close to the line of succession, but events propelled him to the forefront of the brewing conflict. The current Jin Emperor when you start Total War: Three Kingdoms – Eight Princes is easily manipulated. However, in a rather surprising gesture, Sima Ai, historically, showed reverence to the throne.

According to his official bio:

Sima Ai wanted to reform the government, and amid the constant flip-flop between centralised government and decentralised liberalism during the Later Han and early Jin periods, Sima Ai tried to be a driver for a modern approach to liberalism.

Sima Ai faced a lot of ups and downs throughout his life, often embroiled in someone else’s manipulative schemes. It was in 304 A.D. when another relative decided to start an underhanded plot that his luck finally ran out. Sima Ai was ensnared by these machinations and, despite his best preparations for war, he was suddenly arrested and executed by burning. Before his execution, Sima Ai was known to have composed a heartfelt letter to the Jin Emperor, a touching farewell that also moved the enemy forces who witnessed his end. 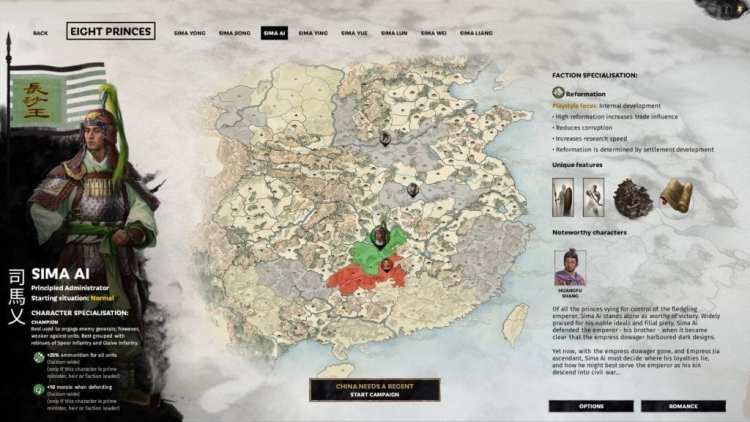 Sima Ai’s reputation as a reformer during those troubled times is emphasized in Total War: Three Kingdoms – Eight Princes. He has a unique resource called “Reformation.” Reformation increases prestige, trade influence, and research rate while also lowering corruption. At the highest tier, it also provides you with +1 Mind and +1 Spirit Alignment each turn. It’s like a brand new Kong Rong.

Here are the ways you can increase Reformation:

Here are the ways that it can decrease:

Sima Ai also has two unique units — the Jing polearm infantry and Jing archers. These are nothing to write home about since they’re not one of the new cataphract units. Plus, you’ve already seen them in Total War: Three Kingdoms if you happened to play as Liu Biao. 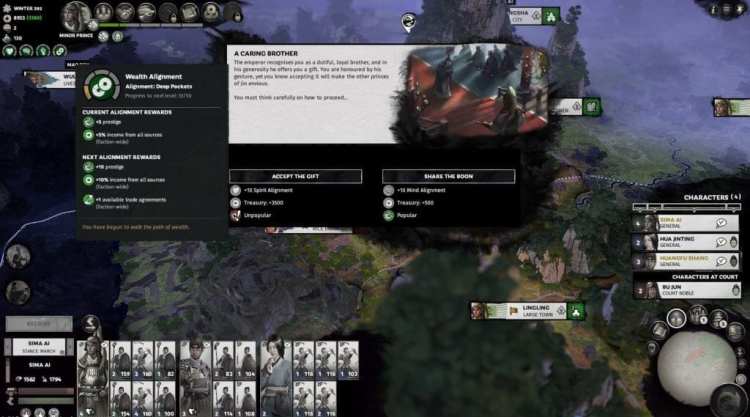 Although higher Reformation boosts Mind and Spirit alignment, you’ll also want to focus on Wealth Alignment (if the choice presents itself). Otherwise, the other two would be apt.

Getting started with your new Sun Jian

Starting out, you’ll have an army to dispatch and a settlement to take over. Check your officers, because you only have Sima Ai’s wife (Hua Jinting), subordinate (Bu Jun), and trusted advisor (Huangfu Shang, also a legendary character).

Eventually, you’ll be able to recruit more. As per usual, try to find those with amazing traits (not ones who’d be disloyal too soon) and focus on a few strategists. Although you’ll notice that some perks/skills have been tweaked (especially for the Eight Princes DLC’s main characters), most strategists will usually have that bonus to commerce, silk, and spices.

Because your focus based on Reformation will be commerce and, to a lesser degree, industry, you’ll need to have several officers that can boost this type of income. Income from peasantry or farms can be a mixed bag (of fertilizer). Although your starting location does have a lot of farm settlements, and you will need food for your cities to grow, those farm buildings will also lower Reformation. 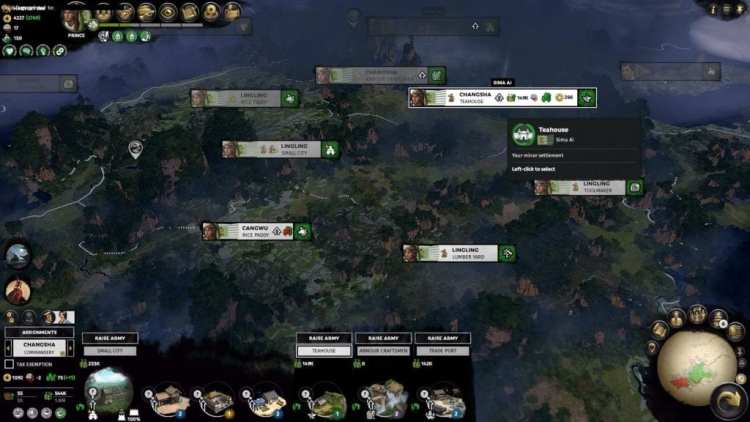 Changsha and Lingling, as well as surrounding territories, will have lots of farms. Just be sure to avoid building or upgrading too many of them so your Reformation level doesn’t drop.

Expanding in the Southlands

Just like Sun Jian and his family a couple of generations past, Sima Ai will have no problem conquering the Southlands. From your base in Changsha in Jing Province, all you need to do is swoop south to take care of any AI minor lords you encounter. Nearby lords such as Sima Chi and Mao Ren are of no consequence. However, since they’re located to your northeast and northwest respectively, you’ll want to keep them tied up with trade agreements and non-aggression pacts.

The rest of the Southlands will open up eventually, and most of it is abandoned. See, I told you, it’s “easy mode” just like Sun Jian’s experience. Major settlements need 8,000 gold for you to colonize them, whereas minor settlements need only 4,000. You might also spot some Jin Dynasty territories here. In Total War: Three Kingdoms – Eight Princes, the Jin Dynasty also acts like the Han Empire in the base game. It’s a complete joke. Try not to poke it early in the game, though, since you’ll need to build your power base.

Go forth and start grabbing all the commanderies you can find such as Nanhai, Hepu, and more. You can even colonize the abandoned island to the southwest (modern-day Taiwan). Because you start near the river, and because you’re not embroiled in any war to the north, you’ll have an easy time making friends as well. It’s not hard to get trade agreements from far-flung lords and ladies.

As for your event choices, always try to go for the Wealth Alignment. Since your Reformation boost focuses on trade influence and the Wealth Alignment adds to your income and trade agreements (with a malus that increases character salary), it’s best that you focus on increasing your gold acquisition. 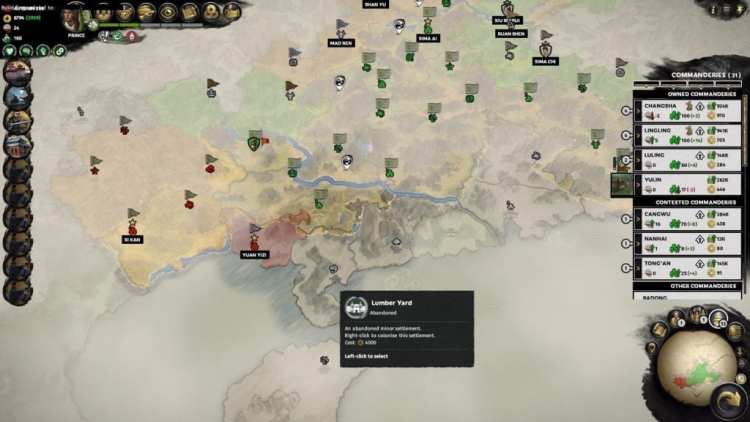 By turn 25 or so, even on hard difficulty, you can sweep through most of the opposition in the Southlands, just like another Sun Jian campaign.

No Man’s Sky Beyond update lets you ride alien animals