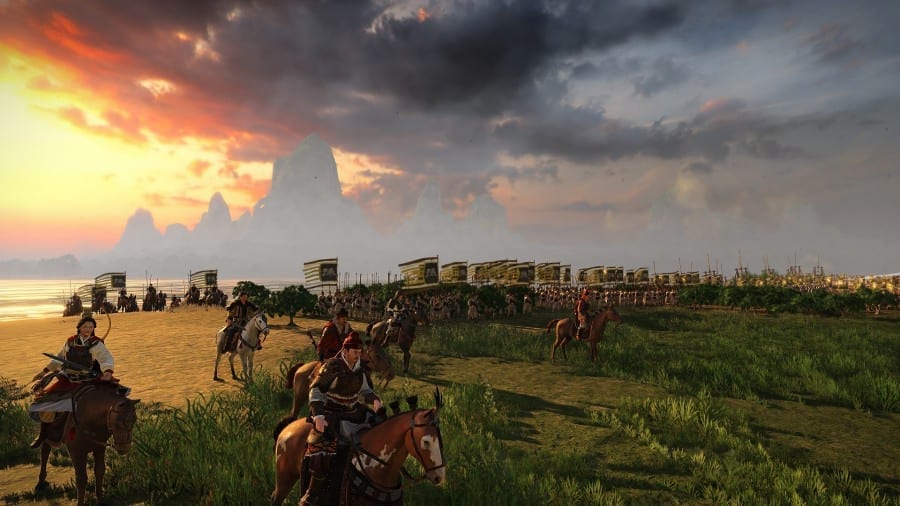 Total War: Three Kingdoms has over a dozen rulers getting set for domination. They all have their own challenges and circumstances to face. There is one, however, that treats this game like a relaxing holiday: Sun Jian. You might as well consider the Southlands as Florida because Sun Jian’s relaxing in South Beach. His playthrough is, without a doubt, the easiest one in the game. We’ve got this guide to help you out in any case as you build your Kingdom of Sun-Wu.

First, take a look at Creative Assembly’s Total War: Three Kingdoms video showcasing the Sun Jian, also known as the Tiger of Jiangdong, as well as his family:

Note: This guide is for the original campaign (Romance Mode/VH difficulty). For Sun Jian’s campaign in the Mandate of Heaven expansion, head over here. Likewise, our Total War: Three Kingdoms guides and features hub has a trove of information for you.

What exactly makes Sun Jian’s playthrough the easiest in Total War: Three Kingdoms? Well, he’s got extra campaign movement range when starting from friendly sea regions. He’s also got extra morale when attacking. His faction, Sun-Wu, or Eastern Wu, or, heck, just Wu, also has access to mercenary units. Unlike regular units, they’re fully replenished and all troops are accounted for. They don’t even need to wait for turns to fully muster.

His unique resource, Heroism, boosts officer satisfaction, keeping everyone happy. You also gain unit recruitment and upkeep discounts. All you need to do is keep winning battles, making sure the enemy loses more troops than you do… which is laughably easy.

But wait, there’s more! Sun Jian’s start location in Changsha has but one major challenge: Liu Biao and his two cronies, Huang Zu and Cai Mao. To the south and east, there’s nothing in your way besides the passive Han Empire just relaxing as well. Beyond these lands are abandoned settlements ready for colonization. Once you’ve dealt with the immediate threat, start building your power base in Changsha and Jiangxia. Make sure you’ve got your armies ready because your faction dilemma will fire within a dozen turns.

Faction dilemma: Keep the Imperial Seal and go to war with Liu Biao and his vassals (historical), or return it because you’re a dweeb. Now, none of us are dweebs, so off to war, we go!

In history, Sun Jian actually died while at war against Huang Zu. He got crushed by a log (or a boulder). It’s definitely not the most heroic death. In Total War: Three Kingdoms, you can roll over Huang Zu’s forces easily enough. From there, you’ll just need to take care of Liu Biao and Cai Mao.

While this is going on, you’ll also be buddies with Yuan Shu, a false emperor who wants to claim the throne. He asks you every now and then to support his legitimacy, giving you gold in the process. Yes, he’s your sugar daddy. 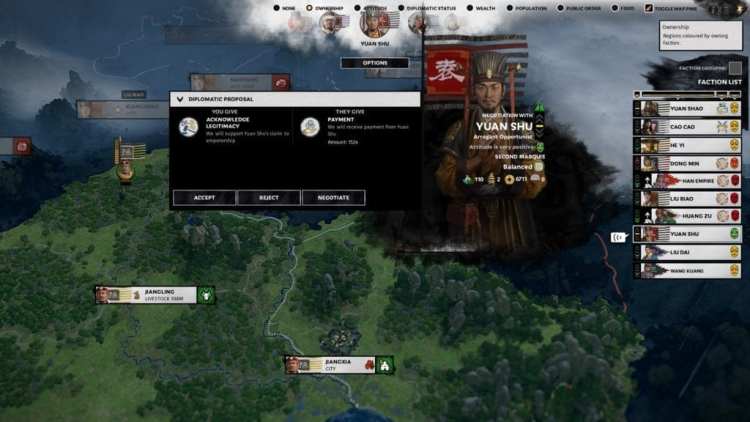 Yuan Shu hands over gold like a drunk leprechaun when you support his legitimacy. He’s an ideal ally from the early to mid-game when you want to conquer him as well.

Sun Jian has Lady Wu as his wife. He also has reliable Cheng Pu and Huang Gai as generals. Sun Jian also has control of the Imperial Seal which is an ancillary (accessory item) in Total War: Three Kingdoms. It confers amazing bonuses for Sun Jian and his entire faction.

Sun Ce is still in his teens, listening to Green Day and scratching his pimples, but he’ll grow to manhood soon enough (within 15 turns). Sun Jian’s two other children (Sun Quan and Sun Ren/Sun Shangxiang) are already born, but it’ll be many years until they become officers. Note that Sun Quan won’t be a legendary character until he hits level 3, which is probably around the time he slashes a table’s corner, so, hey. Sun Family Values: I ended up making Cao Cao my vassal, annexing, and adopting him. His kids were also part of the package deal. Sun Jian’s now a grandfather.

You’ll attract more generals as you progress, including legendary ones such as Lu Meng, Zhang Zhao, and more. As for scripted events, there’s only one that happened for me, and that’s when Zhou Yu joined at around turn 35.

The legendary/unique pirate, Gan Ning, is also in the game, but he did not pop up in my faction automatically. I found him somewhere in Yuan Shao’s armies. Also, there does not seem to be an event which will spawn the two Qiao sisters (Da Qiao and Xiao Qiao), the wives of Sun Ce and Zhou Yu respectively. 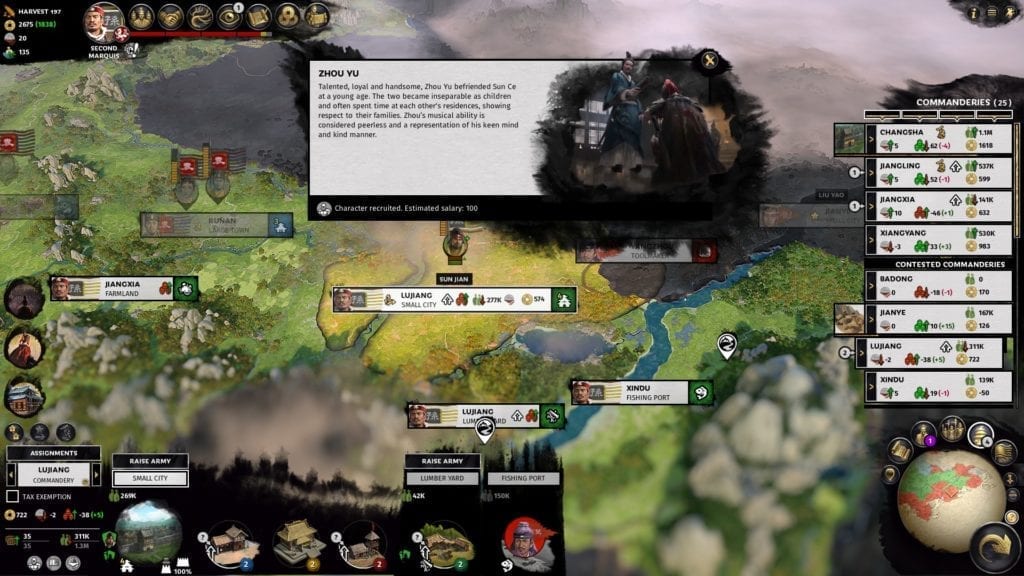 After taking care of Liu Biao, your next agenda is to capture Jianye all the way to the east. This is under the control of Liu Yao. Historically, this is the time when Sun Ce gave up the Imperial Seal to Yuan Shu as a loan so he can borrow troops.

In Total War: Three Kingdoms, you don’t need to give up the Imperial Seal since you have a massive army of your own. You can just play whack-a-mole with the remaining Han Empire settlements, making your way to Liu Yao’s city. You can even defeat the other nobles in the area such as Ze Rong and Wang Lang if they’re still around. After this, it’s the warlord Shi Xie all the way to the southwest.

Anyway, once you’ve pacified the southern and eastern areas previously under Han control, you’ll notice some prime real estate further onwards. These are all abandoned settlements ripe for the taking. The towns cost 8,000 gold, and minor settlements cost 4,000 gold. Your troops won’t suffer casualties if you colonize these areas as well. Also, some settlements have weapon masters, giving you ancillaries for free every few turns or so.

Once you’ve made your way to the sea, then congratulations, because there’s really nothing much you can do here except keeping your populace pacified while your territories earn gold and food. 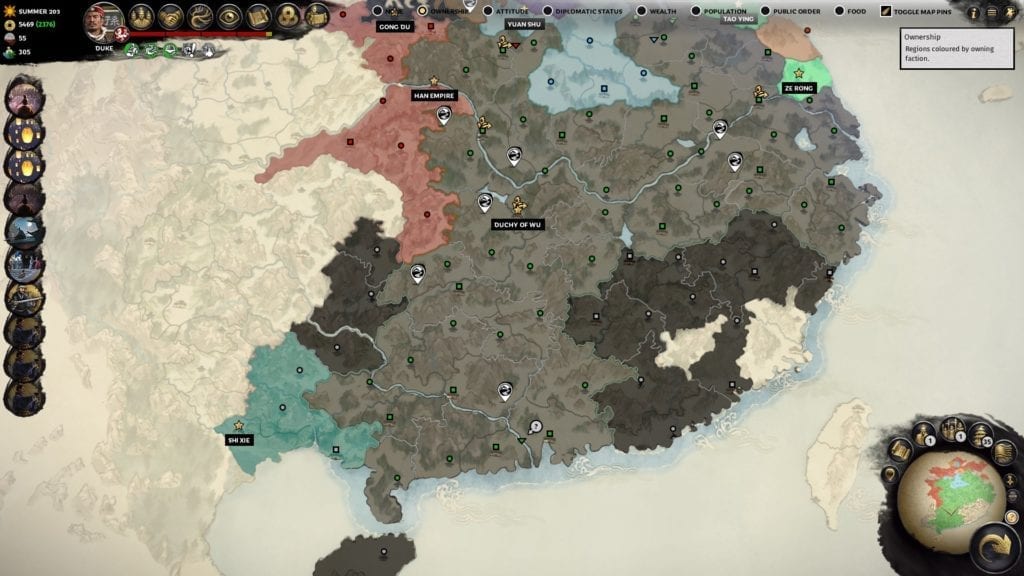 Only turn 60 and I have almost half of China all to myself. The darker areas are uninhabited settlements. You can also see the island of Taiwan which, historically, was visited by the Kingdom of Wu.

Sun Jian’s campaign is like world domination on autopilot. The southern areas of the map are easy to take over, even at higher difficulties. You’ll have little to no issues expanding from Taiwan to Taoyuan.

We hope this guide was able to help you cruise to an easy victory. For more Total War: Three Kingdoms guides, don’t forget to check out our nifty hub over here.

Total War: Three Kingdoms – Everything You Need To Know

By Cameron Woolsey10 mins ago
Guides

By Jason Rodriguez55 mins ago
Guides