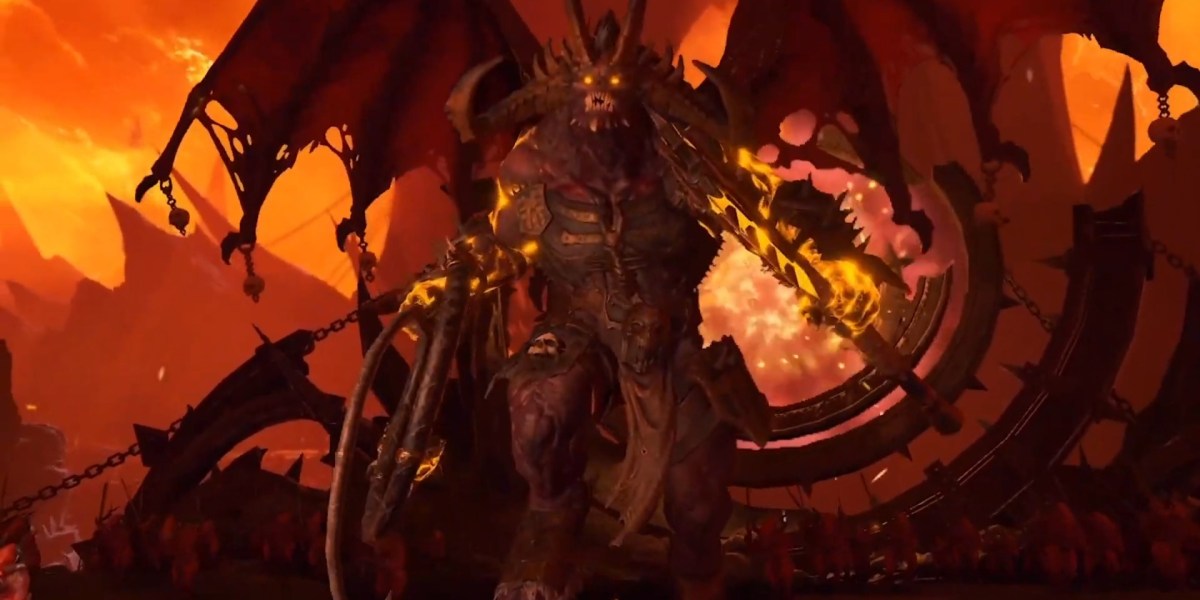 News for Total War: Warhammer III has arrived faster than Khorne’s daemons could make their Khorneflakes. Indeed, Creative Assembly provided more than just a glimpse in a recent gameplay showcase. It starts out with the studio explaining the design philosophy behind the Total War: Warhammer trilogy. That’s followed by the trailer that we saw yesterday. Then, we come to the actual gameplay showcase. It’s all about a new encounter called Survival Battle.

We dive straight into a Survival Battle taking place in Khorne’s Brass Citadel, the one that was leaked earlier this month. Now, though, we’ve got a few more details.

First, it looks like Survival Battles in Total War: Warhammer III will take place inside the Realm of Chaos (with Khorne’s Brass Citadel being just one example). It’s akin to a multi-stage bout with some base-building, tower defense, and RTS mechanics involved. These include capturing points on the map and using resources to construct barricades.

Once you have these structures, it looks like enemy troops will end up getting funneled to a particular spot. You should be able to eliminate them quickly since troops are clustered. 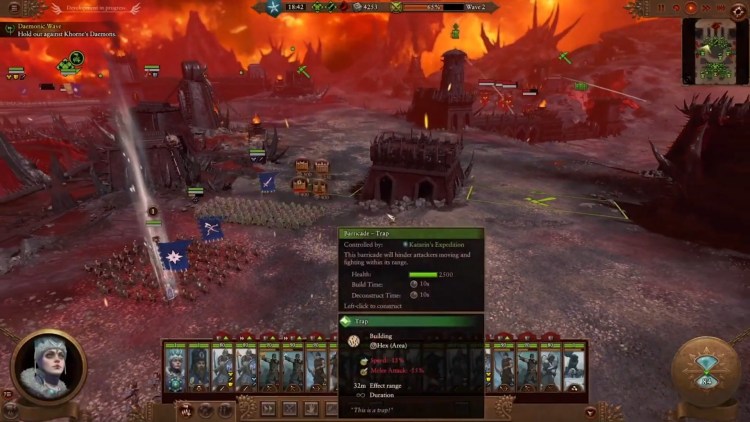 Once again, we’ve got Kislev’s army battling Khornate forces in Total War: Warhammer III‘s Survival Battle gameplay showcase. We’ve only caught a glimpse of Kislev’s own capabilities when controlled by the player. These include the ability to use Lore of Ice magic spells via Frost Maidens and Katarin Bokha, the Empress of Kislev.

There’s also a means of summoning more reinforcements such as Streltsi guardsmen, Winged Lancers, and the Little Grom artillery. Yes, these are cute and cuddly bears pulling cannons. 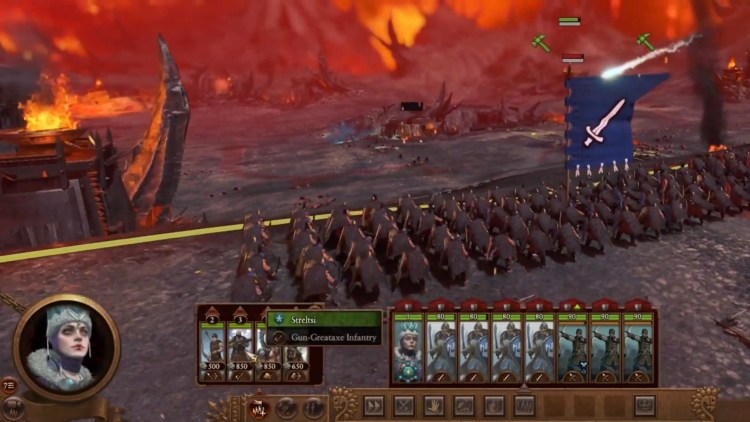 Since Khorne’s forces cannot use magic and they mostly rely on hand-to-hand combat, you’ll want to use your ranged units to whittle down the hostiles. However, if Khorne’s troops get closer, you can expect your units to take a beating.

Thankfully, you’ve got replenishment, upgrade, and buffing abilities via a nifty panel at the bottom of the HUD. Likewise, there’s a Patriarch hero unit that can boost nearby friendlies. 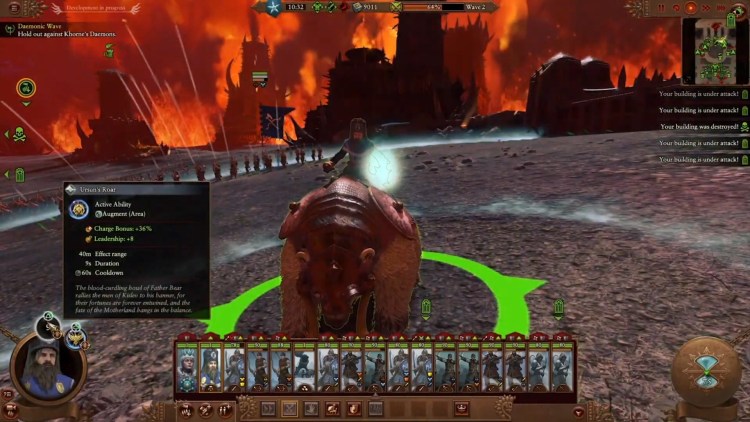 Based on the video, your forces will capture points then move to additional zones. Each new area will have tougher enemies and more spawns, somewhat akin to Doctor Strange spawning portals in Avengers: Endgame. Oh, and foes seem to appear from multiple directions, not just on your left like Falcon.

Naturally, your units will suffer losses over time, so you really need to be careful with your maneuvers and tactics. 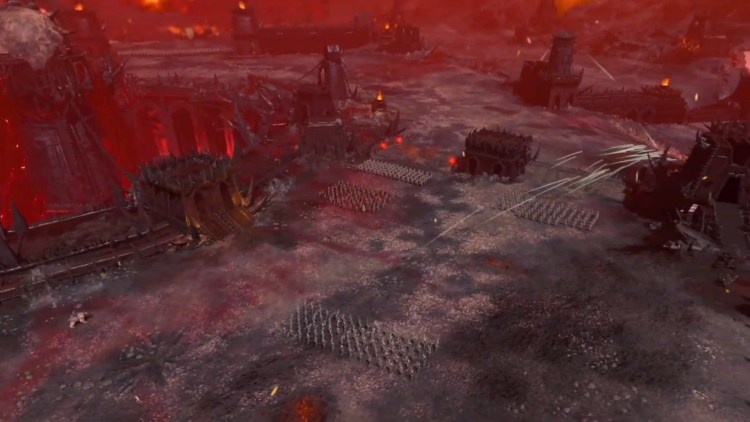 The final area has Kislev’s forces under Katarin attempting to take control of the Blood God’s icon, a giant symbol on the map. Before they can do that, however, a Gatekeeper appears. It’s an Exalted Bloodthirster, one that’ll maul your army with ease.

One way to counter it is to send the Giant Elemental Bear, also known as Snowy Bear (because it’s monstrous and fluffy). With the Bloodthirster distracted, you can move your anti-large units closer to get a few hits in, all while Katarin continues to cast her Lore of Ice magic. 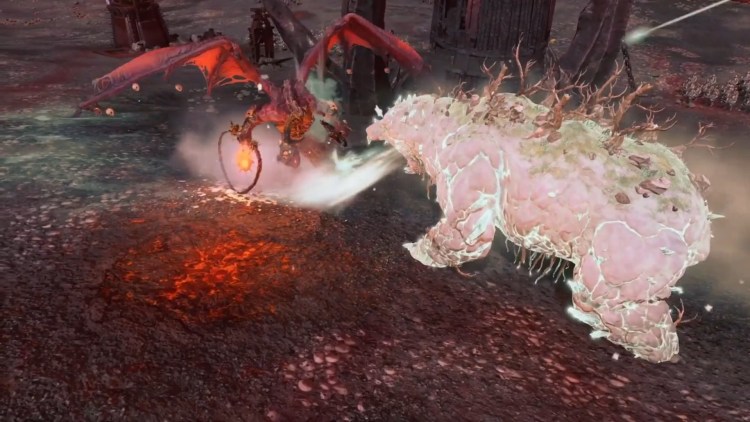 Once the Gatekeeper is defeated and the Daemons of Khorne are routed, victory is yours. But, then again, you’re told that the Brass Citadel is just one domain in the Realm of Chaos and Khorne isn’t the only Chaos God around. Looks like we’ll eventually see bouts involving the forces of Tzeentch, Nurgle, and Slaanesh.

Still, a few questions remain. For instance, we don’t know yet if Survival Battles will play a major role in the campaign or if it’s an entirely separate mode. My guess is that Survival Battles would somehow be part of the campaign’s objectives. Perhaps Kislev’s victory condition entails successfully completing a Survival Battle against each Chaos God in their own daemonic plane (like a reverse End Times). 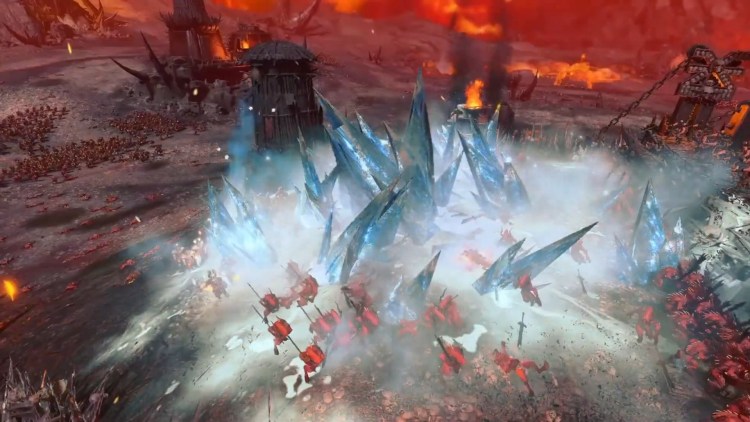 Then again, that also makes me wonder what kind of mechanic the Chaos mono-god factions would have, or how humans could survive inside the Realm of Chaos without turning into crazed mutants. Maybe the “Order” factions would gain buffs or blessings as you progress further in the campaign so that armies become more resistant to the effects of Chaos. That would be a somewhat lore-friendly mechanic.

In any case, we’ll know of more details once we get closer to Total War: Warhammer III‘s release. It’s expected to launch later this year via Steam. For now, you can watch the full gameplay showcase below.

By Alexa BeMent45 mins ago
News