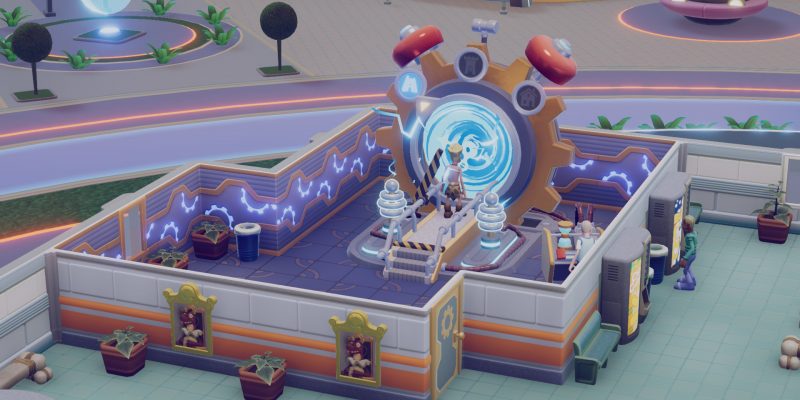 Two Point Hospital has really been around the block with its DLCs. The hospital management sim went green with Off the Grid. Then it got artsy with the Culture Shock DLC. Now, Two Point Hospital is taking a stroll through time with the latest DLC, A Stitch in Time.

If you thought managing a hospital in one time was tough, wait until you try juggling multiple points in time. Two Point Hospital: A Stitch in Time adds a fourth dimension of simulation to the gameplay and will have you time-traveling to three new locations set in medieval, pre-historic, and futuristic time periods.

The time-traveling DLC will add 34 new illnesses for you to treat, some of which are wonderfully named. Bone Head and Retile Dysfunction are two of my favorites. Since you’re exploring time, you’ll also be able to collect some items from across the ages to decorate your hospital with. Of course, there are also new items for you to use to make your hospital run like clockwork.

The main antagonist (he’s really more of a pain than a bad guy) of Two Point Hospital: A Stitch in Time is Captain Yesterday. He’s an inventor and entrepreneur. He’s also totally full of it. Captain Yesterday has invented a new device called a ‘Yesterizer.’ It’s a no mess, no fuss means for carefree time travel. Allegedly.

The ‘Yesterizer,’ it turns out, has some teething issues. While Captain Yesterday is out peddling his product to the good people throughout time, you’re building, expanding, and improving your hospitals to take care of all the new time-related ailments.

Two Point Hospital: A Stitch in Time is out now and retails for just $8.99 USD on Steam. Between now and March 2, you can pick up the DLC for 10% off. You will need the base game to play the DLC. So, if you haven’t got that yet, you’ll need to grab it from Steam first.