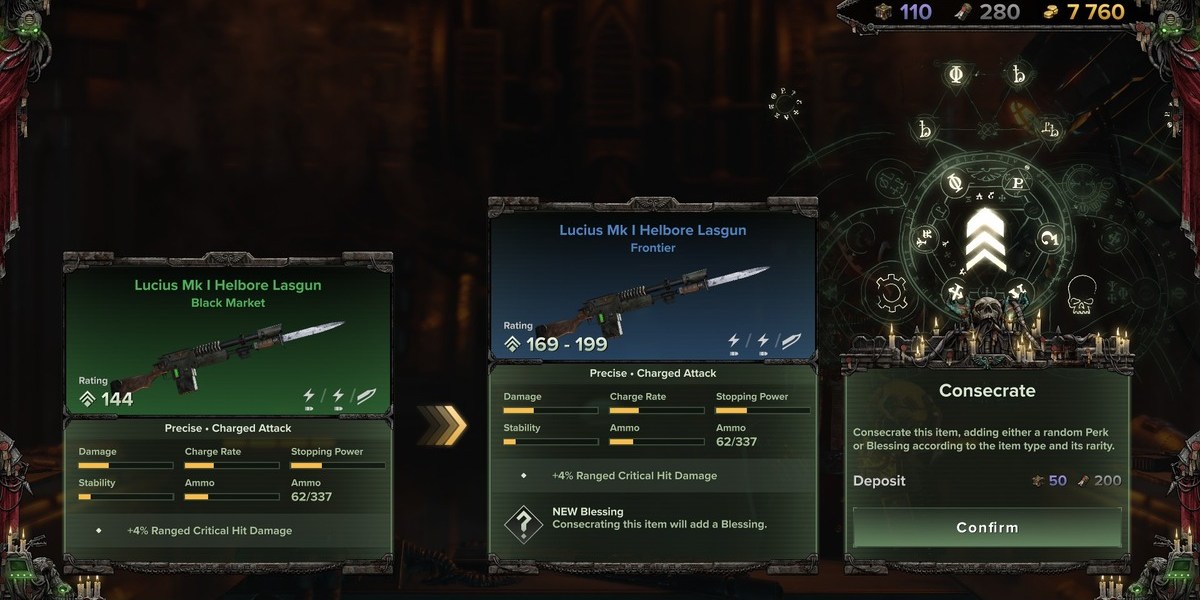 The Lasgun is a curious piece of kit in Warhammer 40,000. It’s not the strongest weapon in the setting, and many people jokingly refer to it as “flashlight.” This is what happens when you have no armor penetration capability and only incapacitate human-sized targets 50% of the time. Nevertheless, the lore keeps telling us that Guardsmen love the Lasgun’s reliability, and some even forego other weapons to stick with it.

Too bad the gameplay in Warhammer 40,000: Darktide, the one game where you’re actually playing the Imperial Guard, is absolutely uninterested in this trope.

Why Warhammer 40,000: Darktide is hurt by the loot treadmill

As soon as you start Darktide, you’re shackled to the eternal loot treadmill. For every mission you beat, you are likely to get an incrementally better version of the gun you had before. Your current Lasgun is rated at 289 power. The new one you discovered is rated at 295 and does 5% more damage to heretics as long they’re blond and Sagittarius. Clearly, the new gun is better in every way, so you throw the old one without much thought. And that is a shame. 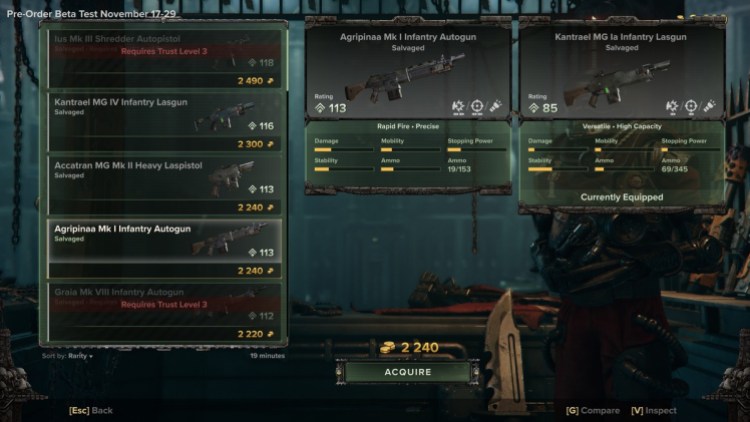 This screen kills magic more surely than any Inquisitor could ever dream to. Screenshot by PC Invasion

No love for the gun around here

Fantasy, sci-fi, history, no matter the setting, we always encounter the trope of the warrior and their favored weapon. We’re not talking about mythical blades like Excalibur, meant for great things from its inception. No, I mean stuff like Heavy’s Sasha, Varric’s Bianca, Arya Stark’s Needle — and yes, Jane’s Vera. Unfortunately, when it comes to gaming, developers are less interested in us forming bonds with our weapons than they are at extending play time.

Throw a rock at an FPS sale and you’ll hit a game like that: Cyberpunk 2077 is full of incrementally better pistols; Destiny 2 has players discard looted guns more often than they get to use powers; Borderlands prides itself for having more guns than sense. And so on and so forth, until the player believes there’s nothing more transitory under the firmament than their main weapon.

Oh, I understand why this is the case, or at least I have a satisfying theory for it. It’s all in the box — the Skinner box. You’re the rat: you click, you get a gun. The gun has better numbers than your current gun, and this is enough to trick the brain into releasing the ‘achieving-thing’ happy juice. And while the gun is kinda fun, if you click LMB more, you get a better gun! And so it goes, with game developers hacking your brain into thinking that the game is more fun — or more worth playing — than the core gameplay of shooting and stabbing would suggest.

And the loot treadmill whirls on despite the fact that your slightly better guns don’t improve your situation at all in Darktide or any of the aforementioned games. You need a better power rating to take on higher difficulty levels, but once you get there, you’re facing off against the same enemies. But Filthy Heretic now has 125 health instead of 100. This is less enemy scaling, and more of an endless race of a background number.

This is very easy for game developers to implement. It doesn’t require new animations, new mechanics, new enemy tactics, or anything else. If you’re lucky, the Filthy Heretic has gone through a palette swap and is now magenta rather than mauve. But he’s tougher now since he comes from, uh, Cult of Undying — a very strong cult The identically armed guys with identical armaments you fought previously came from the Cult of Lessdying. 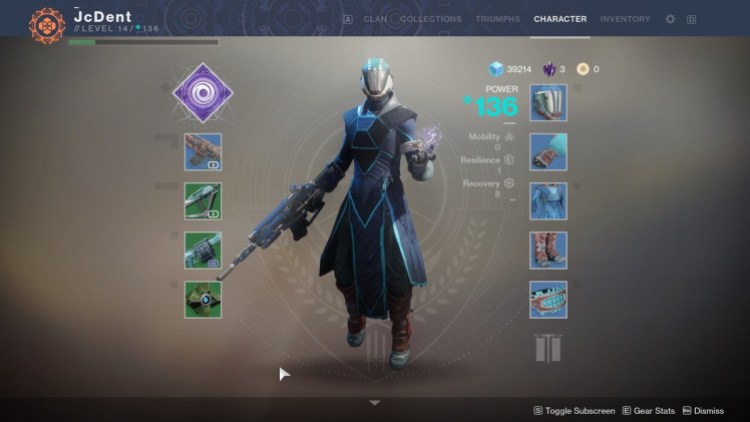 Behold! My ultimate 136 points of power. Screenshot by PC Invasion

Granted, that’s more of a stab at how Destiny 2 does things. As far as I know, Darktide, much like Warhammer: Endtimes – Vermintide, is absolutely disinterested in justifying while you’re still fighting the same guys, but they’re stronger now.

And thus, if you bow out from the game after finishing every mission once (which I what I did in Vermintide 2), you’ll have had have a fairly short game. You may be left wondering whether the game was really worth the full price. And, if my main goal is to be immersed the world of Warhammer 40,000 rather than a ‘Left 40K Dead,’ I don’t really get much out of repeating the same maps on higher difficulties. There’s no more plot, no more lore to discover, and the only mechanical thing pushing me forward is getting a Krieg Shovel +6% Martyrdom for a mission or two.

There’s the right way to craft guns, and the wrong way

I can, of course, invest some of the other currencies in Darktide to increase the arbitrary power stat at the Tech-Priest. They will also bless it with an entirely random perk. Five percent more damage against the weakest zombie in the game? Omnissiah, keep still my beating haemopump. 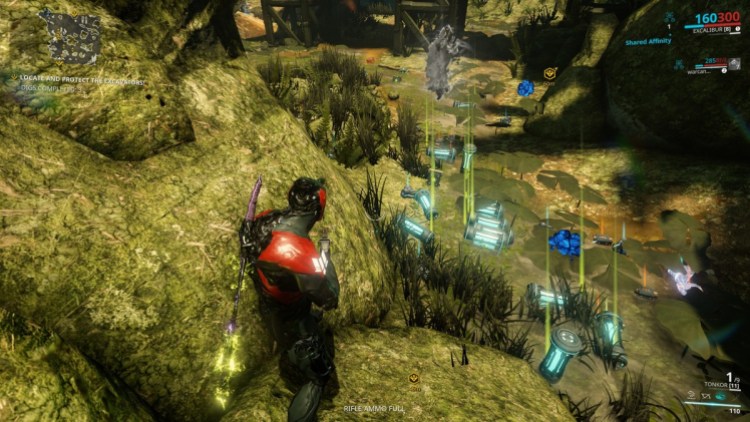 An admitted downside of Warframe is all the resource grinding. But that’s the beauty of taking inspirations: you don’t have to lift it wholesale. Screenshot by PC Invasion

Weirdly enough, it’s Warframe that’s the closest to getting the “My Gun” vibes right out of all of these games. Sure, the Grineer your face by the time you get to Uranus are very similar to the ones you shot during the tutorial. The crucial difference, however, is that you can still be working with the same gun you had at the start. That’s due to the fact that a lot of kit in Warframe are sidegrades rather than straight-up upgrades, and because you can absolutely upgrade the shit out of the weapons you already have.

So while Destiny 2 allows you to grind up a few 500 power rifles to bring your 469 power rifle inline with your current arbitrary power level, Warframe does much more than boring stats increases. You can collect upgrades that meaningfully change how the gun works and, eventually, even name it. And you can add penetration bonuses, change damage types, whatever. Sure, it’s not as cool as adding a bayonet, but it’s more ‘My Gun’ than anything Destiny 2 can manage.

So there I am, dashing through the snow in my Excalibur, doming Corpus with my Braton. 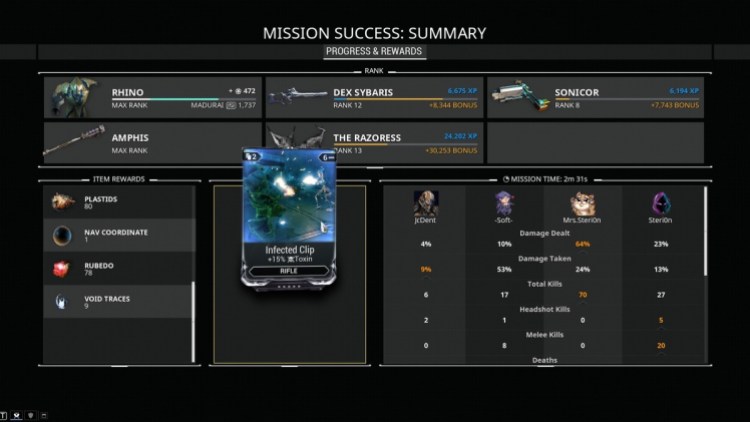 This would make a Braton MELT fools. Screenshot by PC Invasion

Why can’t we have that loot experience in Darktide? You already have different ‘gun families,’ so give me a Kantrael MG Laspistol that’s a more balanced gun than the close-range Kantrael MG IV or the chargeable Lucius MK I Helbore Lasgun. Just make each family into a single gun and allow me to fiddle around with the internals. Allow us to replace parts with ones that offer better damage at range, or optimize mag sockets to get more juice out of the magazines. I’d like to reconfigure my stock to balance the weapon better for use with the bayonet I just stuck on the front.

As long as each upgrade changes something meaningful about the game, and comes with certain drawbacks/alternative costs, having me go a bit Escape from Tarkov on my gun is a surefire way to drive up my engagement with the title and my character.

The loot treadmill goes on in Darktide

And if the desire for weird bonuses persists, tie it into one of the strongest cosmetic opportunities presented by the Warhammer 40,000 setting: turning your gun into a piece of art an Orthodox priest would like you to return to his church. The religious zeal of the Imperium of Man and the way the setting appreciates detailed embellishments is all the excuse you need for visuals that go beyond a mere palette swap or a trinket hanging off some random exterior greeble.

From just marking very important kills on the butt, to getting some cybered-up adept to scrimshaw a scene from the life of Saint Celestine that you’ll bolt to side of the gun, the rich aesthetic customization can be what brings those small bonuses while avoiding straight-up magically enhancing the gun. “Look,” I say, “this brass relief of Salamanders surrounded by flames is the reason why my gun does 10% more damage to unclean Infested enemies.” 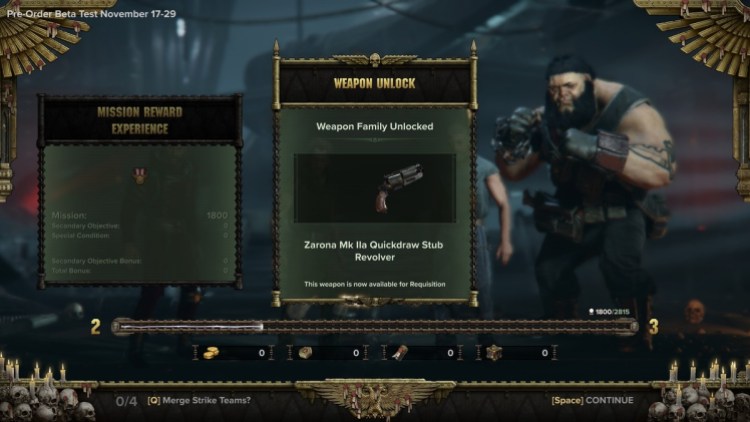 Why unlock a family of guns if you can just give me the gun and let me go silly with upgrades? Screenshot by PC Invasion

Or, for a simpler implementation, tie it to the Penances system like Hardspace: Shipbreakers did with the tool stickers. Warhammer 40,000: Darktide (and other games mentioned) are cooperative experiences, and being able to show off your achievements just by the gun exterior alone would be amazing in public multiplayer.

Of course, taking the Skinner box loot mechanics away from Warhammer 40,000: Darktide, Destiny 2, and others would require more development time for less guaranteed playtime, so we’re never going to get it. After all, large AAA games require large capital, and large capital is nothing if not unimaginative. And that’s why we can’t have nice guns.