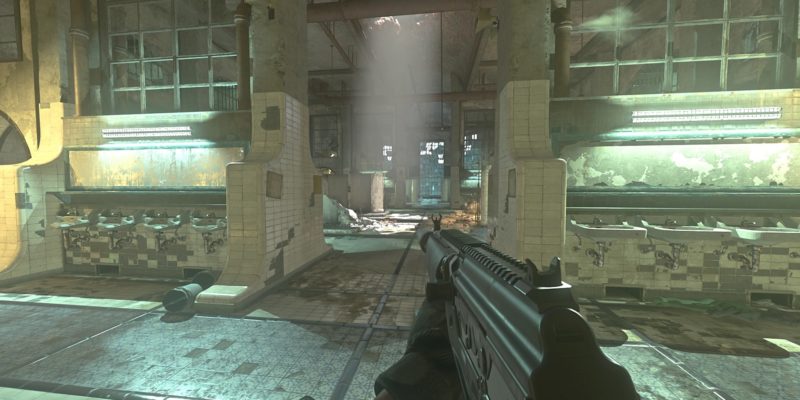 There’s little doubt that for most that the current go-to assault rifle is the Kilo 141. It’s extremely low recoil coupled with a surprisingly solid damage profile makes it difficult to compete with. However, there is one other assault rifle that remains a serious option even in the sweatiest of lobbies. After a handful of buffs, the CR-56 AMAX may very well be the most versatile primary in Call of Duty: Warzone Season Two.

The CR-56 AMAX is based on the real-life IWI Galil ACE. A direct successor to the Galil seen in the original Black Ops game. It is an Israeli assault rifle well known for its reliability and versatility across a wide range of distances. Modern Warfare represents this well with the AMAX arguably being the best gun to run without a secondary switch. In other words, there isn’t really ever a situation where this gun is completely outclassed.

One of the biggest reasons for this is that the CR-56 AMAX possesses one of the most impressive damage profiles in all of Warzone. When shooting the upper torso, the AMAX has a profile of 42-38-33-28. This gives it an effective time to kill through full armor of 486 milliseconds up to just over 40 meters. Even at maximum damage fall-off, the AMAX still manages a theoretical time to kill of just 740 milliseconds.

That very competitive time to kill is further enhanced by the AMAX’s tremendous recoil properties. Or more specifically, it’s notable lack of any unpredictable recoil. Unlike many other high-caliber assault rifles in Warzone, the CR-56 has practically zero horizontal bounce. This makes attachments that reduce horizontal recoil like the Commando Foregrip unnecessary. Being able to spec purely into vertical recoil gives the CR-56 AMAX incredible laser beam potential. As we know too well, it’s the laser beam assault rifles that tend to dominate Warzone.

Unfortunately, despite its impressive damage profile, the AMAX does suffer on the fire rate front. It has a fire rate of 645 rounds per minute which is below average for the assault rifle category. For comparison, the Kilo 141 comes in at 751 RPM whilst the M4A1 manages 808 RPM. Because of this, you will get punished hard for missing shots.

When building a meta-tier CR-56 AMAX for Warzone, there aren’t many opportunities to switch things up. What you see above is more or less the best possible build, although there are a couple of potential tweaks.

As always, the Monolithic Suppressor is a must-have on any assault rifle. Not only does it keep you off the radar, but its 15% increase to bullet velocity should make hitting those long-range shots far easier.

The CR-56 AMAX has so little horizontal recoil in the first place that you’re better off just doing everything possible to minimize its vertical recoil.  The XRX Zodiac S440 Barrel will add better bullet velocity, recoil control and an increase in damage range to the weapon. At the same time, using the Commando Foregrip Underbarrel improves your accuracy by providing some valuable recoil stabilization and aiming stability.

As a side note, its lack of horizontal recoil makes the AMAX a great choice for controller players who may not have the same level of recoil control as their mouse and keyboard counterparts. Unfortunately, the Zodiac barrel does decrease movement speed by 3.2%, strafe ADS speed by 11%, and hip-fire accuracy by a steep 68%.  Simply, this is not a run and gun build. Be sure to take your time hitting shots and prioritize pre-aiming where you think an enemy could appear.

As this is a 7.62mm caliber gun, we are limited to just a 45 round magazine rather than the preferred 60. This can make chaining kills together in trios or quads somewhat difficult. Finally, equipping the VLK 3.0x Optic is the best sight to complete your class as the zoom level will allow you to shred enemies at medium and long ranges. 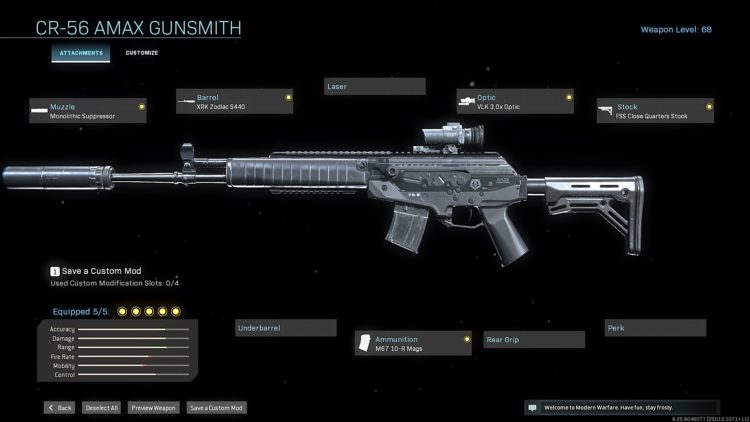 For most weapons, the high damage SOCOM rounds are relatively niche, fun choices for messing around in multiplayer. This is because despite their incredible time to kill, the constant reloading makes them far less practical than the regular ammo. But, this only somewhat applies to the CR-56 AMAX, which has the best high damage rounds in Warzone.

What make the M67 10-R Mags unique are that they can kill in as little as three shots, even in Warzone. That fact gives this build a theoretical time to kill of just 194 milliseconds, which is unheard of amongst automatic weapons. Even without headshots, this can still kill in well under 400 milliseconds.

For this build, we drop the strafe stock in favor of pure aim-down-sights (ADS) speed. Honestly, the extra strafe speed doesn’t help that much on this build as you need to take your time lining up shots. Also, the 10 round magazine rounds produce next to zero vertical recoil so there’s no need for any underbarrel foregrip.

Instead, I’d recommend putting on some kind of optic to make hitting those difficult long range shots easier. I personally opt for the VLK 3.0x since you may as well take the recoil reduction bonus even if it’s not necessary. Alternately, consider either a reflex sight of choice or even a thermal optic if you don’t mind the harsh handling penalty that comes with it.

This guide was updated by Lauren Sayles on March 26, 2021 to match Season Two changes.