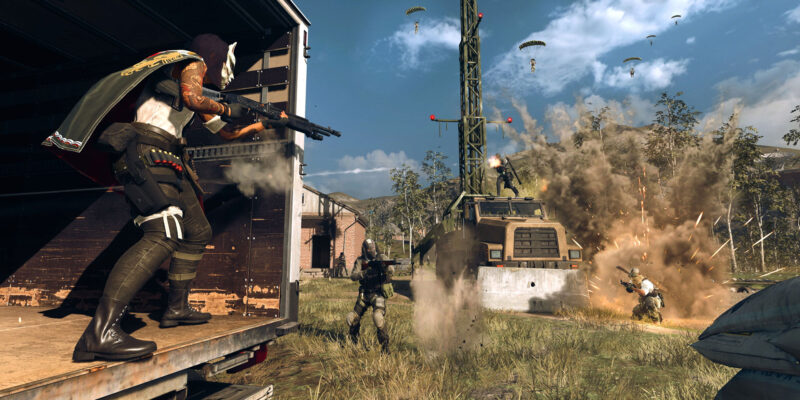 Call of Duty: Warzone Season Five Reloaded has introduced some new experiences into the game. From new game modes, to details of a seasonal event, Season Five has not been short on content. At the same time, a hefty weapon tuning patch was rolled out. This hit a multitude of weapons across the majority of categories. Now, a further Warzone weapon tuning patch is making its way into the battle royale. Developer Raven Software shared the details of the Warzone weapon updates on Twitter, which include a Krig 6 nerf.

Firstly, the FARA 83 assault rifle has experienced some further balancing through decreasing its damage, but increasing multipliers. The maximum damage has been decreased from 29 to 25, and the minimum damage from 25 to 23. Therefore, the head multiplier has received a boost from 1.35 to 1.56. Also, the neck multiplier has been increased from 1 to 1.2 and the upper torso multiplier from 1 to 1.1. Next, the Krig 6 has been nerfed once again in Warzone, to give it more recoil and decrease the neck multiplier from 1.3 to 1.1. With the Krig 6 solidifying itself in the meta for a long time, it will be interesting to see if the weapon becomes less dominant.

Another popular weapon that has been hit with a nerf is the OTs 9 submachine gun. Its recoil has been slightly increased, while the maximum damage has been decreased from 34 to 31 and the neck multiplier has been reduced from 1.35 to 1. However, the minimum damage and headshot multiplier values are higher, meaning it can still be a powerful secondary weapon. As the TEC-9 is available as floor loot, it is important to note that the gun has been hit with a slight nerf to its damage.

Apart from the Krig 6, the Stoner 63 has also featured heavily in the meta. However, the recoil, gun kick, and raise interrupt time of the Stoner 63 have been altered. Ultimately, this gives the weapon more light machine gun traits, now hosting more downsides compared to an assault rifle.

The barrels of some Tactical Rifles have been rebalanced with this Warzone weapon tuning update. The aim of this is to improve fire rate when using certain barrels on the AUG and M16. Beginning with the AUG, the 18” Rapid Fire barrel now increases fire rate by 6%, compared to the previous 5%. Additionally, the 17” Titanium Barrel fire rate increase is now 8% from 7%. With the AUG also receiving a reduction to its recoil, it may prove to be a strong contender on the battlefield. Finally, the M16 has been hit with the same changes to the 16.3” Rapid Fire and 16.3” Titanium barrels.

The meta in Verdansk ’84 and Rebirth Island is always changing. With this latest round of weapon alterations, including the Krig 6 nerf, you may want to switch up your Warzone loadouts for future matches. As Raven Software keeps monitoring each and every gun, the weapon tuning updates probably won’t stop here. Call of Duty: Vanguard is right around the corner, and its integration with Warzone will provided a whole new set of balancing challenges for Raven to figure out. For more, make sure to check out our Warzone guides and features hub.

👀 Here's an early look at the Patch Notes: pic.twitter.com/oTk1OIK79K