WWE 2K20 wasn’t in a good spot when it originally released back in October. Since then, it’s had several patches and the latest one even included a feature to create your custom championship. Following that, the developers also released the latest 2K Originals DLC, Wasteland Wanderers which Backstage Pass (a fancy name for a season pass) owners will have access to. You’ll be duking it out in a post-apocalyptic wasteland with towers starring Seth “The Wanderer” Rollins, “Drifter” Elias, “Survivor” Rhea Ripley, and more. Check out the video below:

If you’ve already seen what the Bump in the Night DLC provides, then Wasteland Wanderers will offer something very similar. That can be a good thing if you’re into this sort of content, or it can be a waste of time (pun intended) if character reskins aren’t to your liking.

WWE 2K20‘s wrestlers that are part of this 2K Originals offering have been renamed owing to the post-apocalyptic, Mad Max-esque theme. There are also some campy stories involved, mostly just back and forth banter before you start your match. Oh, and some matches follow the “scripted” formula of “do this action first” before “here’s the next step.” 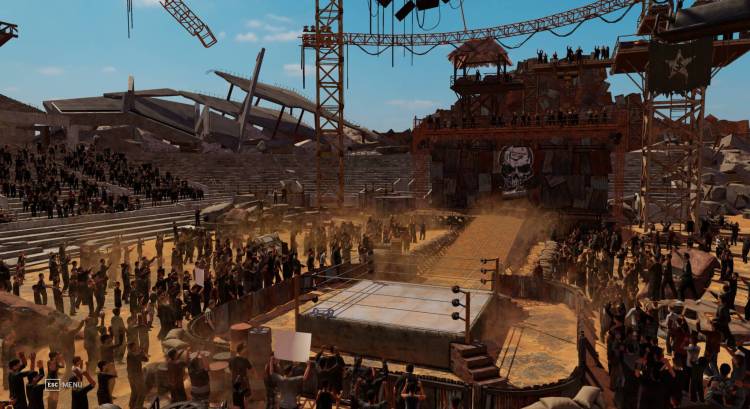 Seth Rollins is the star of the main tower where he’s climbing the ranks of the gauntlet. In the end, he’ll have to face off against “Overlord” Samoa Joe. Other towers include “Survivor” Pete Dunne battling with “Raider” Velveteen Dream. Of course, completing matches and towers reward you with new attires, CAW parts, thematic weapons, and more.

YouTube channel The101 also has a video of all the new moves, entrances, victory animations, and arenas:

In case you haven’t noticed, Konnor and Viktor (The Ascension) are missing. One of NXT’s most dominant tag teams turned jobbers on the main roster aren’t in the base game. Given their “Welcome to the Wasteland” catchphrase, you’d think they’d be part of a DLC called Wasteland Wanderers. They aren’t.

So, yes, everything is mostly reskinned as far as I can tell. It does feel quite lacking. Then again, you’ve got your wrestling moves and animations, plus extra CAW parts if these would put you in a festive mood.

Do take note that although 2K has mentioned that the Wasteland Wanderers DLC is now available, it doesn’t show up as a separate purchase in WWE 2K20‘s Steam store page. I’m not sure if this is a bug (due to my store region), or if it’d be made available later on once the store page has been updated. For now, you could check the official website as well as our WWE 2K20 guides and features hub.