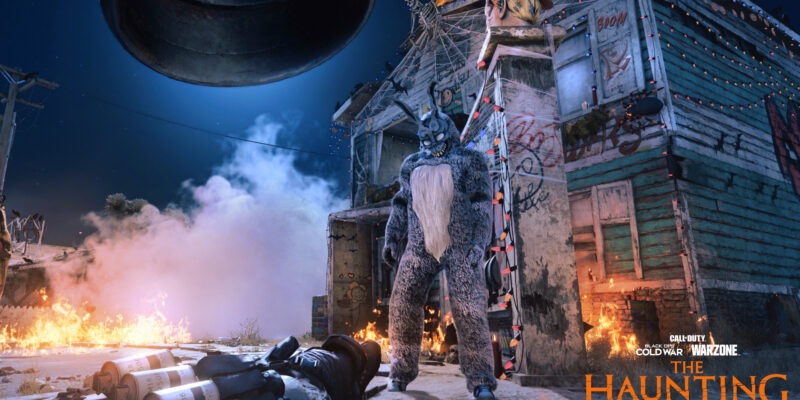 The Haunting is well underway in Call of Duty: Black Ops Cold War and Warzone. The event has seen the introduction of some new spooky game modes, a new submachine gun to unlock, called the LAPA, and more. Also, players have been able to get in the Halloween spirit with cosmetics that are fitting with the season. Already, Call of Duty has done a crossover with Scream, with Ghostface joining multiplayer and the battle royale mode. Now, Donnie Darko is here with a new bundle in the Black Ops Cold War and Warzone in-game store.

If you have seen the Donnie Darko film, you will recognize the frightening rabbit costume. The skin is identical to the movie, so it is guaranteed to give your opponents the creeps.

What is in the Donnie Darko bundle in Black Ops Cold War and Warzone?

The Donnie Darko bundle is full of cosmetics that you can take to the battlefield. It contains a Donnie Darko-themed assault rifle, submachine gun, and sniper rifle blueprints. The limited-time bundle is a tracer pack: when you shoot the blueprints, you will see purple electric tracer fire and electric dismemberment. Additionally, in zombies you will see electric elemental damage. If that was not enough, the bundle contains a jet engine charm, a time lapse watch, a deadly finishing move, and and emblem and calling card. To top it off, you will receive one hour of double XP so you can progress through the season even faster.

You can purchase the Donnie Darko bundle in Black Ops Cold War and Warzone for 2,400 Call of Duty points. As the bundle is only available for a short time, you will want to get your hands on it sooner rather than later if it’s up your alley. With Ghostface being extremely popular among players, it is likely that Donnie Darko will follow (rabbit) suit.