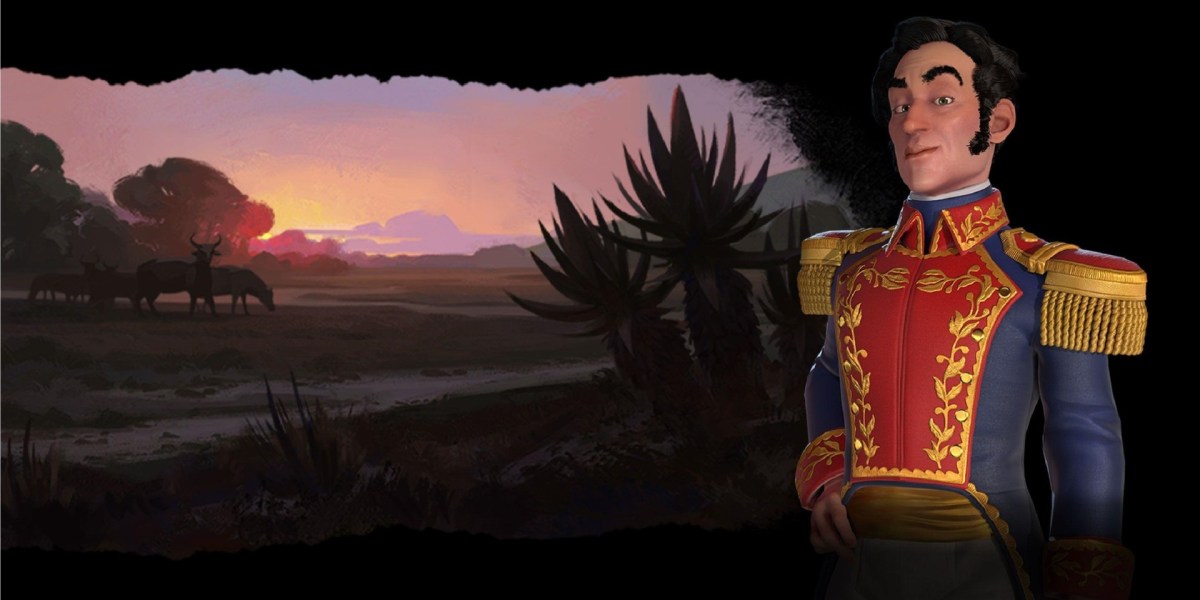 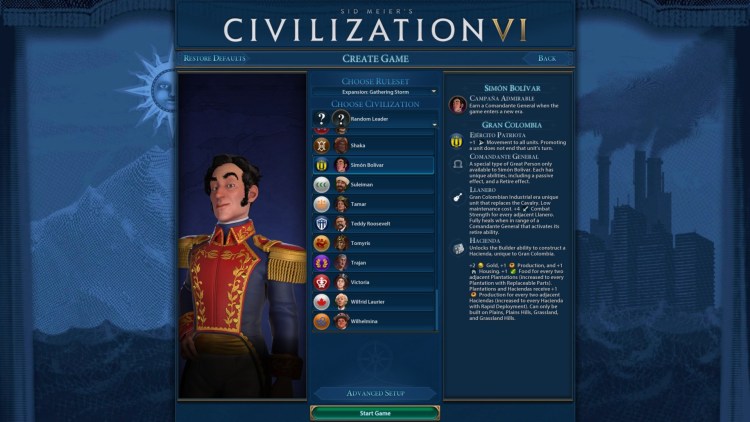 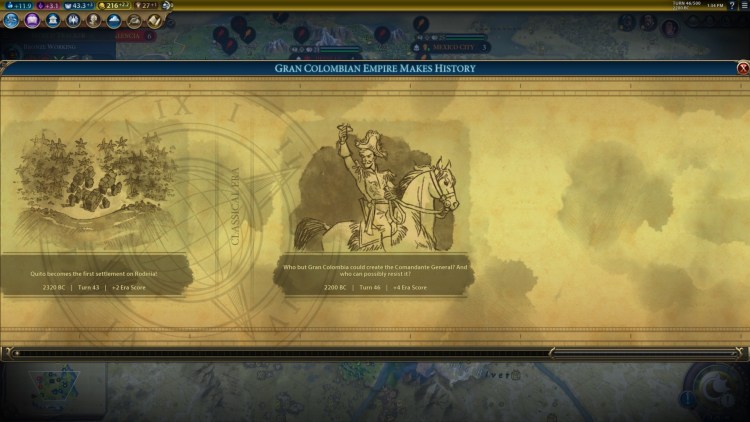 The Comandante General also has a passive that adds +5 combat strength and +1 movement to all land units within two tiles regardless of era. You may still earn Great Generals while playing, however, some of their passive effects might be restricted to units from certain eras. A comparison between the two can be seen in the image below: 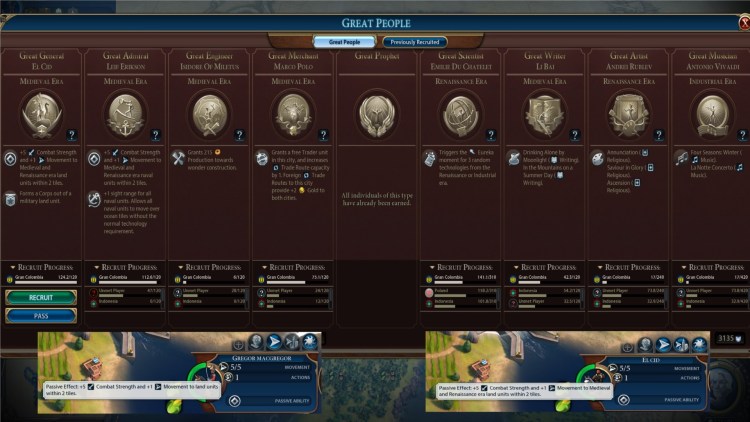 Gran Colombia’s unique capabilities are tailored for rapid expansion across Civilization VI‘s map thanks to the Ejercito Patriota unique ability:

Combined with Simon Bolivar’s Campaña Admirable ability and the Comandante General, you’ll breeze through Civilization VI matches in no time. It’s also very likely that you’ll focus on a domination victory, though you can try to adapt based on the circumstances. 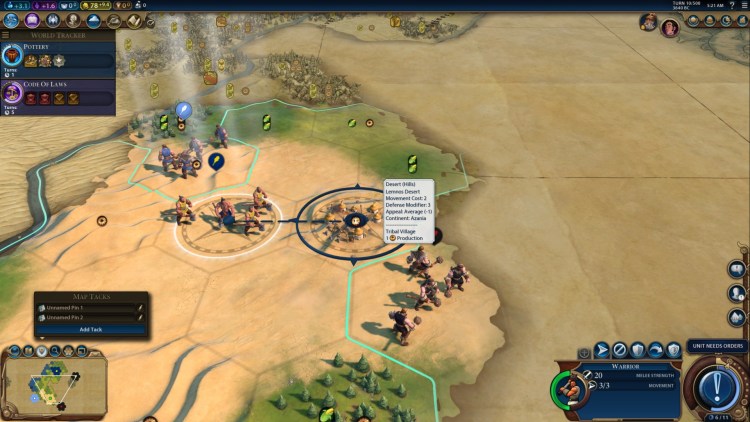 Finding a good start location might be the biggest challenge when it comes to Civilization VI: New Frontier Pass. In the case of Gran Colombia, you’ve got your Haciendas that can only get maximized yields depending on adjacent plantations (and other Haciendas). As such, if there aren’t a lot of resources where Plantations can be built, then you’re missing out on obtaining most out of their unique improvement.

I had to restart a dozen times while trying to look for locations that can have multiple Plantations nearby. We also need to make sure that we’re starting on a hill and river to improve our production capabilities: 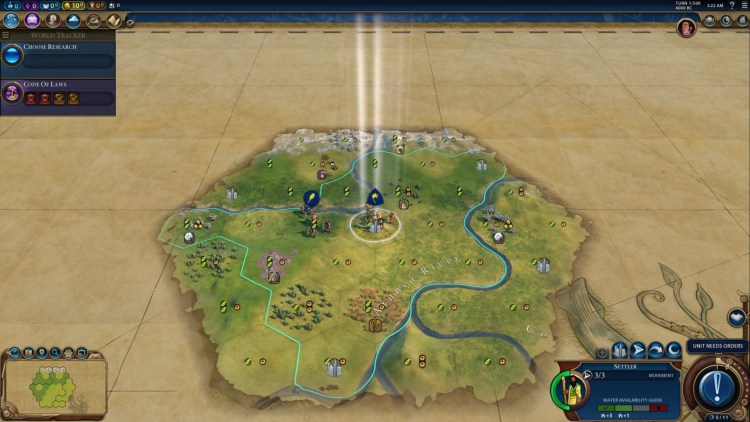 That won’t work… and neither will this one: Finally, I just gave up and decided to stick with what the RNG gods gave me. The start location is decent (gotta love those mountains) and I’ll be able to build a few Haciendas surrounded by a couple of Plantations due to the incense resources: As you can see, many of the suggestions here focus on unit production. After all, we’re swarming the Civilization VI world with Gran Colombia, right? Still, you don’t need to switch to every single one all the time. Pick the ones you need depending on the situation and keep building the necessary units. I didn’t focus too much on religion in the early-game, at least with Gran Colombia. Religious units do get the +1 movement, but the civ itself is suited for domination and not a religious victory.

Still, when presented with a pantheon choice, do try to pick Religious Settlements since this gives you a free Settler (a quick way to catch up to the AI in a Civilization VI deity game). Alternatively, choose God of the Forge to increase production for Ancient and Classical Era units (which is when you’d do most of the rushing).

Although a domination-centric civ, I found that Gran Colombia benefits a lot from Amani during a deity playthrough. This is mostly to ensure that you’re controlling a city-state that can provide backup during wars (either as a distraction or via levied units). Otherwise, Magnus with “no population cost” settlers and food from trade routes remains a great choice. 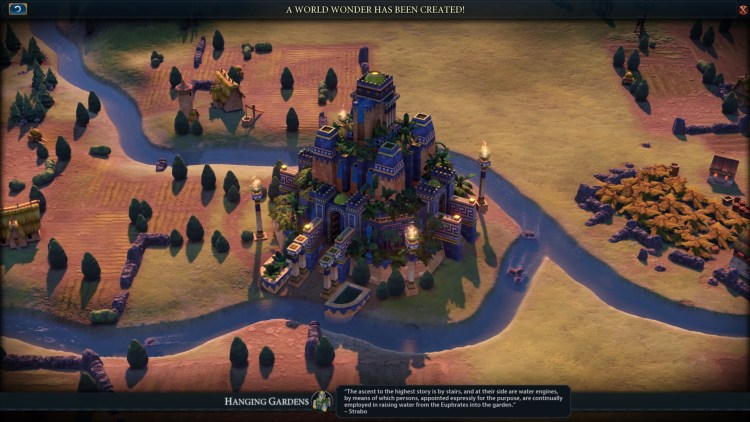 You’ll find yourself at war very early in Civilization VI if you’re playing on deity difficulty, most especially if you’re up against warmongers. Even if you’re going up against peaceful leaders, they’ll still stab you in the back when the opportunity arises. As such, your objective as Gran Colombia is to bolster your military and play aggressively as soon as possible.

With the +1 movement point from Gran Colombia’s unique ability, your initial Warrior and newly-recruited Scout should be able to spot some decent locations or village huts. You could even encounter the other civs. After this, get a couple of Slingers ready (and make sure to kill some barbarians to get a boost to Archery). 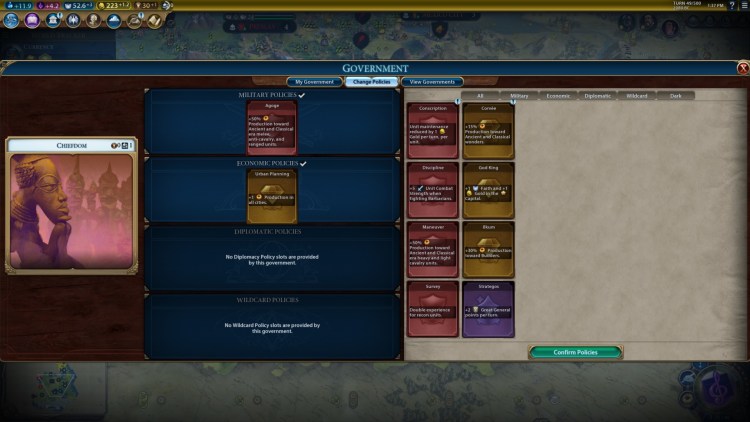 Get your Settler to an ideal location for your second city. The goal now is to have the Agoge and Urban Planning policies (seen above) to boost our production.

From here, adapt accordingly. If barbarians spotted your cities (or an AI opponent is close), have a Warrior or Slinger on standby. Alternatively, go ahead and recruit Workers so you can start improving some tiles. Once you’ve researched Archery, go ahead and make more Archers. It might be a bit costly to upgrade your Slingers, but if you have the extra gold then that’s fine.

Philip II of Spain (seen above) was the first AI civ I encountered as Simon Bolivar and Gran Colombia. How fitting that we’d see a showdown between the king of the colonizers and the eventual liberator, eh?

Spain was northeast of my location, but he was getting too close for comfort. Harald Hardrada of Norway, meanwhile, was to the northwest. I knew they’d both attack me soon enough, so I had to get my defenses ready. Since I had enough units, I continued to improve some tiles and construct walls, monuments, and granaries.

As soon as we entered the Classical Era, which was when I got my first Comandante General, I advanced with my Archers and a couple of Warriors: Thanks to the extra movement point, the Comandante General, and flanking, Philip’s main army was either wiped out or retreating within a couple of turns Also, you’ll notice that I’m the suzerain of Lahore, a new city-state added in Civilization VI: New Frontiers: 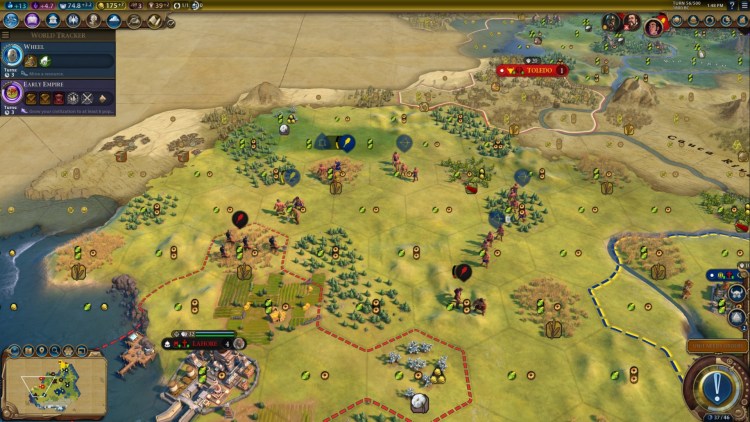 Since Philip’s cities didn’t have walls yet, the “Archer Rush” made quick work of his defenses. Oh, and you’ll also notice that Preslav (another city-state subject) was harassing Philip’s remaining troops: 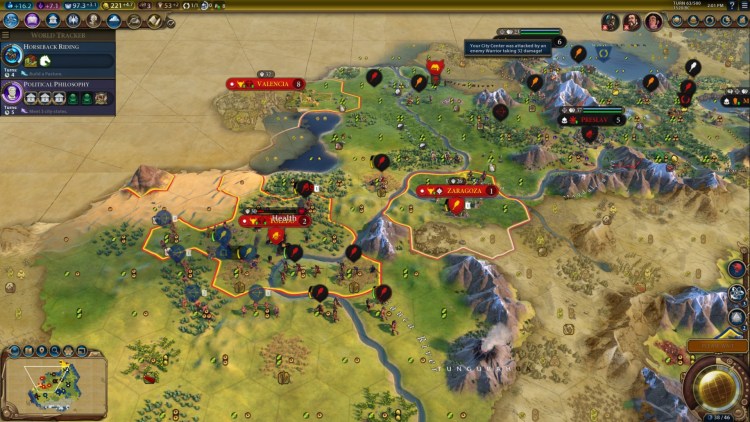 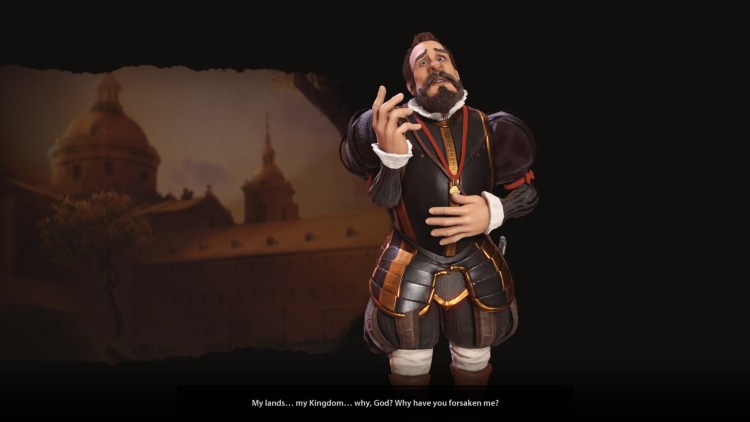 While I was fighting with Spain, Norway decided to invade my settlements. Too bad he had to go through hills, rainforests, and a couple of city-states that I was already a suzerain of. Since I had two Archers waiting (and Ancient Walls), Harald’s offensive was blunted. He ended up suing for peace, then denouncing me later and making unnecessary demands: 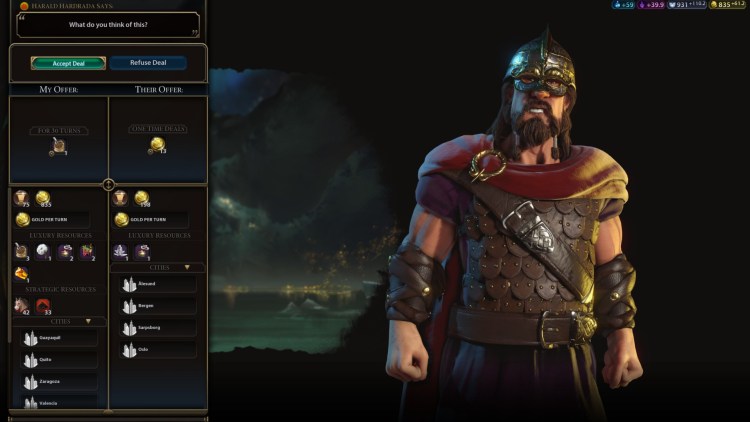 Back to Spain again, and I realized that Philip thoroughly focused on Holy Sites. Obtaining his lands, therefore, led to high faith generation. I eventually converted my cities to Catholicism (the religion Spain founded because I’m a sucker for history) while recruiting Nihang troops (unique units from Lahore). You can see the Nihang unit’s upgrade tree in the image below, and you’ll also notice that I’m about to eliminate Norway: 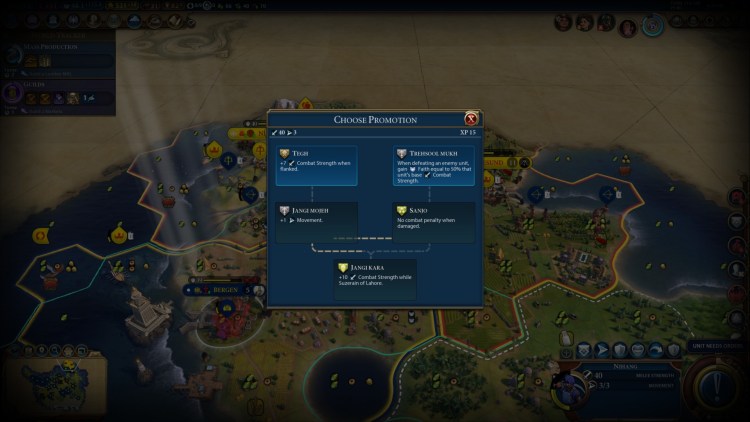 With the elimination of Norway, I was finally in control of the entire continent. Two other civilizations remained — Poland and Indonesia — but I was already ahead of the curve thanks to early-game conquests. I was free to do what I’ve set out to do in this Civilization VI: New Frontier Pass deity campaign and that’s to build some Haciendas. Oh well, now I’m just disappointed: 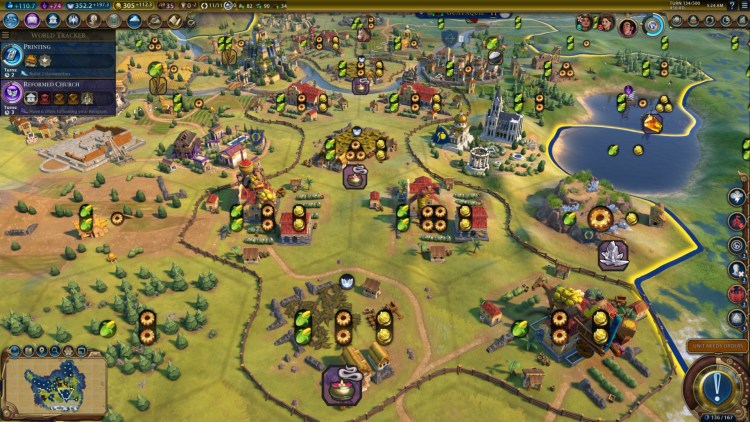 The point is, I was wrong to focus too much on a start location that would maximize the yield from Plantations and Haciendas. I learned that the hard way when I realized that the yields wouldn’t necessarily be as good as I imagined them to be. Plus, their bonuses aren’t as dependent on location and terrain compared to the other faction added by Civilization VI: New Frontier Pass — Lady Six Sky and the Maya.

Combined with RNG factors, everything became too situational when it would’ve been better to stick to the basics — that Gran Colombia is an early-game powerhouse if you build and recruit properly. If you’re able to time everything right once you get your first Comandante General, then you can surge ahead with that momentum. Should everything go well, then the rest of your Civilization VI: New Frontier Pass playthrough can become a cakewalk. If you’re playing on lower difficulties or a Pangaea map, then you might even take out your opponents in record time.

Where would I rank Gran Colombia in our Civilization VI tier list? I can’t say just yet. Given the updates with the New Frontier Pass, I’d like to give the previous civs another try. I do think Gran Colombia is up there with the likes of Mongolia (Horsemen Rush), Nubia (Pitati Archer Rush), and the Zulu. However, I’ve usually had more luck going for domination when playing as Hungary or the Ottomans.

Civilization VI: New Frontier Pass is available on Steam. The Maya and Gran Colombia Pack, already included in the season pass, can also be purchased separately. For more information, check out our guides and features hub.