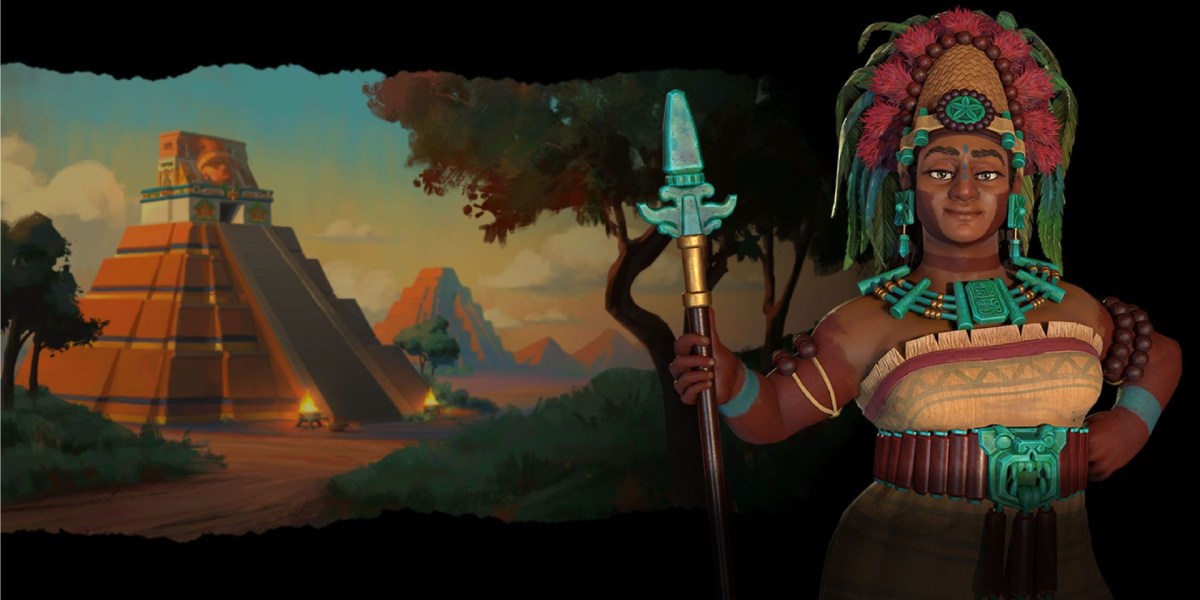 The Maya return in Civilization VI: New Frontier Pass (which happens to include the Maya and Gran Colombia Pack). The Mayans are led by Lady Six Sky and they’re pretty good for deity runs, though they can also be severely hampered by bad RNG. Here’s our deity guide to help you out. 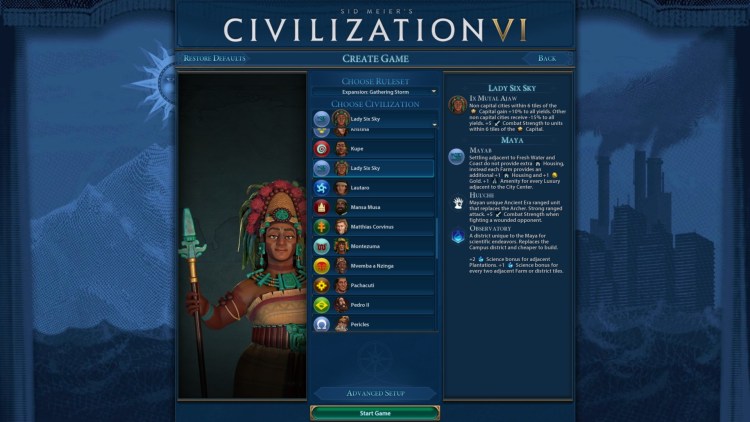 Due to Lady Six Sky’s Ix Mutal Ajaw ability, you don’t want to have Mayan cities that are too far away from your capital as they’ll have lower yields. As such, you’re going to have to play “tall” (fewer but densely populated cities) instead of “wide” (more cities that have lower population; cities scattered all over the map).

In terms of city placement, a general rule is to use the “double hexagon” — the perfect geometry of sorts. The suggestion was put forth by Civilization VI Redditor Aweseman which works well on any difficulty mode. You can see a sample grid below: You need to ensure the following if you want to reach the Maya’s full capabilities:

If you want to see an awesome start, here’s one from Civilization VI Redditor JNR13. Take a look at those three adjacent sugar resources (plantations) and flat tiles (farms) that can surround an Observatory. That’s the dream: Mind you, that’s the ideal scenario, though it can be a bit tricky depending on your game settings. You may even need to pray to the RNG gods just to give you a great seed.

You can see an example below of what I thought was an “okay” start (I even got faith from a village hut and was able to get a free settler). Unfortunately, too many hills, mountains, and geothermal fissures — and too few plantation resources — meant that I’d lack housing or Observatory boons. Oh, and venturing further east made me realize I was near the coast already: You’ll notice that we’re following a somewhat similar progression as that of Simon Bolivar and Gran Colombia. That’s because, instead of doing an “Archer Rush,” we’ll end up doing a “Hul’che Rush.” 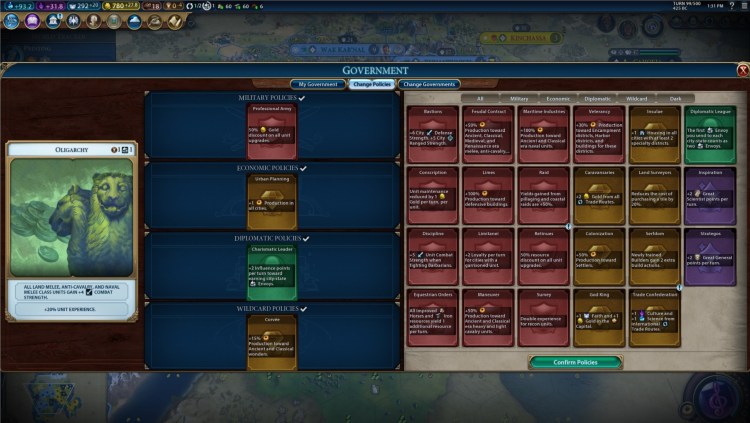 For Civilization VI deity games, I prefer Religious Settlements thanks to the free settler. You can quickly get your third city and churn out more units thanks to bonus yields as long as you’re within six tiles of the capital. Alternatively, Divine Spark remains very useful thanks to increased Great Scientist generation (and you’ll have a lot of Observatories anyway).

Here are some beliefs you could pick if you’re focusing on religion with the Maya: Magnus is the best choice for your Civilization VI: New Frontier Pass playthroughs as the Maya. One of his perks provides extra food if you have a trade route from a secondary city that’s going to your capital. The other lets you recruit settlers from his assigned city without a population drop. Your second Governor pick should be Pingala thanks to his additional boosts to science and culture yields. Your playthrough as the Maya in Civilization VI: New Frontier Pass will be highly dependent on the game’s state within the first few turns. Warmonger civs on deity difficulty will likely rush you if you’re close by, whereas other civs further away might just ease up a bit. The goal is to have a strong standing army ready to defend (or attack) at a moment’s notice. You’ll see a somewhat “okay” starting location below since the Yosemite wonder is close by: The reason why we want a couple of Slingers early (instead of Scouts) is that we can quickly upgrade them into Hul’che once we get Archery. We’re also going to need a few farms so our Observatory gets science yields, hence why it’s important to recruit a worker early. If you feel that your starting location is already well-defended by Slingers, recruit a settler to claim lands.

I was able to pump out enough faith thanks to the God-King policy, a village hut, and a nearby Religious city-state (Kandy), allowing me to pick Religious Settlements for my Pantheon: 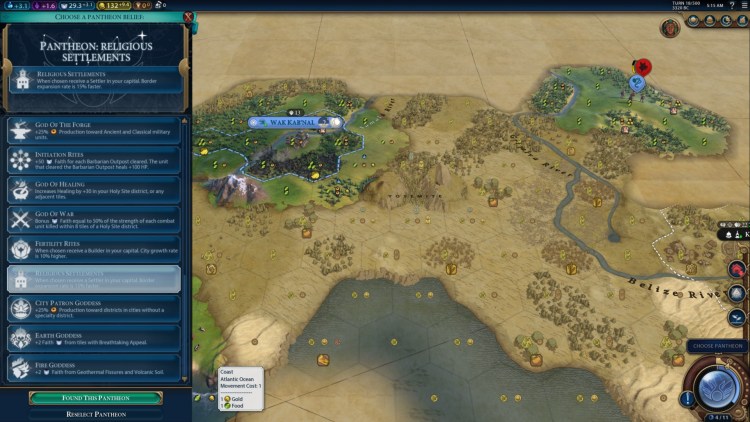 Take note of the pins I’ve added to the south of my capital. These mark the placement of my next cities and their respective Observatories: The first civ I met was China and you can see additional pins to the north: 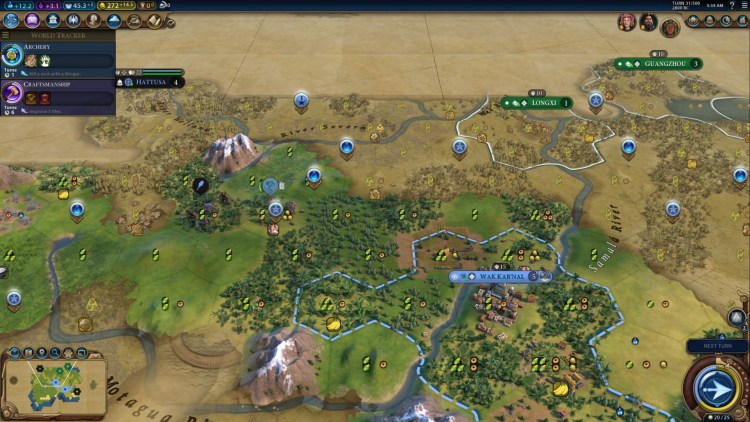 As with most Civilization VI opponents on deity difficulty, they’ll forward-settle to lock you down. It’s a detriment to them because of Lady Six Sky’s leader ability that gives additional combat strength to your units if they’re within 6 tiles of the capital. That means we can easily defend our territories or advance to any forward-settled cities while keeping the bonus.

Going on the offensive

If Archery’s close to getting researched, switch to Agoge and Urban Planning and quickly train Hul’che. Turn your Slingers into Hul’che as well: The combination of the Observatory and Hul’che should give you enough points to reach a Golden Age once you enter the Classical Era: Anyway, as for Qin Shi Huangdi, I simply declared a surprise war. Thanks to the capabilities of the Hul’che (stronger damage vs. wounded opponents), mopping up China’s early-game units was a breeze. The civ was eliminated during the Classical Era: But I did eventually build the Forbidden City wonder in Xi’an to commemorate those old battles: The Maya control the continent

There was another opposing civ on the same continent: England led by Eleanor of Aquitaine. She didn’t have any means of going to war with me due to having to go through several city-states and rough terrain. Instead, she spent most of her time denouncing me and making silly demands: While she was doing that, I just made sure to focus primarily on science by way of Observatories. Because of the synergy with farms and plantations, I was able to grow my cities quickly in a short period, all while staying ahead of the technological race.

The image below is my capital’s Observatory. It’s not much because we didn’t get the ideal placement, but it more than served its purpose while playing a Civilization VI: New Frontier Pass deity game as the Maya: Meanwhile, the grid below shows my Mechanized Infantry and Machine Gunners just waiting to pounce on Eleanor’s Musketmen and Pike & Shot units. You’ll notice how I couldn’t get the perfect double hexagonal city placement geometry due to other city-states and the southern coast: The Mayans led by Lady Six Sky are an extremely powerful pick for Civilization VI deity games. They have all the right tools, perfect for turtling defensively and playing “tall,” and they can be a top-tier civ if all the stars align. Unfortunately, they also tend to rely too much on getting the perfect location and you might restart a few times just to find a decent spot.

However, if the RNG gods bless you with a worthwhile start location — especially flat terrain with three or more adjacent plantation resources and farmlands — then the Mayan unique abilities in Civilization VI: New Frontier Pass go from “situational and complex” to “it’s time for a snowball science victory.” Heck, they’re practically good for domination as well thanks to staying ahead of the tech race. Civilization VI: New Frontier Pass is available on Steam. The Maya and Gran Colombia Pack, already included in the season pass, can also be purchased separately. For more information, check out our guides and features hub.

By Daniel Pinheiro51 mins ago
Guides

By Jack Salter5 hours ago
Guides

By Sam Robins7 hours ago
Guides