Civilization VI introduces its New Frontier Pass, a season pass that provides additional content every couple of months all the way to 2021. The first DLC offering is none other than the Maya and Gran Colombia Pack. Here’s our guides and features hub with everything you need to know.

Maya and Lady Six Sky introduction – Get to know the Mayans who are now led by Lady Six Sky, a powerful leader who has been depicted as a warrior queen.

Civilization VI: New Frontier Pass – Is it worth it? – The biggest question, however, is whether you should go ahead and purchase the season pass or hold off for a while.

Maya deity guide – Featuring multiple unique abilities that can make them a science-generating powerhouse, the Mayans could end up becoming a top-tier civ. Unfortunately, they’re also overly reliant on finding the best locations (the “perfect geometry” of sorts) for their cities, lest their expansion, and tile yields, get gimped to the ground.

Gran Colombia deity guide – Hacienda placements aside, Gran Colombia has the right tools — from additional movement to free Comandante Generals (Great Generals) — allowing them to steamroll the competition as soon as possible.

Byzantium deity guide – Basil II might’ve been born in the purple, but he makes your Civilization VI opponents bluer than blue and sadder than sad thanks to his uniques.

Gaul deity guide – Boost your production and lay waste to your foes as Ambiorix, the King in All Directions, and master of the Eburones.

Babylon deity guide – Hammurabi might’ve written an ancient code of laws, but he’s going to write his name on your forehead if he manages to beat you.

Vietnam deity guide – Lady Triệu has a turtle for an emblem, which means Vietnam’s a defensive-oriented civ for those who want to turtle their way to victory.

Portugal deity guide – João III wants it all, and he wants it “Nau.” Use Portugal’s trade routes and amass wealth for your eventual expansion.

Using Preserves effectively – The new district added as part of the Vietnam & Kublai Khan Pack is one of the most powerful tools you can use during your runs.

Note: Below, you’ll see the content roadmap for Civilization VI: New Frontier Pass. We’ll continue updating this hub as we learn more about future add-ons which will be released on a bimonthly basis. 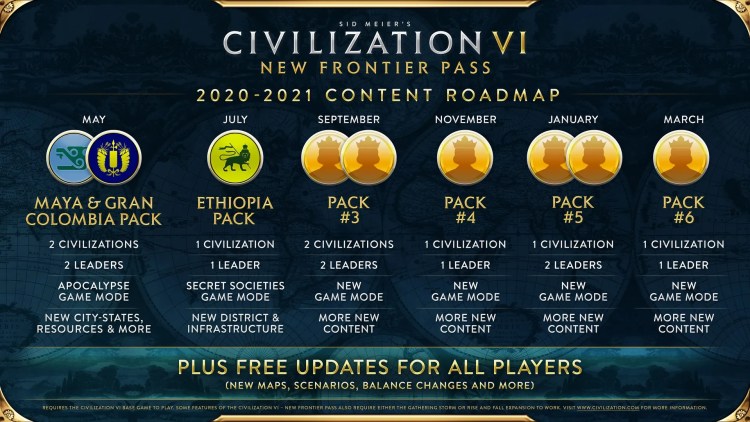 Civilization VI: New Frontier Pass is available on Steam. The Maya and Gran Colombia Pack, already included in the season pass, can also be purchased separately.

By Cameron Woolsey13 hours ago
Guides