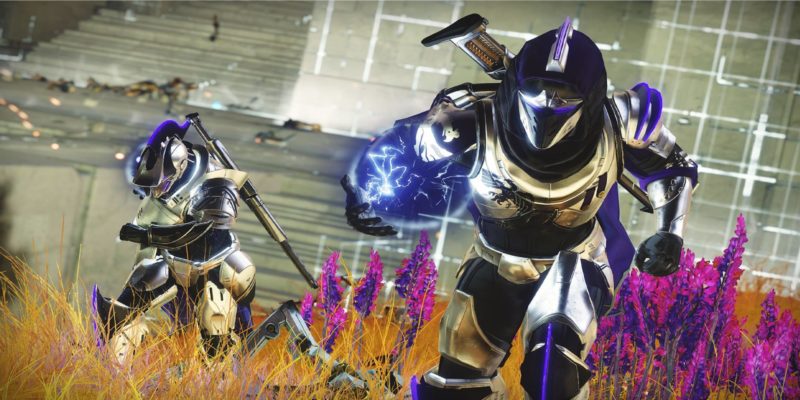 Destiny 2‘s Season of Dawn will be out in less than a week. It’ll feature several exotic quests and the Symmetry exotic scout rifle, multiple bosses via the Sundial activity, Obelisks appearing in various planetary locations, the Lantern of Osiris artifact with new mods, Saint-14’s return, and events such as the Dawning and Crimson Days. There’s a lot to take in, so let’s get to all of the Season of Dawn content drops one by one. Valus Ta’aurc. From what I can gather…

Destiny 2: Season of Dawn – The Sundial

The Sundial will be the main activity in Destiny 2‘s Season of Dawn. Based on gameplay videos and developer commentaries, it seems it’ll be akin to the Menagerie. You’ll enter matchmaking with up to six players, and you’ll get dropped on Mercury’s surface (note that the regular patrol zone finally lets you use a sparrow).

Osiris tells you that killing the Undying Mind has messed with the timeline, and now the Cabal are aiming to reverse their misfortunes. Because Osiris fumbles everything anyway, it’s up to you to stop them. (Surprised? It looks like we’ll be ignoring Eris’ wacky dealings with the Darkness for now.)

I’ve skipped ahead in the Destiny 2 – Season of Dawn reveal stream to the part that shows the Sundial activity specifically. There appear to be various shielded Cabal mobs and other cannon fodder roaming around. Killing them would slowly grant progress akin to the Menagerie, and it doesn’t seem that you can fail your objective.

You’ll also be teleported to different timelines. Bungie has noted that this can lead you into the unknown but, then again, we might simply end up in the past, present, or future versions of Mercury, areas we’ve seen while doing the Infinite Forest quests in Curse of Osiris.

The encounter in the Season of Dawn reveal stream involves killing the shielded ordnance-bearing Cabal so they drop orbs. These orbs are then used to blast the boss, drop its shield, and nuke it to oblivion. It’s unknown what each encounter rewards, but we do know that there are various “Timelost” weapons to obtain. Perhaps these, too, could have a similar mechanic to the ones from Curse of Osiris.

The Lantern of Osiris Artifact

Moving on, we’ve got the Lantern of Osiris artifact. This will function similar to Destiny 2‘s Eye of the Gate Lord in Season of the Undying.

Your Guardian’s power level boost from the artifact will be reset, and you’ll start from your base power level (likely 960 if you reached the current Destiny 2 cap). While you’re doing various activities, you earn more experience points that provide power boosts and artifact unlocks.

There are new mods in Season of Dawn, many of which are tied to the Lantern of Osiris artifact. A brand new mechanic is also in play and it has a lot to do with your Light Charges. Some mods add a “charge of light” when you do certain actions such as finishers or breaking an enemy’s shield with the corresponding element. In turn, you can also consume all charges of light to significantly increase your damage resistance. The more charges you consume, the longer this effect lasts.

What seems to be a cause for consternation is that your current armor pieces might not have the same functionality once Destiny 2‘s Season of Dawn rolls around. At least, that information wasn’t made clear during the stream. It’s already gotten a few players worried in Destiny‘s official subreddit. After all, if you spent a lot of effort looking for god-rolled armor pieces or masterworking the ones you liked, then not being able to use the Season of Dawn armor mods would seem like a tragic waste of time.

If you got attached to your old loadout from Destiny 2‘s Season of the Undying, then you might make a few changes. That’s because the Lantern of Osiris will also bring new weapon mods for other weapon types:

At a glance, it seems we’ll make use out of our scout rifles again. Hopefully, you’ve got your Randy’s Throwing Knife or, I don’t know, something else. I mean, nobody has used scout rifles for PvE since Nameless Midnight, right? Pulse rifles will also see some love so enjoy your Bygones, Blast Furnace, Redrix’s Broadsword, Inaugural Address, and any of those bad boys.

Now, going back to scout rifles, one of the recently revealed exotics in Destiny 2‘s Season of Dawn is the Symmetry. The Symmetry is an exotic scout rifle that’ll be introduced the same way as the Eriana’s Vow hand cannon. It’s immediately available for season pass owners, but non-owners will have to obtain it via regular seasonal rank-ups.

Destiny 2‘s Season of Dawn trailer already revealed Saint-14’s return. The long-dead Titan will finally get his vengeance thanks to your help. Osiris hints that he needs to restore the timeline to “save a friend,” and perhaps the Obelisk activity (which remains a mystery) might aid your quest.

If you do feel like becoming Saint-14 for a few moments, you can do so with one of the new finishers in Season of Dawn — The Kellbreaker (seen above). This slow and brutal headbutt will throw enemies around like it’s nobody’s business. Also, you can save up to nine finishers as a QOL improvement, letting them fire randomly when the action is used.

There are also other additions such as seasonal armor, ornaments, and the like.  The Dawning holiday event will make its yearly return, as will the Crimson Days event during Valentine’s. The aforementioned Obelisk activities, much like the seasonal events — will also be made available to all Destiny 2 players.

The four Sundial bosses will have a weekly rotation. Also, two exotic quests — the Devil’s Run and Bastion — have been announced so far. Unfortunately, both of these will be arriving early next year. It’s still unknown whether we’d see an additional exotic besides the Symmetry once Destiny 2‘s Season of Dawn goes live. As for the base power level, that’s been increased from 960 to 970. This should make hitting the Destiny 2 power level cap a breeze depending on the number of pinnacle rewards that are made available.

In any case, check out the calendar of content drops: 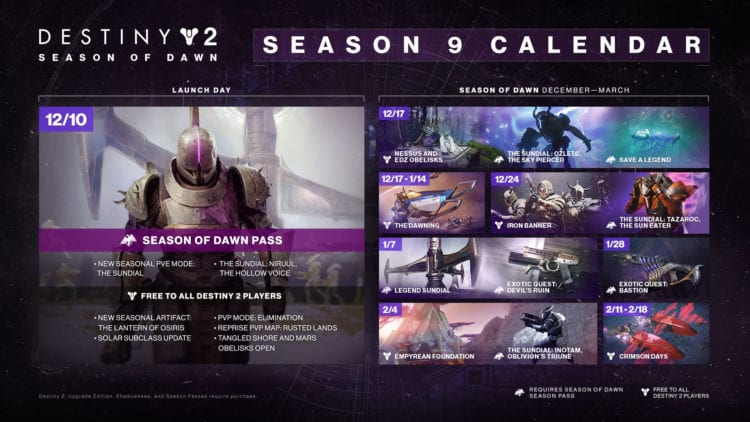 Finally, just so we’re clear: there’s no new raid in Destiny 2‘s Season of Dawn, at least not one that has been announced. The lack of content and the renewed grind might worry some players.

Likewise, it’s worth noting that bringing Osiris into the mix hasn’t led to anything positive for Destiny 2. It remains to be seen whether Season of Dawn will keep players excited or if it’ll be as poorly received as the last DLC that had Osiris’ name attached to it. If it’s the latter, then maybe he truly is cursed.

Destiny 2‘s Season of Dawn begins on December 10 at 10 AM PST, and it’ll end in March 2020. You can grab Destiny 2‘s free-to-play version, additional expansions, and the season pass via Steam.

Don’t forget, you still have some stuff to do, including time-gated content, for the current Season of the Undying. For more on these activities, check out our guides and features hub.