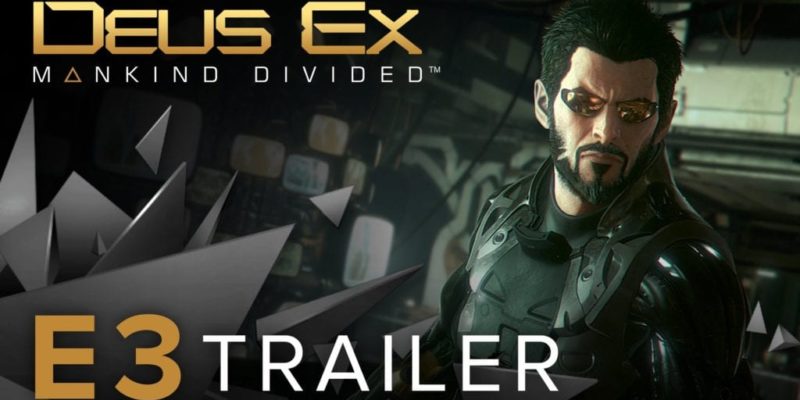 A gameplay trailer and some more details on Deus Ex: Mankind Divided mean that Square Enix have managed to show off something new at their E3 2015 conference.

Deus Ex: Mankind Divided is set in 2029, two years after the end of Human Revolution, and things haven’t gone well since then. Mechanically augmented people are feared and loathed outcasts, many of whom are branded as terrorists, and many of whom are forced to live in aug-only ghettos under heavy police surveillance in what Eidos Montreal are calling “a mechanical apartheid”

Adam Jensen is not one of these. He’s left Sarif Industries and is now working with a new Interpol division, Task Force 29, who investigate and stop terrorist attacks all over the world.

He’s not just doing this, though. Secretly, he’s also a double-agent; Jensen believes that the Illuminati have created Task Force 29 to further their own mysterious goals, so he’s teamed up with a bunch of “hacker activists” to bring them down.

In terms of gameplay, you can obviously expect new weapons and new augmentations. Jensen will be able to have a PEPS hidden in his arm, or use detachable nanoblades as projectiles. You’ll also be making lots of choices throughout which don’t just impact how the game is played, but will alter the course of the story and the eventual ending… which, I’m guessing, is so that we don’t wind up picking our ending from a list at the very close of the game.

It looks very Deus Ex. I’m not quite as impressed as I was with the early Human Revolution trailers, but it looks rather lovely nonetheless.

Deus Ex: Mankind Divided is due out in early 2016, and you can see a trailer full of gameplay footage below. A fair bit of it looks quite cutscene-y, but I’d wager it’s largely in-engine.