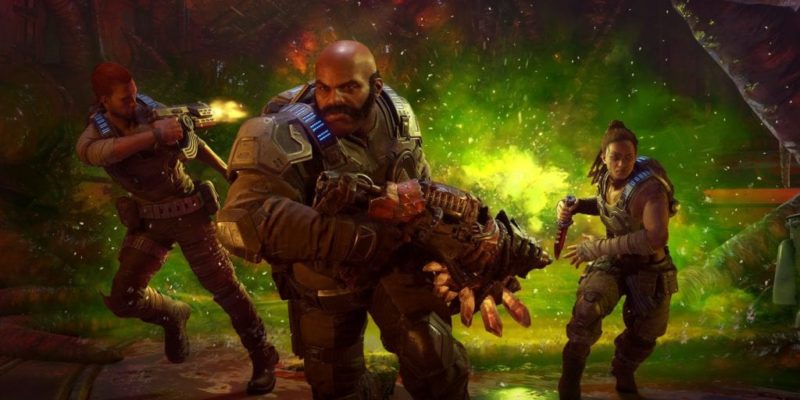 At the Gamescom presser this morning, Microsoft and developer The Coalition unveiled a ton of details for Gears 5. The most pertinent piece of information is that the shooter will be launching on Steam alongside the Windows Store when it releases on Sept. 10 (though the Steam store page has Sept. 9 listed). As well as that, we were given a look at the story mode, a look at the changes coming to Horde mode, and an announcement of a Halo: Reach crossover character pack.

Gears 5 is all geared up at Gamescom

First up is a story overview trailer. Taking a cue from Hollywood and using a bastardized version of a popular song, we’re greeted to a bunch of random cuts to people acting all mopey and getting mad at the Locust Horde. It honestly doesn’t detail much of anything for what Gears 5 will be about, apart from showing that Marcus and Cole will feature prominently in the campaign mode. I suppose that’s nice for long-time fans.

Next up is Horde mode and it seems The Coalition is aiming for the Overwatch crowd. At the start of each game, players will select which character they want and will be granted a specific “ultimate ability.” Kait Diaz will come equipped with a cloaking device, and JD Fenix will be able to call in airstrikes. Players will also be able to play as Jack, the friendly robot assistant that has appeared in basically every Gears game. Jack brings a totally different play style, allowing you to hack enemies and buff teammates.

Rounding out the news is the Halo: Reach crossover character pack. This is really simple as it, essentially, allows players the opportunity to play as two Noble Team members (Emile A-239 and Kat B-320) in Gears 5‘s different game modes. This is reminiscent of when Run the Jewels came to Gears of War 4 and is being done to promote the upcoming PC port for Halo: Reach. This character pack will be included with the “Ultimate Edition” of Gears 5. Subscribers to Xbox Game Pass Ultimate will also have access to these skins.