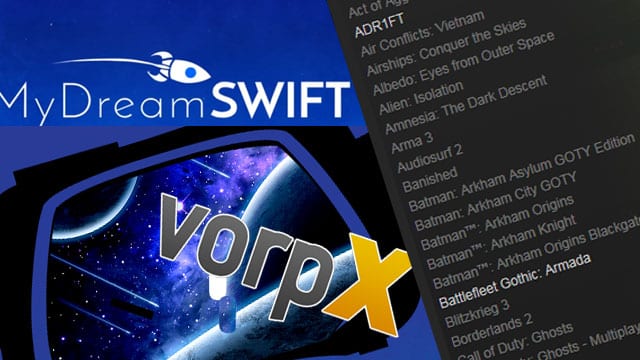 Oculus and HTC may have revealed all their launch titles but not all will be to everyone’s liking (see Vive and Oculus lists), and what about all those old games in your Steam Library?

A tool called Swift from MyDream could be the answer to opening up more titles to VR. The tool hooks into your Steam library and provides a couple of options on how it will be displayed in the headset. There’s a first person mode which will work well with shooters and a cinema mode which allows users to play a game with a big screen cinema effect inside the headset.

Once a user’s Steam library is imported into Swift, each game has its own profile which can be tweaked with options such as as sensitivity of head mapping, jump.crouch tracking and the FPS or cinema mode.

There is one drawback with Swift and it’s that it doesn’t feature stereoscopic rendering in order to keep a high performance of  90 fps at 1080p which reduces the overhead.

Like other tools such as VorpX, which we have used extensively to varying degrees of success, not everything will work perfectly or give the desired experience. With a limited number of games supporting VR at launch, it would be mad to ignore the game’s you already own.

There are other tricks too that are worth investigating such as the one for Alien Isolation which worked incredibly well. GTA 5 also worked well using VorpX and this setup (see our video).

Tools such Swift and VorpX could start to prove incredibly useful because most Steam users have a packed library of games, some of which may or may not work well in VR but they could be worth a shot. It’s worth pointing out that VorpX doesn’t currently support the Vive but there are plans to add support once the Vive units ship out.

Starting next week, Oculus systems will be arriving on doorsteps and anyone wanting to make use of all their games should try these out. It does mean extra cost but when you’ve already spent $599 on a Rift then a few extra dollars won’t matter.

The video below demonstrates how Swift works.

By Andrew Farrell6 hours ago
Tech

By Martynas Klimas7 hours ago
Guides