While we still have much to learn about 343 Industries’ highly-anticipated Halo Infinite, the developer has been releasing a slow, but steady stream of information about the game via its Inside Infinite blog series. The developers have covered a variety of topics, but the latest one confirmed some very important details about how ranked play will work as a cross-play title. Halo Infinite is going to feature input-based matchmaking, much like how it works in Halo: The Master Chief Collection. If the game proves to be a hit, this could be huge for the future of cross-platform play, as it will push more developers to rethink how they balance gameplay.

The widespread adoption of cross-play is still a relatively new concept in gaming. As little as four years ago, it was still largely just a dream for us PC players that wished to play with our console friends. A few titles had half measures that allowed for it, but the push for genuine cross-play didn’t begin until Fortnite came along. And we should be glad that Epic Games didn’t rest on its laurels after it took the gaming scene by storm. Major competitors like Call of Duty were forced to make it happen as well, and many barriers have reluctantly been knocked down since (looking at you, Sony).

It’s amazing to see how many developers have now implemented cross-play or have committed to doing so eventually. There are without a doubt many technical obstacles to overcome to make the feature work, but the benefit to the players is undeniable. Yet things are still far from perfect. While Epic Games helped a lot to bring cross-play to the masses, it also highlighted one of the key pitfalls of allowing the feature to exist between consoles and PC. Input choice plays a major role in how we play our games, and the differences between controller and mouse and keyboard (M/KB) are tremendous.

Developers design and balance their games around very specific parameters to make the gameplay experience feel good. Oftentimes, developers even struggle to port their games to and from the PC platform after initially designing the game with a single mode of play in mind. That was something 343 Industries clearly ran into while working to bring the classic Halo games to PC. Games essentially need to be developed from the ground up to facilitate multiple inputs properly. Throw in cross-play multiplayer though, and the task of achieving equilibrium becomes all the more difficult. 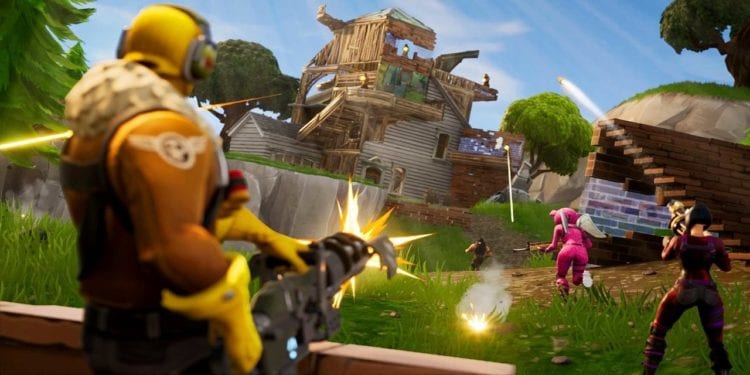 Fortnite is still one of the most obvious offenders of unbalanced cross-play, due to the massive differences when playing the game on controller versus M/KB. It’s just a fact that building is way easier on mouse and keyboard. And seeing how the building mechanic is the meta when it comes to competitive play, controller players just don’t stand a chance aside from a few standout players. The main problem with this in Fortnite, however, is Epic Games’ implementation of cross-play matchmaking. Once cross-play is enabled, players from every platform are thrown into the same lobby. That means someone on a clunky, low-framerate Nintendo Switch could find themselves up against a PC player getting 240 fps with a high-end M/KB comp setup. See a problem here?

The same concept of lumping everyone together for cross-play, regardless of input, goes for Apex Legends. However, the differences between inputs arguably aren’t as unfair until you get to higher levels of skilled play. Even then, there are pro controller players like TSM Snip3down (an ex-pro Halo player) who dominate. What’s ridiculous though, is Respawn’s position on cross-play input “fairness.”

In Apex Legends, cross-play lobbies are basically just PC lobbies with console players jumping in by default. However, console players have the option to opt out of going up against PC players. Instead, they can choose to play strictly against other console players, which is a cross-platform approach of sorts. As the game director of Apex Legends, Chad Greenier, puts it: “We want to ensure that keyboard and mouse PC players are not being matched against console players, for reasons that should be obvious.” But what about the PC players that play on controller? They are stuck dealing with M/KB players. One would think that such an oversight would be equally “obvious” to someone like Chad Greenier.

Then there’s the argument of controllers being buffed by aim assist and other advantages. It’s also a fair argument presented by M/KB players, as nobody wants to feel at a technical disadvantage when playing a game. Epic Games dealt with this in Fortnite by nerfing ADS aim assist to the point that it’s almost gone to make M/KB players stop complaining. I tested the “L2 spam” controller aim assist exploit and have to agree it felt like an aimbot though. Still, removing one of the few controller advantages is far from a solution when it simply skews the M/KB input advantage further.

Respawn has taken a similar approach of reducing controller aim assist in Apex Legends. That game is a strange case though, as certain inputs seem to favor specific weapons over others. For instance, automatic weapons like the R-99 have way less recoil when used with a mouse versus a controller thumbstick. Conversely, the Hemlok is easier to use with a controller. These are just two of many examples in which the developers attempt to balance inputs. 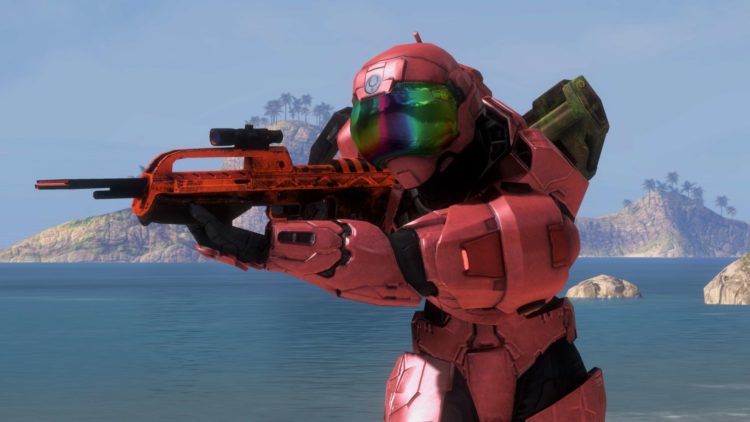 The Halo way to cross-play

Unlike the classic games in the franchise, Halo Infinite has been built from the ground up with PC and console platforms in mind. 343 Industries also recently confirmed cross-play and full cross-progression. So that’s all fine and dandy. Many PC players are undoubtedly looking forward to sharing the experience with friends on console, but one thing that seems to have flown under the radar in recent news is 343’s decision to implement input-based matchmaking for ranked play. This is huge news for a game so hotly anticipated, as it will solve this ongoing issue of input variance while also avoiding platform restrictions.

Unlike other developers that continue to struggle with balancing inputs, 343 figured this out pretty quickly after launching Halo: The Master Chief Collection on PC. Although, the revelation didn’t come without some help from the community. When the collection first launched in November of 2019, M/KB players jumped into Halo Reach’s multiplayer for the first time only to be met with fierce competition from grizzled controller veterans. Things went pretty badly to say the least, and it was clear that not all of the weapons handled equally across inputs like is the case in Apex Legends. 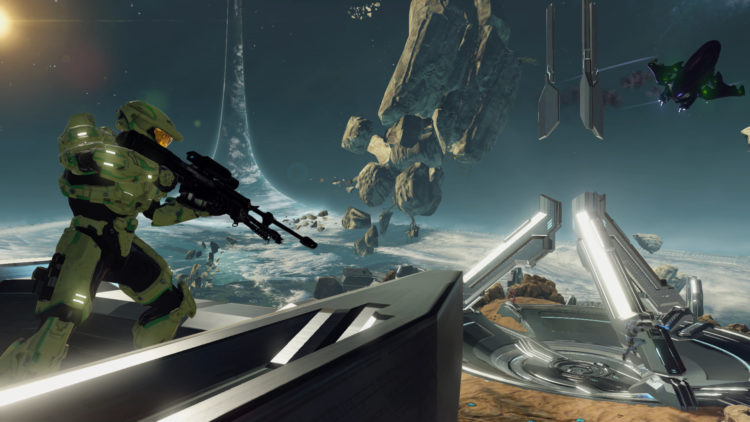 One of the more vocal critics was none other than Summit1G, a hugely popular Twitch streamer, and also the #1 Halo streamer at that time by far. Summit was initially excited to play the game, and even competed in several online competitive events. The input variances degraded his enthusiasm for the game though over a number of weeks before he finally quit playing altogether and denounced the game as a bad port. While 343 Industries took additional steps to improve M/KB support for Reach and other Halo titles, the developer clearly took the lesson to heart and eventually announced input-based matchmaking for Halo: The Master Chief Collection along with cross-play.

Since then, the results have been night and day. Matchmaking with an input preference will link you up with those of the same preference when the population pool allows for it. I see a mix of inputs still from time to time (the pre-game lobby shows you other players’ inputs), but that may be due to my preference for social play over ranked where more strict conditions apply. Importantly, I find certain playlists like Team Snipers (where M/KB excels) far more enjoyable on controller now that other players don’t have a clear advantage over me. How input-based matchmaking can work on PC

While the development side of input-based matchmaking is without a doubt complex, the way to go about it seems pretty straightforward from the user end. 343 Industries handles it in Halo: The Master Chief Collection by blocking whatever the non-preferred input is during matches. For controller players, it means the keybinds don’t work during gameplay to ensure players can’t just switch over mid-game. Pressing start and then going into the menu restores M/KB control though. Your mouse and keyboard will also work normally once you leave the match. And it’s as simple as that.

It’s hard to say why other developers haven’t adopted this method yet, as it clearly works in Halo. Jason McCord, the design director of Apex Legends, is under the impression that players can switch inputs in-game at any time. He could possibly be referring to some form of game-breaking exploits in which players could cheat the input system, but the successful implementation of input-based matchmaking in Halo: The Master Chief Collection suggests McCord’s assumption is not true.

Won't do input based because you can switch from controller to M&KB at any time.
Ranked and crossplay will work how you'd expect. Should just get better matchmaking times.

As for Epic Games, the development team implemented input-based matchmaking back in 2018 to place M/KB console players in PC lobbies, but never addressed the converse. It could be argued that PC controller players with high-end PCs could have a performance advantage, but then it suggests Epic is okay with punishing M/KB console players. Either way, it doesn’t make any sense and Epic has never provided a clear reason as to why it cannot let PC controller players compete against console players via input-based matchmaking.

As for Respawn Entertainment, it does not support M/KB on console, so this issue does not exist (aside from those who use workaround devices). Console players are only moved into PC lobbies if they enable full cross-play or choose to play with a PC player on their squad.

Halo Infinite is set to follow the same approach to input-based matchmaking as Halo: The Master Chief Collection. Considering the blockbuster potential for this game, it’s a huge opportunity to bring attention to the problems which currently exist with cross-play. Input-based matchmaking is certainly not a fix-all solution for balancing matchmaking, but allowing players to select an input-pairing preference for the other players in their lobbies could do a lot to improve the overall player experience.

Call of Duty is one such game that factors input into the matchmaking algorithm. While it largely uses skill-based matchmaking to curate the player experience, it does seem that Activision is on the right track in terms of recognizing the differences between inputs.

Overall, it seems like cross-play is largely used to speed up matchmaking times, but it also calls into question whether or not that is the best thing for players. Some would certainly be willing wait a little longer for a match that’s on a more level playing field than facing unfair odds. Even if input-based matchmaking was just a preference option for players, it would likely do some good for easing player concerns.

343 Industries’ approach to input-based matchmaking will be something to keep an eye on going forward. Halo Infinite could end up being one of the best examples of how controller and M/KB players can share lobbies when needed, while playing separately for things like ranked play to ensure balance.