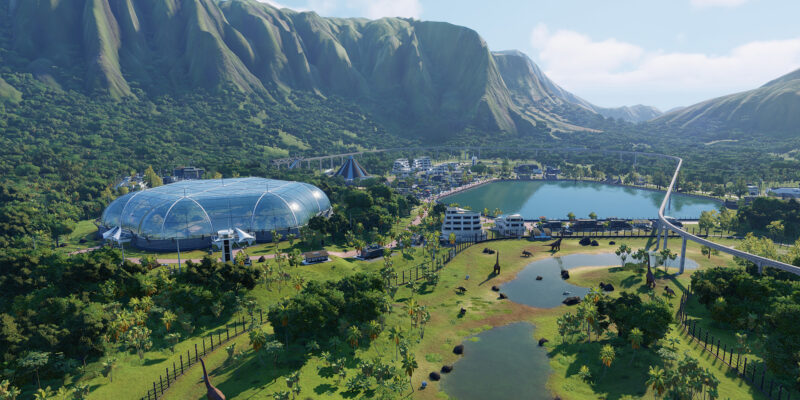 Jurassic World Evolution 2 is the sequel to the management sim game where you construct a theme park and hatch new dinosaurs that serve as attractions. Although it was released on November 9, we, unfortunately, received a code fairly late. As such, I primarily focused on writing guides for the game, as opposed to rushing through the campaign and other modes to quickly churn out a review.

To be fair, it’s true that Jurassic World Evolution 2 has several ideas and concepts that aim to improve upon the original. However, it’s also brought down by mind-boggling bugs, tedious progression, incessant micromanagement, and one of the most limited sandbox modes around.

The campaign in Jurassic World Evolution 2 is mostly akin to a primer that’s related to events in the films. Characters such as Claire Dearing, Owen Grady, Dr. Ian Malcolm, and Dr. Henry Wu are introduced as you complete objectives. These range from capturing wild dinosaurs, creating habitats, and repairing bases. In a way, the campaign is more like a tutorial, with other modes acting as the meat and potatoes.

Sadly, the campaign did have one particularly notorious bug that occurred during the second mission. It prevented me from progressing after capturing an Allosaurus since the game isn’t aware that the animal is already enclosed. That took me a few retries — and a couple of hours wasted — just to figure out what went wrong. That’s because the first mission advised me to build enclosures in preparation for dinosaurs that are being transported. Coincidentally, the Allosaurus bug occurred if you did just that. 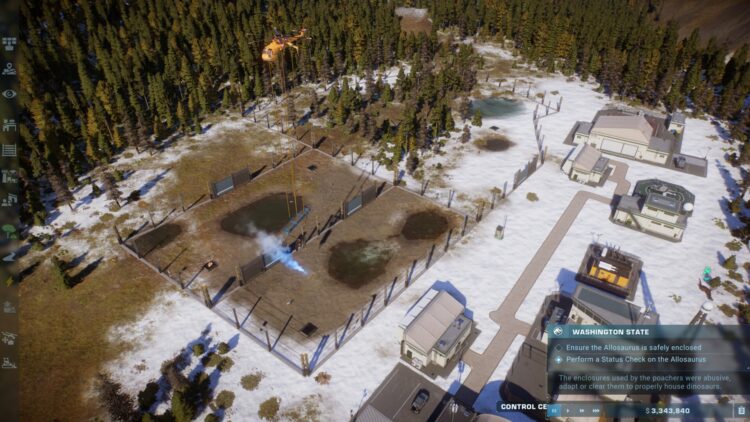 As mentioned earlier, Jurassic World Evolution 2 is all about creating a theme park and populating it with dinosaurs. The building and construction mechanics themselves are superb. There are various facilities that have unique functions, utilities to power them, attractions that generate cash, and amenities that improve the well-being of guests.

The second part, creating dinosaurs, shows a lot of promise too. Your initial objective is to recruit a team of scientists. They’ll conduct expeditions that let you acquire fossils, as well as research technologies that unlock new facilities or boosts. The fossils are then studied so you can fully map a creature’s genome. Once that’s done, you’ll be able to incubate eggs via the hatchery. After time passes, you may release dinosaurs in their pens and, in turn, they’ll attract more tourists to your establishment. 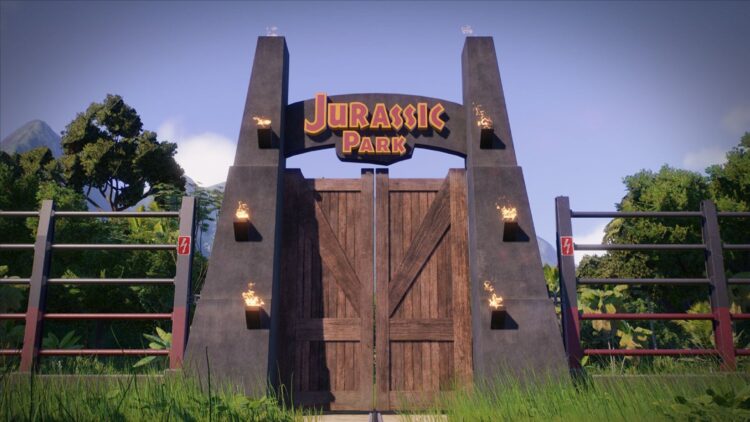 Those are the basics, but things do tend to get more complicated from there. For instance, the genetic traits of these creatures (determined when you clone eggs) can make them friendlier, stronger, or more content. Conversely, they could also end up becoming more aggressive, intolerant, or downright vicious.

Social co-habitation aspects also come into play as each animal has its own likes and dislikes. Not only do you have to satisfy its environmental and dietary needs, but also determine the types of dinos it can co-exist with in the same territory. If certain species don’t get along, then they’d become more unruly and hostile. Eventually, they could break out of their pens and attack your guests, leading to unwanted rating penalties. 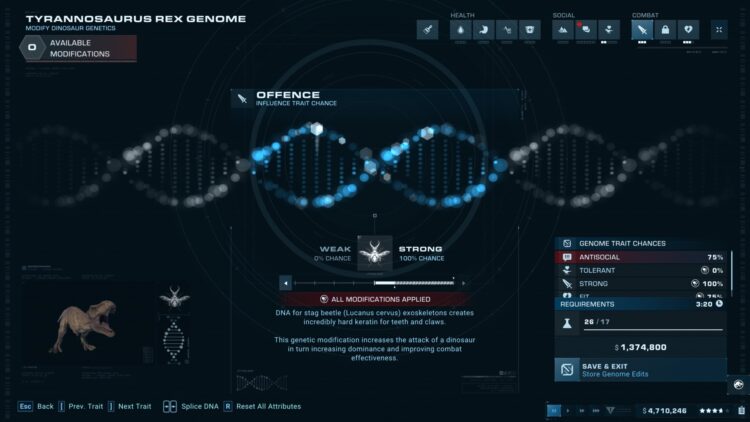 I had also opted to try out Jurassic World Evolution 2‘s Sandbox Mode (I’m a huge fan of sandbox mechanics in the management sims and city builders that I play). Surprisingly, what this game has was perhaps one of the most limited modes I have ever encountered. By default, sandbox mode doesn’t have expeditions or research. The only dinosaurs and buildings that are available are those that have been unlocked in other game modes. This means you’re required to complete multiple missions and spend countless hours just to obtain something you might need.

It’s primarily why I advised players to just choose the first Challenge Mode map to unlock most features. Focusing on this map is fine if you want to obtain deadly beasts like the Tyrannosaurus Rex, Spinosaurus, and Mosasaurus. Still, there are a select few such as the Compsognathus, Indominus Rex, and Indoraptor that require specific modes or missions.

Granted, we can see similarities in how the system worked in the first game. But, the difference there was that Sandbox Mode was added over a year after the game launched. In contrast, the sequel has Sandbox Mode available from the get-go, making these restrictions extremely glaring.

It’d be better if the other game modes presented various rewards, with Sandbox Mode existing for players who simply wish to relax and create a theme park that has everything they could ever need. Instead, Frontier Developments opted to retread the same unlock mechanics. If you’ve already gone through the whole endeavor in the original game, redoing the whole process for the sequel feels like an unnecessary waste of time. Worse, outside of a few exceptions, mission tasks tend to become very repetitive and tedious. 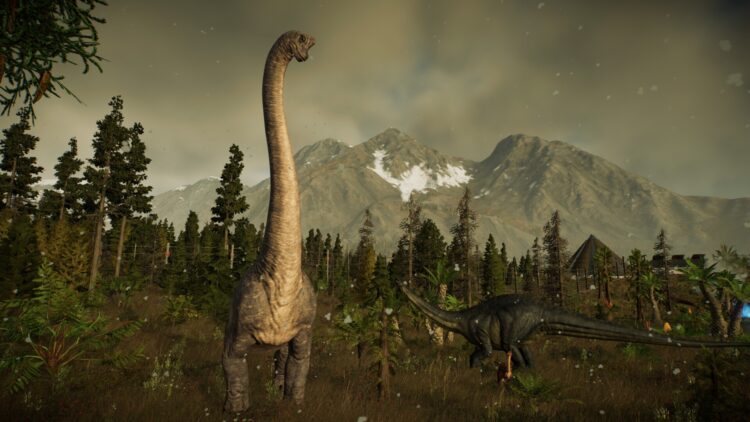 Other issues in Jurassic World Evolution 2

There were a few other issues in Jurassic World Evolution 2 that soured the experience. Chief among these is the mind-numbing micromanagement that you had to deal with if dinosaurs get sick or injured. For reference, there are two buildings that you’ll want to take note of — the Ranger Station and Paleo-Medical Facility. The former has units that can scan and tranquilize your rampaging reptiles, and their actions can be automated within a particular radius. The latter, meanwhile, requires you to manually do those tasks. If six dinosaurs have an unknown ailment, you need to scan them one by one with your medics. If there’s a way to heal them as is, you’ll need to redo that action even if you’ve researched a treatment (scanning and healing don’t always occur in sequence).

For automated actions within a radius, that, too, can become annoying. There are times when your dinosaurs get bugged. They simply won’t move and are stuck in the same location. If you don’t notice this, they’ll eventually starve to death. In my case, I would realize that this bug occurred only when my rangers and medics seem to have gotten stuck as well. They were trying to repeat the same action to the creature and, because its programming glitched out, the ranger and medic vans just kept at it for prolonged periods. There were other problems as well, such as devastating storms that kept occurring (leading to massive drops in income and park rating), flying dinosaurs becoming unresponsive in the aviary, and dinosaurs attacking creatures that they’re supposed to like (even though they don’t have negative traits).

Jurassic World Evolution 2 can fill you with a sense of awe at times. The visuals of gargantuan ancient beasts remain breathtaking to behold. Likewise, Chaos Theory Mode, which gives you a glimpse into “what if?” scenarios from the films, is quite interesting. Unfortunately, it’s also marred by problematic bugs and questionable design. It’s not something I could recommend at its current state. 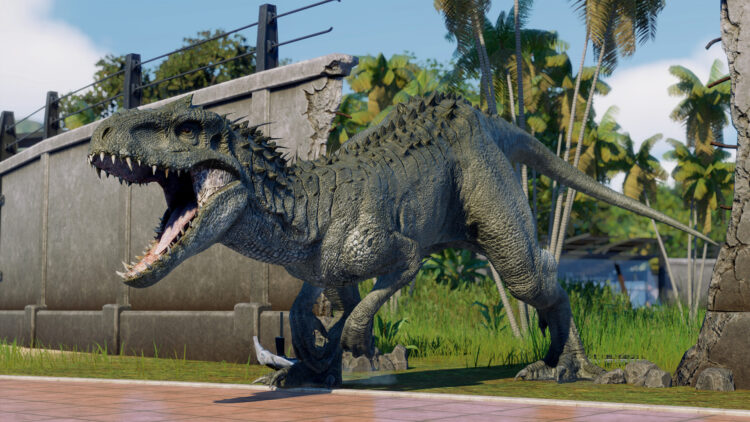 Battlefield 2042: How to disable crossplay