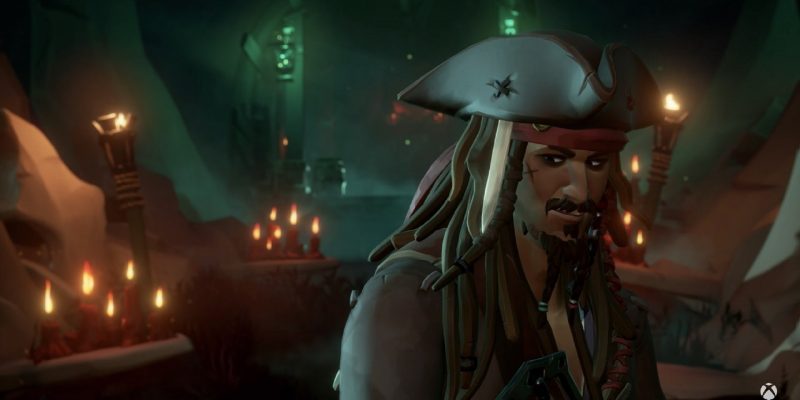 Sea of Thieves has allowed you to take on the role of a pirate and explore the seas either on your own, or with your crew. Since it was launched, the developers have rolled out updates with special events, a bunch of rewards, and more. Now, fans can prepare to take to take their pirate adventures to the next level. This will be done alongside a familiar face, who is none other than Captain Jack Sparrow. Yes, Sea of Thieves is getting a crossover with Pirates of the Caribbean in Sea of Thieves: A Pirate’s Life.

The crossover was revealed at the Xbox and Bethesda’s showcase. It feels almost fitting for Jack Sparrow to be joining the Sea of Thieves crew. The crossover will open up a new and exciting story for you to get stuck into. Captain Jack Sparrow stole some treasure, leading to a darkness following him to Sea of Thieves. Moreover, the octopus-faced Pirates of the Caribbean villain, Davy Jones, will be on his tail.

As you can see in the trailer, Captain Sparrow’s cartoony character closely resembles his character from the movies. Also, there is no doubt that we will see his witty personality come through. In addition to some angry new pirates like Davy Jones, the Sea of Thieves: A Pirate’s Life update will introduce new enemies such as crab men, along with new environments.

Get ready for the Sea of Thieves: A Pirate’s Life update

The Sea of Thieves: A Pirate’s Life update will be available to play for free on June 22. The update will definitely captivate players who are interested in the story aspect of the game. Sea of Thieves is currently available on Xbox Game Pass. Now might be a good time to dive into the game if you’re a fan of the high seas and Disney’s swashbuckling franchise.