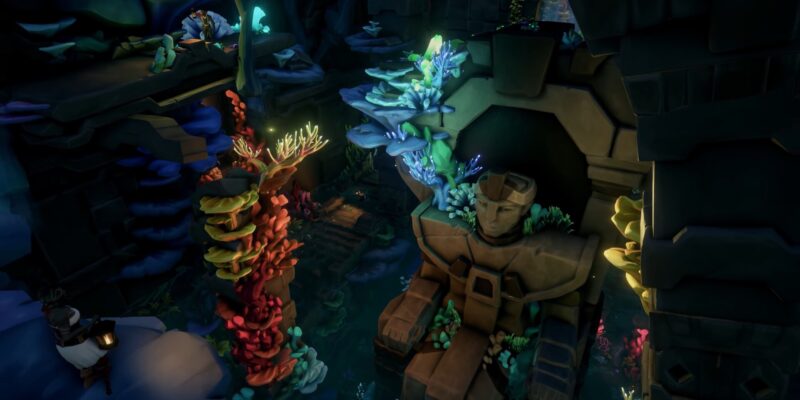 Get ready to make sail once again, lads, as Sea of Thieves is setting forth onto new waters. Almost as if the previous crossover season was a taste of things to come, Rare’s online swashbuckling game is going back undah dah sea. Sea of Thieves Season Four returns you to the Sunken Kingdom, where Sirens guard their waterlogged treasure, while also including loads of seasonal rewards.

Those who played the recent Pirates of the Caribbean crossover likely won’t be surprised to see what’s on offer. Once more, you dive deep below the titular Sea of Thieves to do battle with Sirens and seek out precious loot. Many of the labyrinthine caverns, called Siren Shrines, will have puzzles to solve, crab monsters to fight, and the ever-present danger of drowning. These caverns are revealed via swirling purple light rising off the ocean’s surface.

The trailer showcasing the new season gives you a good idea of how it will all go down. Of course, the big question when it comes to looting under the water: how do you return with treasure? Well, that’s a good question. After all, it’s a long trip from the bottom back to the surface. To streamline things, once you reach a treasure room, you can use a Merfolk statue nearby to store up to 20 chests. Once that’s done, you can reclaim your booty at the water’s surface. Afterwards, you simply need to use the statue to return to your ship.

More than what’s below the waves

Of course, beyond treasure, Sea of Thieves Season Four comes with 100 progression levels with fresh rewards. You can glimpse some of them in the trailer above. I hope you like the color purple, because damn. Well, I suppose they’re better than some things. The new season comes with skins for your ship and equipment, as well as weapons and outfits. Earning Commendations will grant you some of these skins, as well as flags, gold, Ancient Coins, and more. There are also new ship collections to purchase in the Pirate Emporium, such as the Golden Nile Ship Collection and Golden Nile weapons and costumes. There’s also, of course, the Plunder Pass, which gives you a weird Halloween-inspired gear. I suppose it is autumn now.

There’s plenty more in store. The rest of what you’ll get in Sea of Thieves Season Four, from the loot to the rewards, can be found at the game’s site.