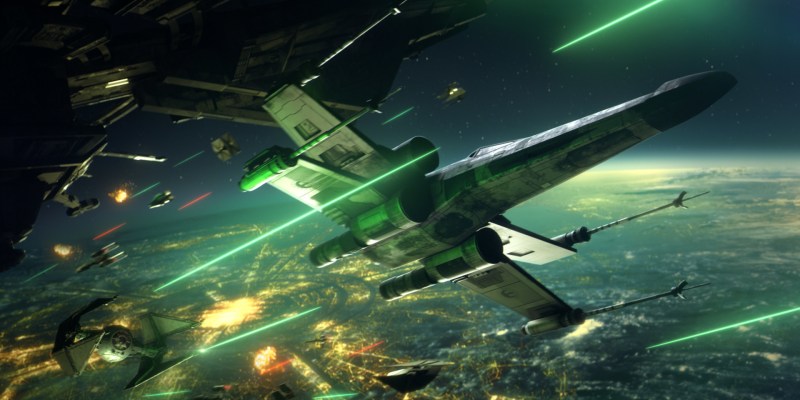 Star Wars has more variance in quality than almost any other franchise around. Fans have long sought refuge from the mediocre follow-ups to the original trilogy through its largely impressive video game catalog. Among the entries in these hallowed halls was the X-Wing series that began in the early ’90s. Star Wars: Squadrons hopes to capitalize on that nostalgia, but how does it hold up under review?

Undeniably, Star Wars has experienced a rough time under publisher Electronic Arts. Battlefront 2 had such a rocky launch, mired by pay to win mechanics, that even governments started to get involved . EA’s last Star Wars game was met with a mixed reception, and multiple related projects have been canceled since EA took over the license. To say that EA’s back was up against the wall going into this release is a bit of an understatement. The fact makes it all the more impressive that the developer managed to pull out a tightly-focused experience that is sure to please even the fussiest of Star Wars fans.

Star Wars: Squadrons is, at its core, a flight sim, but don’t let that scare you off. You won’t be flipping switches to turn on your engine or making sure your fuel mixture is correct. After all, Star Wars is a fantasy series at heart, and Squadrons implements just enough control in your cockpit to make you feel strategically involved without being overwhelmed. Every system you need to be aware of is laid out on your screen in an easy-to-read way. You have your throttle control, radar, special equipment counters, targeting system, shield and health readout, and a display showing how your power is currently divided. 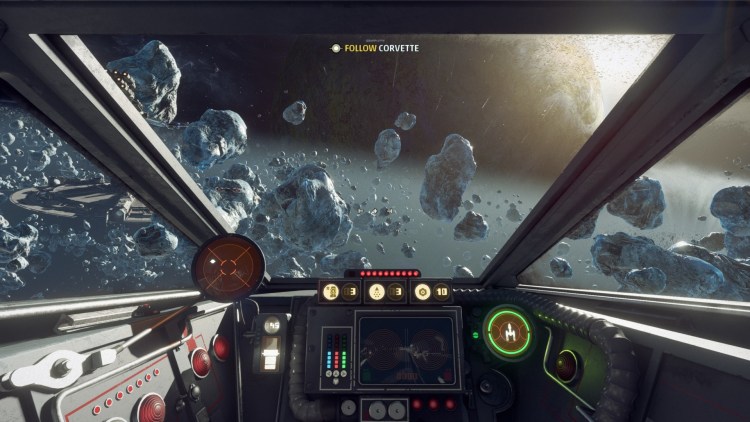 Systems are all handily laid out on your dashboard.

Power can be diverted between engines, weapons, or shields. It can also be evenly balanced between the three. This is all or nothing with tradeoffs for each. For example, diverting power to the engines gives you access to a boost function which can help you get out of trouble quickly. Sending power to your weapons lets you fire more before overheating. Shields are largely exclusive to the New Republic for some reason though. I guess the Empire decided that putting shields on Tie Fighters was a waste of time (which makes sense given their propensity for exploding). All the controls for handling your starfighter are easy to learn and very satisfying once you’ve got a handle on them. After a couple of missions, you’ll be feeling like you’ve been blasting Womp rats in your T-16 all your life.

Your time in the campaign will be split between the Empire and the New Republic. Over the course of 14 story missions, you’ll be able to test out each of the four starfighter classes. Each side has an all-rounder (X-Wing and Tie Fighter), a bomber (Y-Wing and Tie Bomber), a fighter (A-Wing and Tie Interceptor), and a support ship (U-Wing and Tie Reaper).

The story itself is largely forgettable but serviceable. I won’t get into any specifics, but none of the plot elements had me on the edge of my seat. There is a supporting cast of pilots in each side’s camp, but none stood out enough to be memorable. That said, the story clearly wasn’t the focus here. After all, it’s the third option on the home screen. What people are really here for is the multiplayer.

Multiplayer is divided into two modes: Dogfight and Fleet Battles. Dogfight is a five-on-five deathmatch where the first team to 30 kills is the victor. It’s very straightforward, but damn if it’s not fun. Fleet Battles is a little more tedious. In this mode, you’ll have to work with a team of five either against AI or, if you’re feeling daring, against five human players in a ranked battle. There is a lot more going on here, but your ultimate goal is to take down an enemy capital ship.

Fleet Battles is a mode that takes a lot of coordination between you and your teammates. Picking the right mix of equipment and ships is crucial for getting a leg up on your opponents. I won’t say the mode isn’t thrilling at times, but it lacks the immediate satisfaction that Dogfight offers. 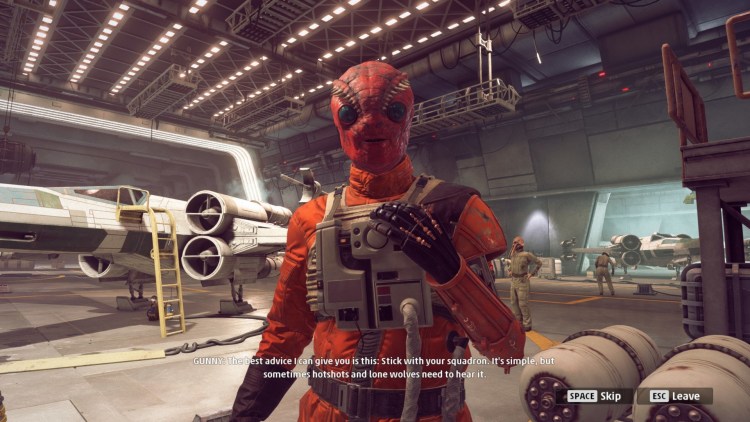 Teamwork makes the rebels cower under the mighty fist of the Empire.

The community seems to be fairly friendly and welcoming as well. Most of the teammates I had in my multiplayer experience were at best extremely communicative and helpful, and at worst silent. Everyone just seems stoked to be flying these iconic ships. I had one strange experience where I was teamed up with four Australians, which makes me think that there aren’t any dedicated regional servers, but I also didn’t have any issues once I got into a match.

Matchmaking on the other hand is fairly janky. It’s hard to tell if you’ve successfully connected to a lobby or if your search failed. There are several beats after entering a queue where you’ll seemingly just be dumped back to the menu before either entering a match or failing to connect.

Wait, I’ve seen this one!

In both modes, you’ll be able to outfit your ship of choice with different primary weapons, shields, hulls, engines, and auxiliary equipment. Each comes with their own tradeoffs to suit your playstyle. Whether you want to build an impenetrable, slow-moving tank, or a nimble glass cannon, there are options for you. However, everything other than the base ships needs to be unlocked.

There are two currencies in Star Wars: Squadrons. Requisition is used to unlock different pieces of equipment, while Glory is used to purchase cosmetics. While both are earned by leveling up, Requisition flows much more freely. You get two Requisition and 200 Glory per level with bonus gains at milestones. Glory can additionally be gained by completing challenges and placing in ranked mode. 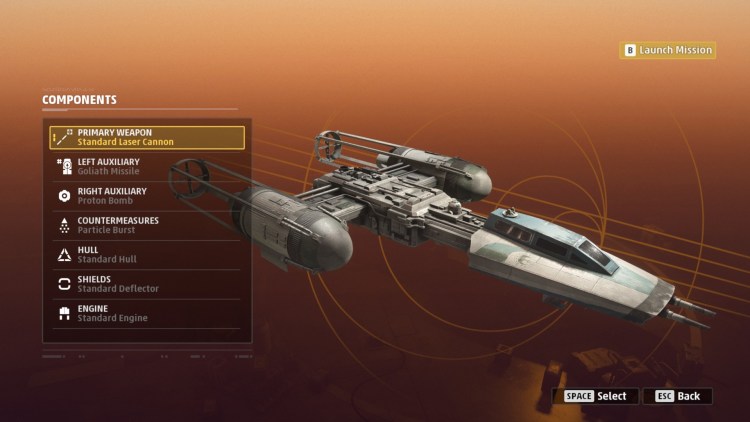 Parts can be swapped to suit different playstyles

While it only takes a single Requisition point to unlock a ship part, cosmetics are far more pricy. On average you should expect to spend 800-1200 Glory for most prominent cosmetics. In fact, the only way to play as an alien in Squadrons is to buy one of the four races on offer for 1200 Glory. I know cosmetic pricing doesn’t exactly make or break the quality of a game, but we’ve all seen EA dip its greedy fingers into the microtransaction market too many times to not see this as a source for future monetization. The acquisition rate for Glory is just too slow to think otherwise, and unlocks are faction specific. You’ll have to really think about how you want your character to look.

One with the Force

Shitty potential monetization ploys aside, Star Wars: Squadrons is a delight. It is visually impressive where it counts. Each starfighter is lovingly rendered and the skyboxes that comprise each map are beautiful. Both are all the more impressive in VR where you can really get a look at them.

That said, you can easily see all the places where corners had to be cut. Hangar sections, which precede each mission, while detailed, are strangely blurry while panning your camera about. Conversations with crewmates are ended with awkward cuts to black as whoever you are speaking to exits frame only to fade back to them just walking away. I’m guessing this was to cover for the fact that the developer didn’t get to make any animations for moving about the ship. Additionally, while the faces of characters in the game are mostly solid, during briefings, everyone turns into a dead-eyed mannequin. 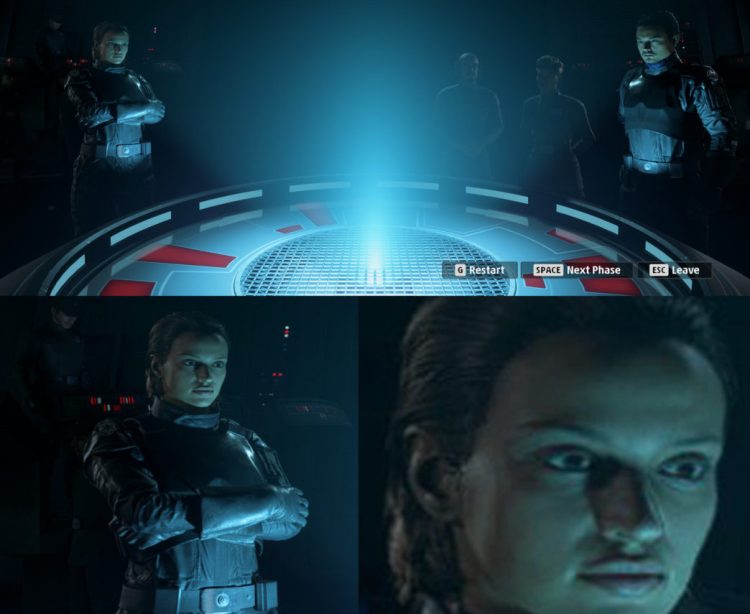 “I have stared into the void and it stared back.”

In a couple of instances, my ship became trapped by nearby geometry. The physics engine tried desperately to correct itself causing massive damage to my ship as it bounced off the walls repeatedly. This only happened three times over the course of the eight or so hours it took to complete the campaign, so it wasn’t the end of the world, but it happened nonetheless.

Overall, Star Wars: Squadrons should delight even the most jaded among the community. Doing a bombing run in a Y-Wing is among the best experiences I’ve ever had in VR. The game has a little bit of everything for everyone, and it should especially be embraced by those who still remember fighting among the stars more than two decades ago.

Star Wars: Squadrons manages to hit the sweet spot of being a tightly focused, casual flight sim at a budget-friendly price.