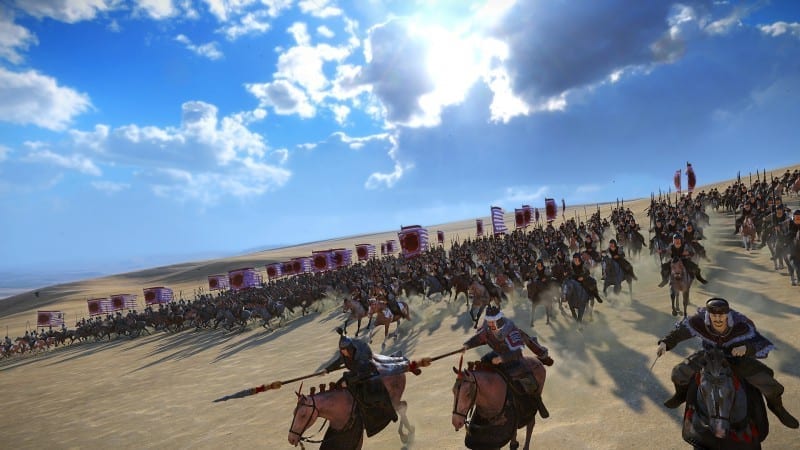 If you’ve seen some of our History Nerd pieces, then you’ll know that I’ve fallen in love with history. In fact, one of the greatest joys I have as a gamer is seeing these historical events depicted in this entertainment medium. Seeing other gamers and fans who appreciate the same stories or events as I do is also a treat. That brings us to Total War: Three Kingdoms, the latest in Creative Assembly’s strategy/war game franchise.

This story also starts on a somber note. A few days ago, we reported on Reddit user TheMissingLink5, whose brother, Robbie, was battling leukemia. His brother’s last wish? To be able to play Total War: Three Kingdoms. The Total War community, especially its subreddit, banded together in an outpouring of support. Creative Assembly was kind enough to provide the brothers with earlier access for the game.

I had gotten in touch with TheMissingLink5 that day. From one Three Kingdoms fan to another, I told him that the first guide I’d write would be for his brother’s favorite faction leader: Ma Teng.

Sadly, his brother is no longer around to see this, having passed away last night. This guide is dedicated to Robbie and his family. 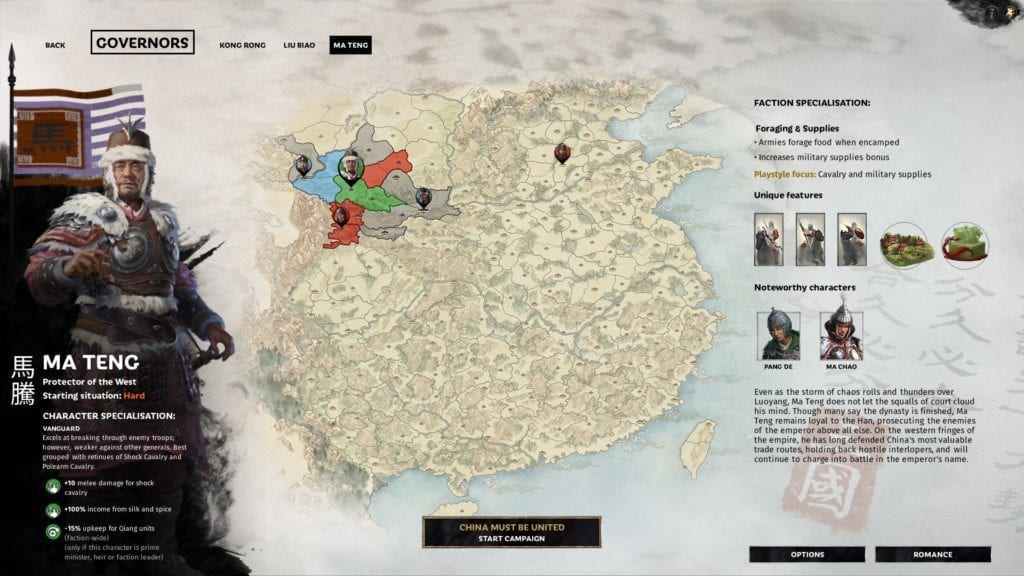 Ma Teng’s selection screen. Please note that this guide is based on Romance Mode.

Ma Teng: Protector Of The West

As you can see above, Ma Teng’s specialty would be his cavalry forces. You can field Qiang Hunters, Marauders, and more. (The Qiang were a tribe of nomads in Western China who were loyal to the Ma clan.)

You’ll also be able to enter a foraging stance instead of an encamp stance. This will allow your armies to gain extra food while replenishing troops in your territory. You also have a unique building chain, the “Xiliang Supply Lines.” This increases food from foraging, public order, and military supply. What’s not to like? 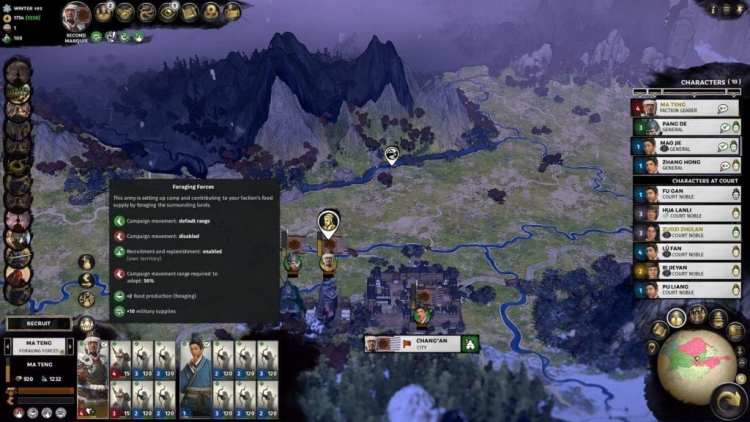 Use the foraging stance to gain extra food. This works for each army you have, even retinues that have been split up, to maximize your gains.

For your first turn in this Total War: Three Kingdoms campaign, you’ll end up having to take out a Yellow Turban army and a nearby settlement. This next part is important: Once you capture that settlement, do not stay inside. Right-click to keep your army outside of that settlement.

Why? That’s because you’re also at war with Gong Du, a Yellow Turban faction leader, and his army is right beside it. He will besiege that settlement if you stay inside, but he happily walks away if you remain outside. What a weird fella.

You’ll also be able to recruit a new general/retinue or a separate army in the next turn, but try to check your court first. There might be a strategist-type general (blue/water) that can be recruited. They have perks to increase your revenue from commerce, silk, or spices — and you’ll have loads of these since Ma Teng’s situated right next to the Silk Road. 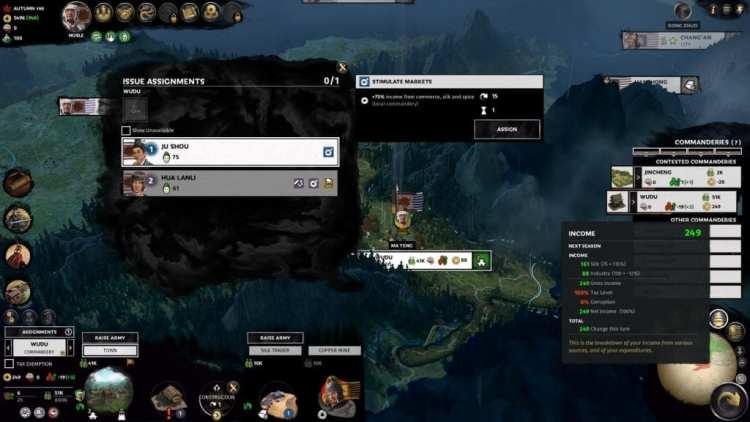 Recruit the first strategist you see so you can give them the assignment to boost your silk (commerce) income. Oh, and make sure Gong Du does not randomly besiege you.

What makes Ma Teng’s Total War: Three Kingdoms playthrough fairly easy is that you have a military alliance with your sworn brother, Han Sui. Having a military alliance will let you start an “alliance war” (or you can decline one). Be forewarned that you can’t seek a separate peace with a faction, and you’ll need Han Sui to agree as well (which, based on experience, was impossible).

Han Sui guards the westernmost area of the map, and he might whomp some nearby Yellow Turbans for you, but he won’t bother pushing forward to the east or central plains. Is that a bad thing? No, not really, because all that base are belongs to you. You’ll be free to expand while your flank is protected, gaining diplomatic bonuses as you progress.

In terms of your family members, you’ve got Hua Luanli as your wife, and Pang De as a trusted general. That’s it. Your heir, Ma Chao, is still a kid. It will take many turns until he becomes a general, and the future “Ma Chao the Splendid,” the greatest warrior on horseback in the Dynasty Warriors games. (Fans will remember just spamming regular attacks for the win.) 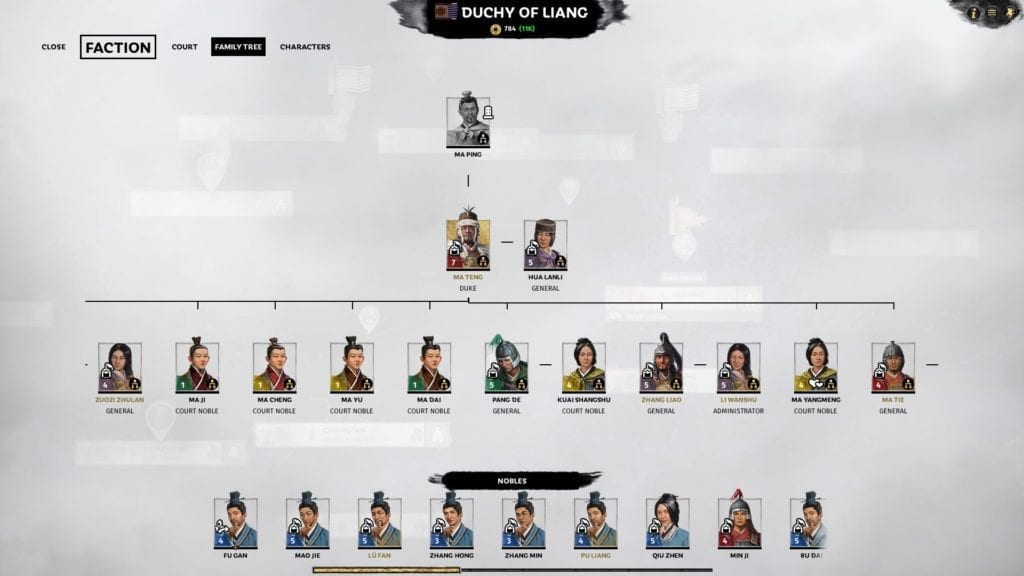 This is my (very) extended family tree halfway through the campaign. I adopted Pang De and Zhang Liao. I also adopted a generic officer named Ma Tie. Historically, that was the name of one of Ma Teng’s sons.

Dong Zhuo, the tyrant of China, has the emperor in his grasp. Early on, however, I chose to have a trade agreement with him, as well as Han Sui. You won’t encounter a lot of factions until you expand, so you’ll need the extra influx of gold.

Eventually, though, you’ll need to make a choice for your faction’s dilemma: Attack Dong Zhuo, or keep the peace?

The former lets you follow the historical route in Total War: Three Kingdoms. It’s risky but rewarding. The risk is there due to Lu Bu, who, thankfully, did not even pop up in my territory. The rewards are immense. Capturing Dong Zhuo’s capital of Chang An east of your provinces will net you control of the emperor, which automatically vassalizes the entirety of the AI-controlled Han Empire!

To annex a settlement owned by the Han Empire, simply use an army to walk up to it. You’ll need to pay some extra gold.

Dong Zhuo’s faction will soon crumble since an event fires where he gets killed by Lu Bu. His lands, now owned by his son Dong Min, are thrown in turmoil, and even a civil war erupts. You can breeze through his defenses without issues.

I did not choose the latter route of “keeping the peace.” Theoretically, you’ll probably push southwards to take out forgettable warlords like Liu Yan and Shi Xie. 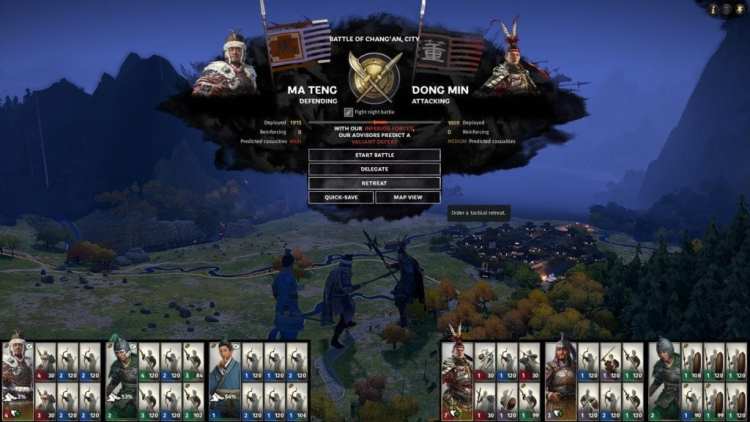 I kid. Lu Bu marched into my territory once. This went from “Valiant Defeat” to “Decisive Defeat” on hard difficulty. I had to reload an earlier save which made him move elsewhere. Do not pursue Lu Bu!

The Silk Road, Commerce, And Expansion

I mentioned earlier that you want a few strategist officers in your court. Not only are their fire arrows useful (if already unlocked), but they provide commerce, silk, and spice income via assignments or administrative positions. Since you’ve got a defensible position straddling the Silk Road, and two cities Wu Du and Hanzhong (captured from a warlord) which have silk trader buildings, commerce is the primary income-generator you’ll focus on, followed by industry later as you expand.

Once you’ve taken care of Dong Zhuo/Dong Min, feel free to expand any way you’d want to. In my case, I chose the north since I was already warring with Zheng Jiang, a bandit queen, and Gongsun Zan, a cavalry lord.

The next Total War: Three Kingdoms campaign goal for Ma Teng is to subjugate and eliminate Cao Cao. This was not an ideal move for now since Cao Cao’s lands are in the central plains where everyone and their mothers are fighting. I’ll get to it eventually. 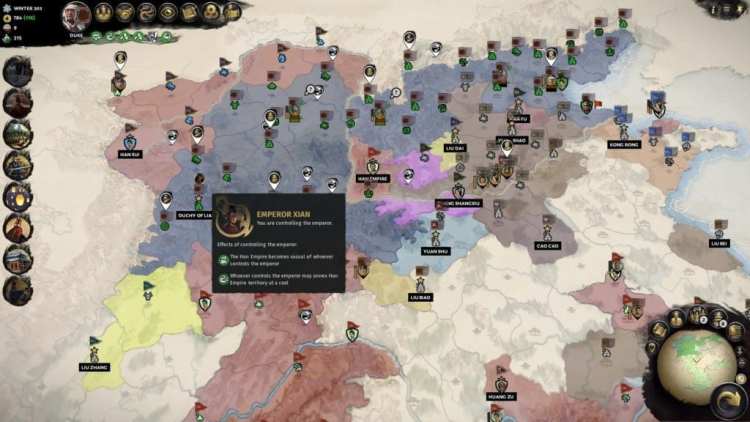 Around turn 65, western and northern China are mine. I’m still buddies with Han Sui, and the Han Empire remains my vassal due to having control of the emperor.

Again, flaming arrows via your strategists, commanders, or sentinels are your friend. Use them liberally to burn down opponents. Have a few spearmen watching your flanks in case of enemy horsemen, and a couple of sword infantry controlling the center.

As Ma Teng, your Qiang cavalry units shine as well. Since some settlements in the west and north have horse pastures, you’ll also gain discounts from cavalry unit recruitment and upkeep. They’re quite expensive early on so make sure to capture those horse pastures for yourself, Ma Chao, and your other vanguard generals. Keep your cavalry in the wings, ready to swarm archers that the AI might leave defenseless.

One last thing: In Total War: Three Kingdoms, Ma Teng is a governor, not a warlord. He cannot declare himself emperor once his prestige is high enough. He remains supportive of the Han Empire through and through. This means the later stages of your Total War campaign involve taking out all three pretenders to the throne once they declare themselves. 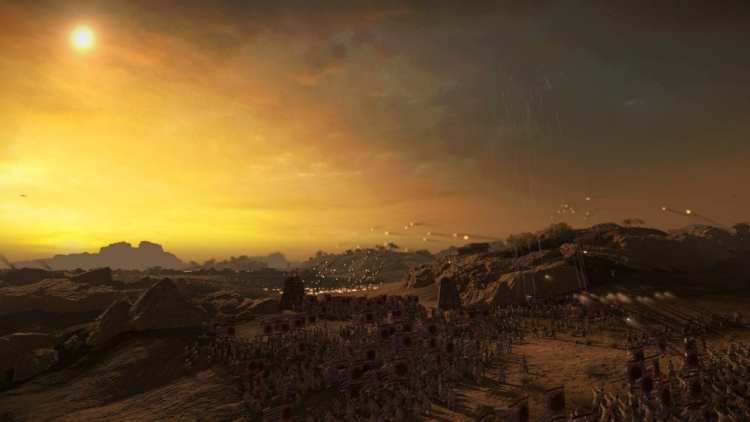 A gorgeous sunset while killing my foes in the hilly, northwest region.

Tether is back in development, team shares the struggle of making it

By Jack Salter2 mins ago
Guides