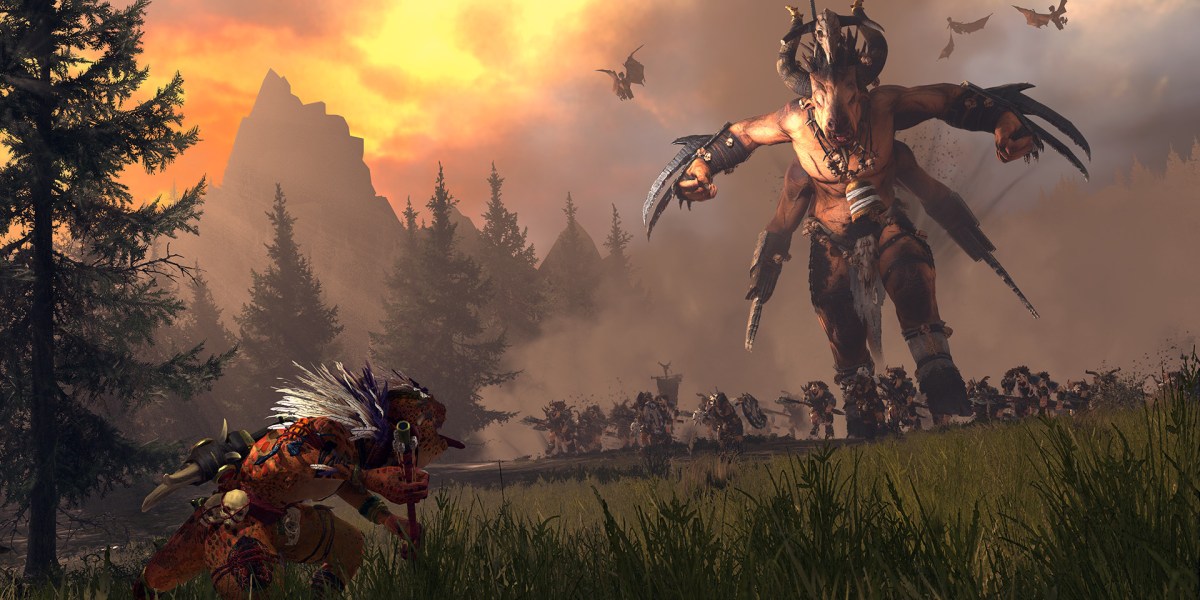 Mind you, the tiny skink wanderer and the gargantuan bull aren’t the only ones to look out for once Total War: Warhammer II – The Silence & The Fury releases tomorrow. That’s because the DLC is accompanied by a massive update with freebies/free-LC such as Thorek Ironbrow (a new legendary lord for the Dwarfs), recruitable Ogre Mercenaries, the Great Bray Shaman generic lord, and a beefy (pun intended) Beastmen rework.

Legends speak of how Taurox spent a year rampaging across the countryside, killing everything in his path. Overcome with exhaustion, he drowned in a river of blood that overflowed from all his kills. Khorne and the other Chaos Gods, who normally ignore the plight of the mutated Beastmen, took pity on him. He was given a new life, with his body encased in nigh-impenetrable brass armor.

In the campaign, Taurox uses the Momentum and Rampage mechanics (showcasing his capabilities from the lore). As long as Taurox is winning battles, his Momentum increases, allowing him to replenish his movement points so he can continue advancing. This builds up Rampage that provides additional bonuses, many of which are well-integrated with the Beastmen rework (more on this later).

Make no mistake, Taurox is an absolute blast to play, owing to ultra-aggressive expansion. He even has a raiding stance that’s akin to forced march while still being able to attack. It’s possible to continue battling and leveling up multiple times in a single turn if you use his mechanics properly and if you can get a bit of luck on your side. One can be easily reminded of Lu Bu’s own quirks in Total War: Three Kingdoms – A World Betrayed, hence why calling Taurox “Lu Bull” seems apt. 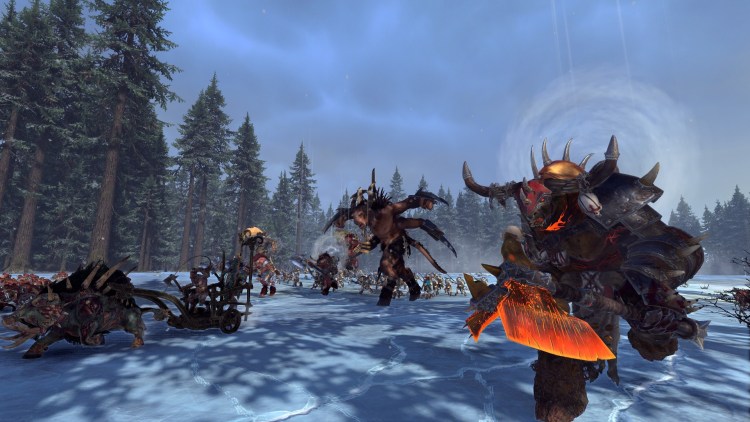 Oxyotl and the Visions of the Old Ones

Opposing Taurox is Oxyotl, a Chameleon Skink champion of the Lizardmen. While protecting a temple city, Oxyotl was tricked by the Chaos Gods and transported to the Realm of Chaos. However, rather than become corrupted or go mad, Oxyotl proved his resiliency and managed to return to the material plane.

In Total War: Warhammer II – The Silence & The Fury, Oxyotl receives Visions of the Old Ones missions, detailing threats all over the campaign map. Since he’s had experience traversing the realms, he’s able to teleport instantly to battle a particular target. By completing these tasks, he earns points that give Blessed Spawnings or resources to build Silent Sanctums on any settlement in the game. The Silent Sanctum’s structures provide bonuses like unit buffs and line-of-sight, as well as a means of triggering a random Lizardmen ambush. Even better, certain buildings turn the Silent Sanctum into a fast travel point of sorts.

To be fair, Oxyotl’s mechanics are still fairly decent (better than what most legendary lords have). His playstyle and skirmish-focused gameplay emphasize flexibility in tactical match-ups and campaign progression. However, the overall experience does pale in comparison to Taurox’s “keep fighting and annihilate everything” concept. 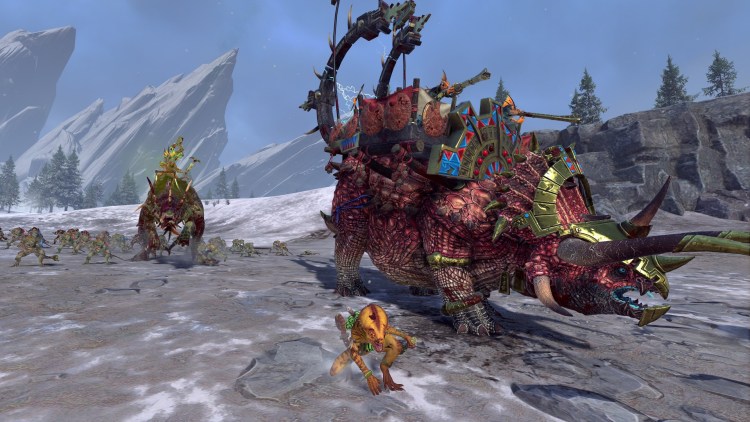 The Beastmen rework and new content from the free update

The Beastmen rework will surely be the most talked about part of the free update that releases alongside Total War: Warhammer II – The Silence & The Fury. For the longest time, the Beastmen were just a terrible race to pick. Thankfully, the rework immensely changes the faction. There’s the addition of Herdstones (mini-settlement building chains) that create Bloodgrounds. These large swaths of land are marked by devastation, as successful bouts and razed settlements add points to the Bloodground itself. Once you’re happy with the points that you’ve earned, simply enact a ritual. You’ll lock down all the ruins that are part of the Bloodgrounds to prevent the AI from colonizing them.

As you progress, you’ll earn more faction-wide bonuses (i.e., additional Herdstones and army caps). Likewise, Beastmen units no longer use gold. Instead, you acquire Favor and Dread via expansion. The former lets you construct horde buildings and purchase equipment. The latter, meanwhile, helps you increase unit caps, earn upgrades, and unlock the other Beastmen legendary lords.

Moreover, you’ll see the inclusion of Thorek Ironbrow, a Master Runesmith who leads his own Dwarf contingent. And, of course, the Ogre Mercenaries might spawn during your campaign. These fellas pack a punch, and they help bolster your armies. They also set the stage for units, factions, and mechanics that we might eventually see in Total War: Warhammer III (i.e., Ogre Kingdoms and Dogs of War). 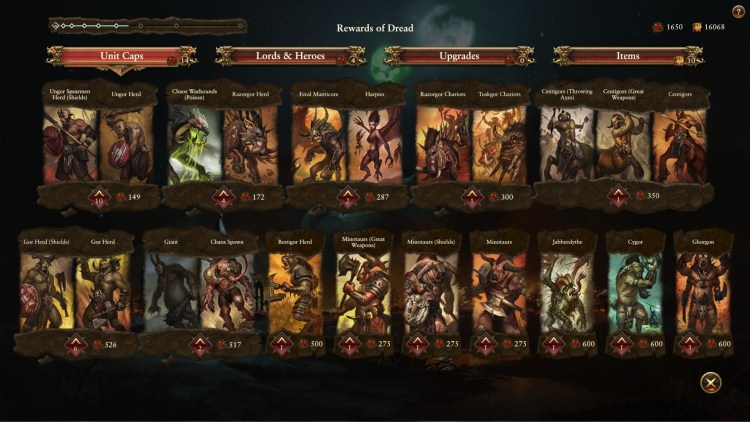 Issues with Total War: Warhammer II – The Silence & The Fury

To clarify, I did experience a number of issues while playing Total War: Warhammer II – The Silence & The Fury. For instance, I noticed that it was possible to lose all of my extra movement points as Taurox after choosing to raze or sack a settlement. This happened whenever I recruited a unit followed by cancelling the recruitment process. Moreover, I had problems with the Bloodgrounds mechanic since the interface can be a little unclear. You might build a Herdstone on a captured settlement, but there are some adjacent locations that don’t actually count towards the Bloodground’s area. If the AI sneaks up on you to take over one area, you might lack the means to gain more points. In my case, I couldn’t find enough battles to fight or relevant settlements to raze.

Meanwhile, Oxyotl’s campaign can be a hassle due to the final battle’s requirements and victory conditions. The panel mentioned that I needed to complete five hard Visions of the Old Ones missions. As it turned out, I had to finish three, then six, then eleven easy ones (no other difficulty tiers popped up). That greatly extended the campaign and, once I was able to reach the last stages, I was suddenly told that I had only five turns left to do the final battle.

Still, I’ve been told that there will be a few tweaks and fixes in time for the DLC’s release tomorrow. I’m hoping that these issues will get ironed out soon. 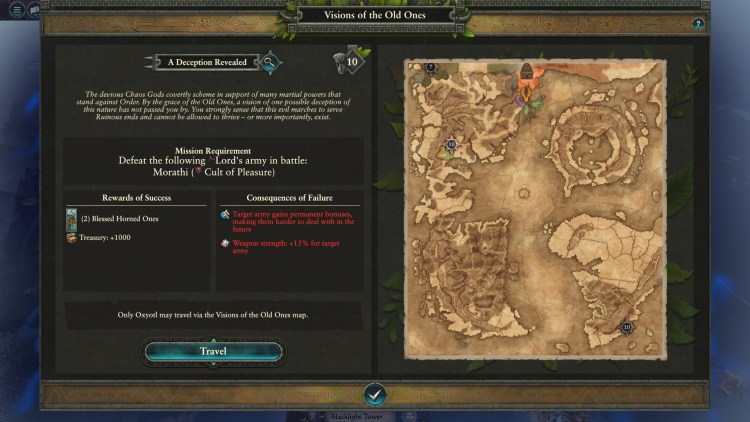 Is Total War: Warhammer II – The Silence & The Fury worth it?

The answer is a resounding “yes.” Even with some minor issues, being able to play as Taurox was already a treat. As for Oxyotl, though he paled in comparison, he manages to add that icing on the cake. These two have refreshing mechanics that are sure to keep you engaged. Likewise, the DLC lets you field new units, lords, heroes such as the Skink Oracle, Feral Troglodon, Doombull, Ghorgon, and Jabberslythe (which probably cost a few Charlemagnes).

Now, even if you don’t pick up the DLC, you can still try all the new additions thanks to the free update. Assuming you own Call of the Beastmen already, then the overhaul will let you test these mechanics while campaigning as Khazrak, Malagor, or Morghur. All in all, Total War: Warhammer II – The Silence & The Fury is a great way to close out the game’s cycle. 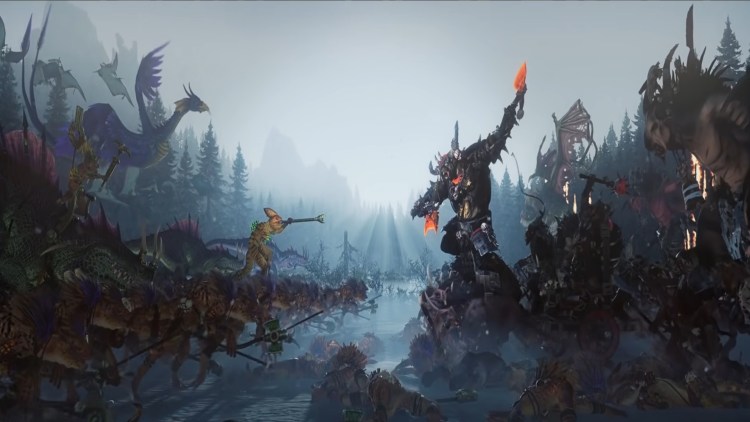 Rumors abound that Judgment series may end over PC disputes

By Jason Rodriguez11 hours ago
Features