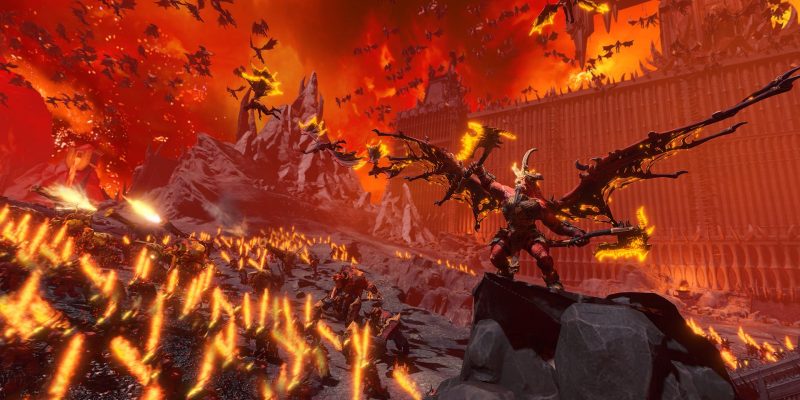 In the history of Warhammer, be it Fantasy or 40K, the name Skarbrand is one to be reckoned with. Now, the greatest of Khorne’s Bloodthirsters will lead the Blood God’s faction once again in Total War: Warhammer III.

Skarbrand, also known as the Exiled One, has a very fitting moniker. Through the machinations of Tzeentch, Skarbrand attacked Khorne while the Blood God’s back was turned. Enraged, Khorne banished the Bloodthirster champion from the Realm of Chaos, leaving him trapped in the mortal world. There, fueled only by wild rage and abandon, Skarbrand continued to kill, maim, and burn.

In Total War: Warhammer III‘s campaign, Skarbrand is armed with his twin axes, Slaughter and Carnage. Likewise, he’s able to blast foes with a devastating fire attack, and his mere presence can induce rampage on unsuspecting denizens. While under the effects of rampage, enemy units will simply be unable to retreat despite losses, their minds temporarily enraptured by sheer bloodlust and wanton destruction. 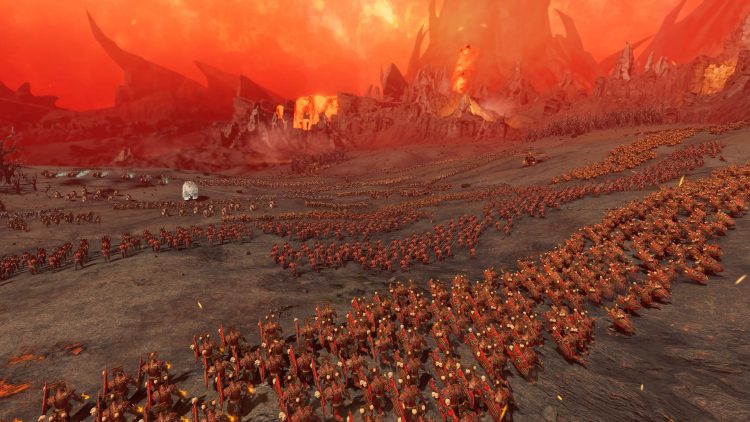 As for Khorne’s forces, previous reveals such as the showcase trailer and Survival Battle gameplay video have shown us Chosen units, Furies, Bloodletters, and even a generic Bloodthirster known as a Gatekeeper. These warriors and daemons are blessed by Khorne and, as such, they detest the use of magic. Instead, these units prefer to get up close and personal. The longer they stay in the melee press, the more bonuses they acquire.

You can check out Total War: Warhammer III’s Steam store page and watch the new “World of Khorne” trailer below.

Still, fans wouldn’t need to wait for Warhammer III just to get new content. That’s because Total War: Warhammer II will have its final Lords Pack DLC called The Silence & The Fury. The DLC features Taurox the Brass Bull leading the Beastmen (which implies that we could see a Beastmen rework to make the faction more in line with newer ones).  In the lore, Taurox terrorized the lands of the Empire until he gained the attention of the Chaos Gods. From a being of flesh and bone, he was remade anew, coated in brass armor. In the campaign, Taurox’s forces gain Momentum so they can continue fighting.

Taurox is set to fight against Oxyotl, a Chameleon Skink who’ll lead the Lizardmen. Oxyotl’s story is fairly strange. Tricked by the malevolent deities, Oxyotl found himself in the Realm of Chaos. There, he had to wander and survive, eventually reappearing in Lustria. He is one of the few non-daemonic entities to have entered the Realm of Chaos without going mad or devolving into a gibbering mess. In the game, Oxyotl will be able to traverse the world map thanks to Secret Sanctums.

Total War: Warhammer II – The Silence & The Fury is set to release on July 14. You can watch the trailer below.