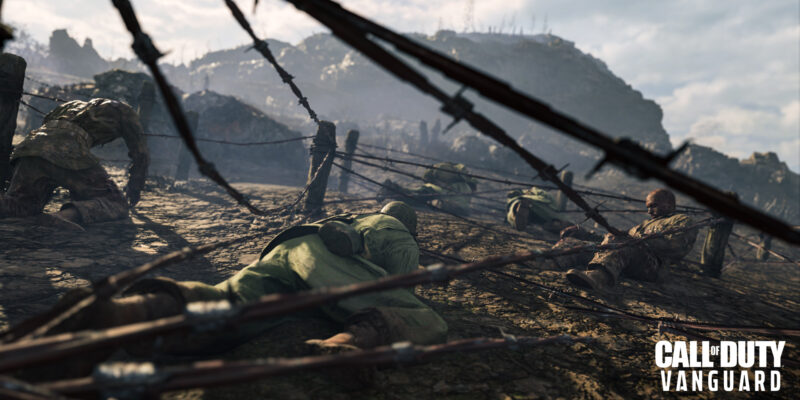 Call of Duty: Vanguard is set to launch on November 5. So far, we have learned a lot about what multiplayer will have in store for fans at launch. The mode includes 20 maps, three different types of combat pacing, destructible environments, and more. A beta was also rolled out allowing players to get hands on experience with multiplayer before release. However, we have not learned much about Zombies in Call of Duty: Vanguard. Aside from knowing that Treyarch will continue to develop the Black Ops Cold War Dark Aether story in Vanguard, fans of the mode have been left, quite literally, in the dark. Thankfully, we will not have to wait much longer for the Call of Duty: Vanguard Zombies reveal.

Recently, the official Call of Duty Twitter page shared artwork for Call of Duty: Vanguard Zombies. The tweet also contains the terms zombies, dark aether, and demons, leaving fans excited for what’s to come. Most importantly, a date was given for when more details will be shared about the mode.

What could feature in the Vanguard Zombies reveal?

Just from the artwork, it seems that Zombies in Vanguard will be action packed. Many fans are speculating that the figure in the middle of the artwork could be a young Eddie Richtofen. After all, in the conclusion to Black Ops Cold War Zombies on the Forsaken map, it was revealed that Richtofen was the director of Requiem all along. Perhaps, we could be exploring his character more in the upcoming title. Without any confirmation from the developer, we can only speculate for now.

There is not much longer to wait until the Call of Duty: Vanguard Zombies reveal. We will know more on October 14 at 8AM PT/11AM ET, where we can expect a bunch of announcements about where the undead mode will take us next.

Zombies + Dark Aether + Demons!? 🤘#Vanguard is bringing one of your favorite modes with a sinister twist.

Chasing Static review — You are only coming through in waves