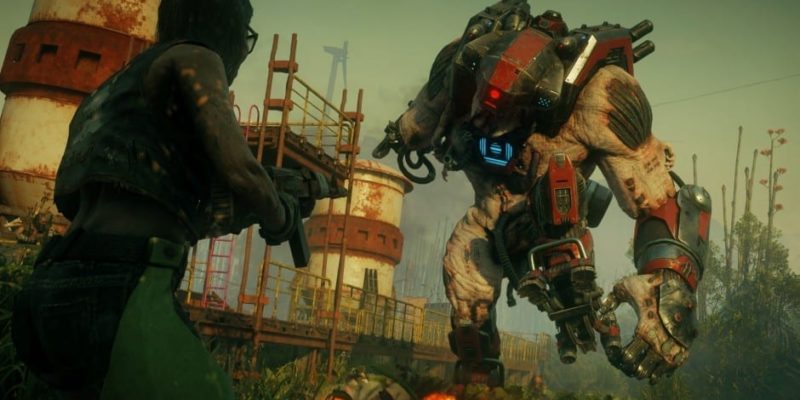 During tonight’s E3 conference, Bethesda announced that new weapons, vehicles, and other free DLC content are headed to Rage 2.

The vehicles on offer include a pilotable mech, appropriately named the “Boom Bringer.” Other vehicles will include a one-wheeled “Armadillo” vehicle, as well as something called the “Ghost” motorcycle. While it isn’t entirely clear what the motorcycle is, Bethesda’s official blog states that the motorcycle hints toward the upcoming Rise of the Ghost DLC.

New dynamic events are also in the works for Rage 2. Players can expect something titled “Global Worming,” which features a horrifying and enormous sand worm for the player to fight against. A second dynamic event will involve a major “Bug Storm,” forcing the player to combat large swaths of insects.

Lastly, the free DLC will include, of course, new weapon skins, daily events, and cheats. The three cheats include “Bloody Mess,” which looks to blast enemies into a cloud of nothing. The second is called “Low Gravity,” which lets the player float above bosses. The final and most painful looking cheat is something called “Rejecter Seat,” which allows the player to fly out of their vehicle so it goes careening into a crowd of enemies.

All of the free DLC shows that Avalanche is dedicated to keeping the game up-to-date. We recently covered some of Rage 2‘s patch notes. The recent fix included the removal of the somewhat troublesome Denuvo software, which is meant to combat piracy, but can have some negative effects on performance.

Check out the Rage 2 E3 trailer below. It features a painfully campy throwback to 90s family TV shows, something like the intro from Full House or Growing Pains. For those who are interested, also check out our Rage 2 official review as well as our technical review. Expect to see some true carnage in this trailer.

Devolver Bootleg is actually real and on sale for 1% off