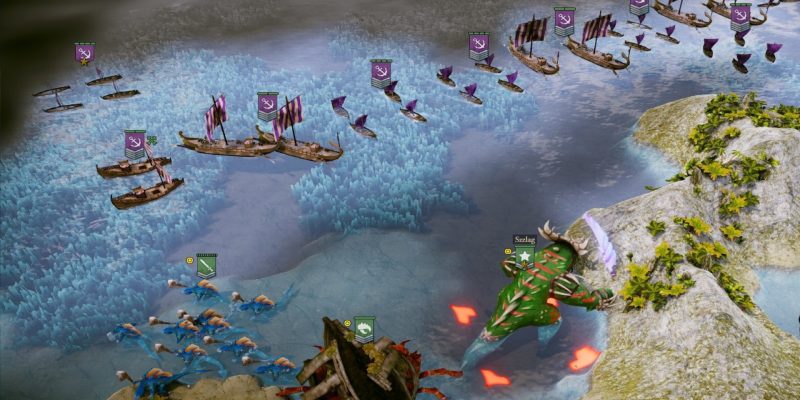 Fantasy General II: Evolution, an expansion that puts you in the scaly shoes of Szzlag, a hero of the Lizardfolk, comes out today. Although the expansion still retains the core mechanics from both the Onslaught campaign and the Empire Aflame expansion, it gives a unique twist since you’re following the journey of a reptilian character.

Indeed, it already made me chuckle several times even after the first few missions. In any case, my impressions will also include some tips. However, be forewarned that there will minor spoilers due to a particular twist that happens early in the campaign.

Fantasy General II: Evolution‘s campaign begins with Sszlag and his siblings looking for food. From the get-go, it seems that consuming stuff is a key theme in this expansion.

Anyway, this small group is looking for crabs, and the crusty crustaceans are no match for them. But, do be careful when advancing with some of Sszlag’s siblings — who are paired up, with each pair referred to as twins. They count as unique characters that need to survive lest you’ll fail the mission. Fortunately, lizardfolk units (at least low-tier ones) have the “Retreat I” perk. There’s a chance they could back away from opponents if they’re about to get attacked.

Oh, and the troupe also has a witch doctor named Hrazzkar. He’ll be integral as you push onward since he can damage enemies from up to two hexes away. 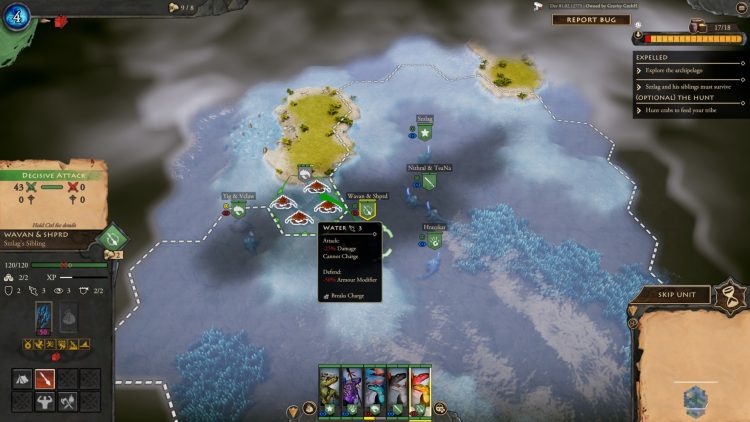 It doesn’t take long for the merry band to encounter humans. It seems imperial troops are out to explore the swamps. They do seem friendly enough, and they’re even fighting hostile animals in the area. Unfortunately, friendship isn’t forever and Sszlag will discover a lizardfolk village that has been ransacked by the outlanders.

From here, the imperial soldiers will become your enemy, and you’ll need to watch out for their ranged units, fortified positions, and ships. Thankfully, lizardfolk units are more than a match for the pitiful humans since they’ve got increased movement when traversing water tiles. My only gripe here is that, although your units have the “Water Fighter” perk (ignores combat penalties and increases damage while on swamps, rivers, and deep water), hovering your mouse over these kinds of tiles still shows the penalty. It can be a little misleading at first. 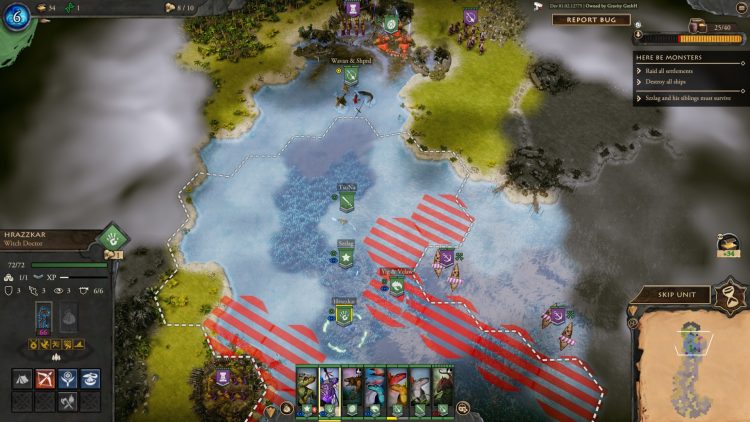 Likewise, something’s brewing among Sszlag and his kin. The siblings begin to take umbrage with their leader’s orders and, to teach the group some respect, you can choose to devour one of the twins to gain an Evolution Point. This mechanic is important in your Fantasy General II: Evolution run as this allows Sszlag to turn into a deadlier version of himself. Yes, he’s one of those unique fellas who has a skill tree (normally reserved for heroes) and an upgrade tree (normally reserved for units).

These changes will increase Sszlag’s HP in your Fantasy General II: Evolution playthrough. Additionally, his tier 2 upgrade gives him “Flesh Eater” (+20% HP regen after killing a mortal unit). His next transformations make him immune to fear or routing (tier 3), while also causing him to do just that to enemies (tier 4). 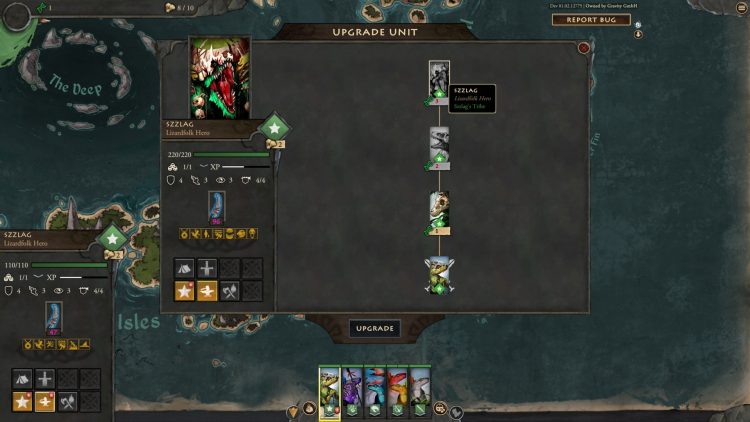 Sszlag’s siblings will eventually grow impatient, and you’ll soon find yourself in a mission where he’s alone and wounded. It turns into a chase through the jungle where you have to reach a village with friendly lizardfolk.

You’ll have some allies to watch your back and you can eliminate the soldiers that your wayward siblings have sent. At this point, Fantasy General II: Evolution‘s campaign opens up. 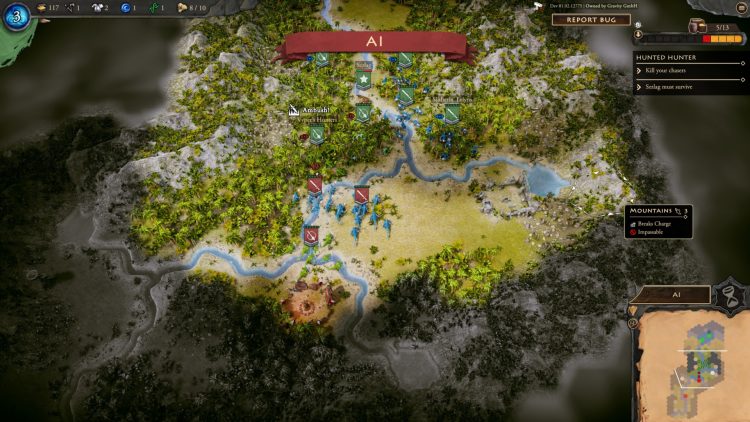 Your surviving siblings (and the witch doctor) will establish their own hovels and breeding grounds. Make your choice as to how you’ll tackle each mission that pops up on the world map. Do you want to eliminate the sibling who loves crabs, and who now has a giant crab of his own? Or do you want to take out the witch doctor who’s been communing with the Old Ones?

Each mission you undertake will bring you closer to a battle with that target and, upon completion, you’ll gain another Evolution Point. Oh, and remember that twin that you didn’t eat earlier? She’ll provide a whopping four Evolution Points. 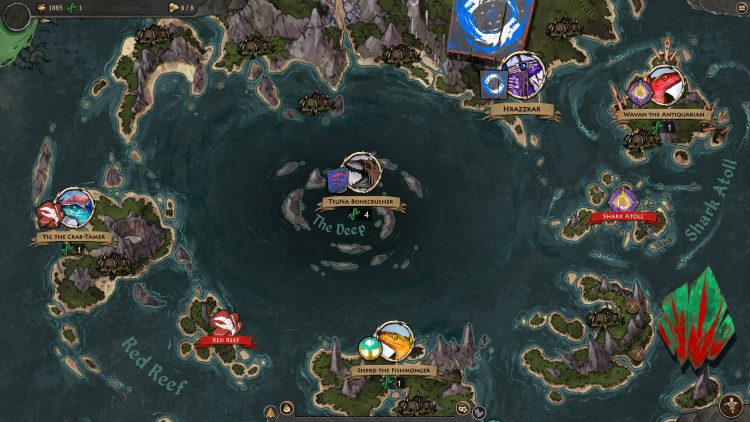 As cited earlier, Sszlag has his transformation upgrades, but you can also obtain some skills. My suggestion would be to go with the middle branch until you get “Fast Metabolism.” This lets your hero regenerate 20 health points each turn. Later, consider getting “Rage I” and “Rage II” (damage boosters) and “Dominate” (makes a routed non-hero unit side with you for the remainder of the battle). The last one should be “Lizard Leader” which gives you a discount on all lizard units while preventing them from routing.

Regarding the lizardfolk units in Fantasy General II: Evolution, your early-game recruits are lizard newts (magic light skirmishers) and lizard newt clubbers (light melee infantry). Both types can be upgraded into tier 2 units like lizard warriors, lizard hunters, or lizard shellers. Who knows, you might even be able to get sea creatures like crabs to fight for you?

Bear in mind, however, that the top-tier units for the lizard faction not only cost the usual resources like weapons, armor, and gold, but also Evolution Points. These units are the Devourer (monster), witch doctor (ranged magic caster), and Swamp Dragon Rider (aerial monster). Take note of the Evolution Points you have remaining since you’ll want to prioritize Sszlag’s transformations before the ones that your regular units can get.

All in all, I’m liking what I see so far in Fantasy General II: Evolution due to the points mechanic and a more freeform way of picking your objectives. In any case, for more information, you can check our Fantasy General II guides and features hub. 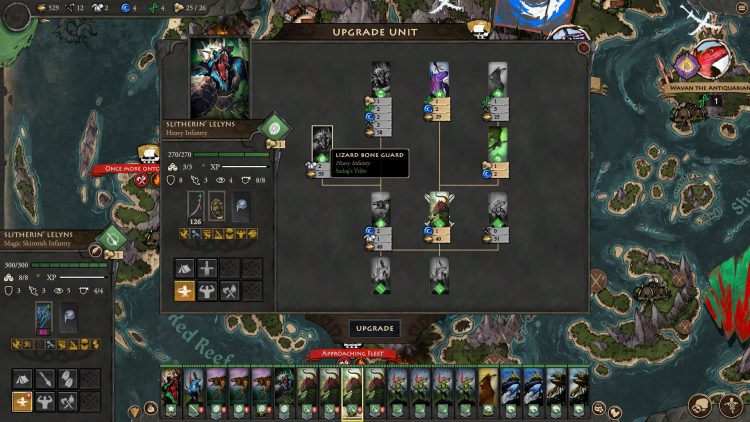