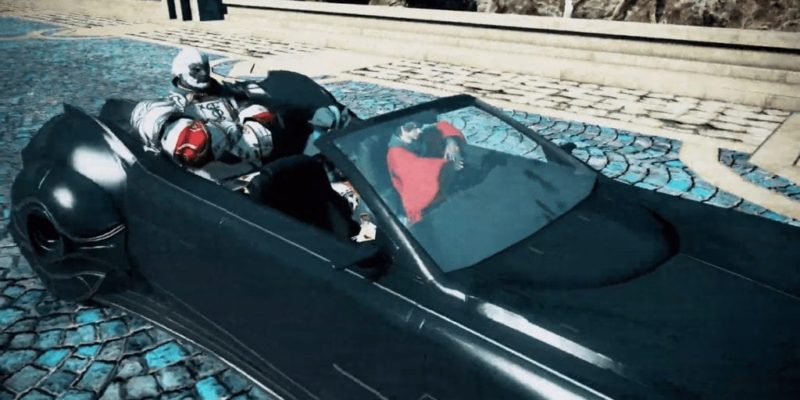 Looks like Final Fantasy has finally run out of franchises to cross over with and has resorted to a partnership with… itself? That’s right, Final Fantasy XIV and XV are coming together to bring the sleek and elegant Regalia to the MMORPG in a crossover event set for April. The car is just the icing on the cake

Square Enix hasn’t gone into much detail about the event, but we can tell from the end of a new trailer that it’ll include a four-seat flying mount for you and your friends. This is, of course, a reference to the air-bound Regalia you unlock at the end of FFXV.

The wait leading up to this event has been a bit odd, considering the FFXV players got their FFXIV unique battles back in December of 2018. Maybe the drama behind the scenes at Square caused development to get a bit behind? What with famed director Nomura leaving and FFXV‘s DLC getting canned. But that’s pure speculation.

Alright enough of the bad stuff, it’s time to hang with my favorite Hot Topic poster boy Noctis. Judging from the trailer, it looks like we’ll be teaming up with the leather-clad lad to take the fight to some Magitek soldiers and mechs, as well as some other enemies.

But it’s not just that, seems like you might get your very own version of Noctis’ trademarked sword teleport? Then, after you get all tuckered out, there seem to be some camping segments as well. My guess is it’ll be an emote or something similar, but I’d love if it was a whole new mechanic.

Still, it seems like FFXIV is taking this event very seriously as a way of showcasing the most prominent mechanics/aspects of FFXV. I know there’s FFXV‘s developmental history, canceled DLC, and mixed reviews, but still, the game had a lot to offer. It also seems like the team behind FFXIV agrees. But of course, they would considering how they’re part of the same company.

More Crossovers On The Way

But that’s not all, remember that the Shadowbringers expansion is well on the way. This expansion also features a Nier: Automata crossover raid along with the Gunbreaker class. It just goes to show that the Final Fantasy franchise is aiming at the record for most crossovers ever, though Monster Hunter might have its sights set there as well.

What do you think? Are you excited to play Final Fantasy within Final Fantasy? Which of the four FFXV boys would you want in your raid group? Let us know your thoughts in the comments down below.