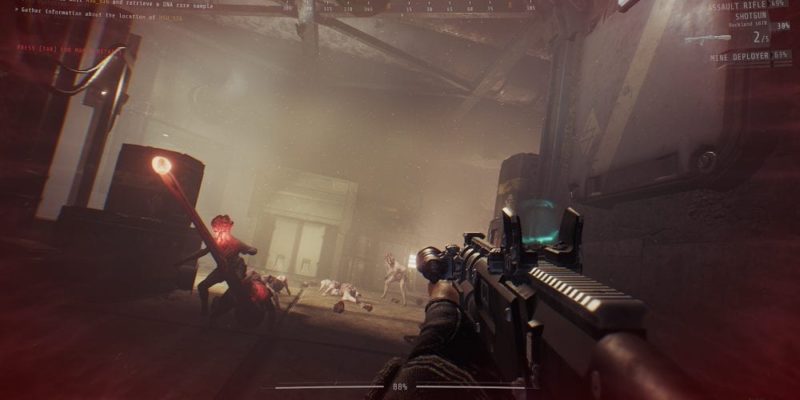 GTFO, the four-play cooperative horror FPS from former Payday developers, is now in Steam Early Access. Announced nearly four years ago, GTFO puts you on a team of four prisoners held captive by someone simply known as “The Warden.” You’ll be sent to complete various tasks, using your wits and communication to survive. These tasks get increasingly difficult, with only around one percent of GTFO’s alpha testers making it back.

When starting the game, you’ll receive the “Rundown,” which are the work orders you’re given by The Warden. Although various aspects of the work will change – including the monsters you’ll face and environments you’ll enter – one thing remains consistent, according to developer Simon Viklund. “What is always constant in GTFO, is that survival hinges on the cooperation between the members of the team. Work together or die together.”

Ulf Andersson, head of developer 10 Chambers Collective, said they’re using the Early Access period to “test the Rundown concept; different types of expeditions and challenges, how long should they last, how often we’re going to put out new ones, and so on.” Regardless, Andersson says it’s “a very ambitious Early Access release,” allowing gamers “the chance to experience content that may never exist again.”

10 Chambers Collective is a studio founded by former developers from Overkill, the studio behind Payday: The Heist and Payday 2. The team started development on GTFO back in 2015. Since then, the game has only been shown to alpha testers and a few select journalists. The only public showing was a few days ago when GTFO had a 24-hour trial period.

While testing, 10 Chambers Collective has amassed a Discord server of around 80,000 members talking about the game. Andersson encourages new players to join the Discord to find teammates: “Our Discord is of huge help as GTFO wouldn’t work with the usual random match-making mechanics. As this game is a challenge for hardcore gamers, you will need to find the right teammates. The official GTFO Discord is a good place to look.”

Trials of Mana gets the first of three character trailers

By Stefan Bahruth16 hours ago
News