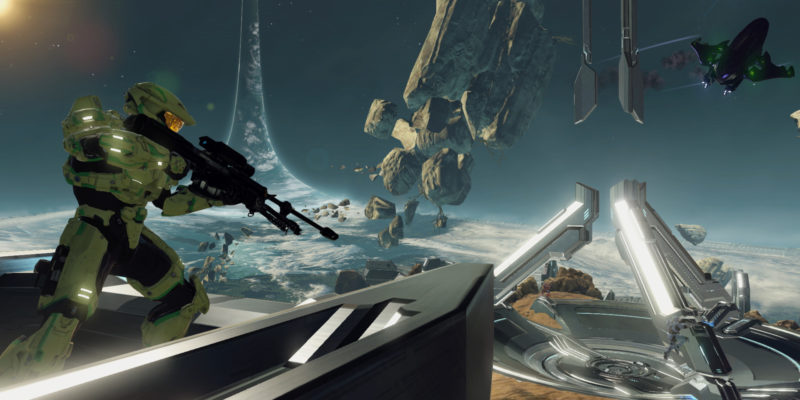 Halo 2, long considered as one of the greatest games ever made, makes its way to PCs. Well, okay, it sort of did back in 2007, but we don’t talk about that port anymore. Instead, we’re talking about a different one — Halo 2: Anniversary that’s part of Halo: The Master Chief Collection. It promises optimizations for PCs including 4K UHD support, enhanced graphics, 60+ FPS, field-of-view (FOV) customization, and more. Here’s our technical review. 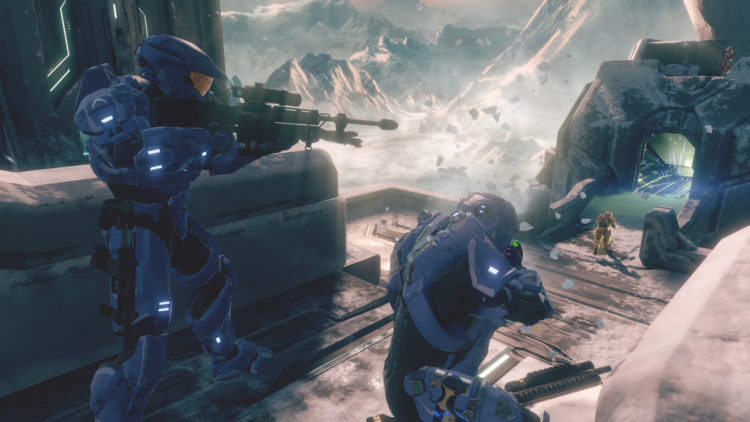 The system requirements are from Halo 2: Anniversary‘s Steam store page. They’re similar to the ones for Halo: Reach and Halo: Combat Evolved Anniversary (Halo: CEA), two games which we already featured months ago, since they’re part of the same compendium. No need to worry because my rig hasn’t changed and I’m still well above the requirements.

Just to add, you won’t be able to preload the game. Instead, you’ll first need to launch Halo: The Master Chief Collection and start the installation for Halo 2: Anniversary‘s campaign (20.1 GB) and multiplayer components (11.3 GB) from the menu. Oh, and one more thing, make sure that multiplayer is being downloaded after the 20.1 GB installation. In my case, I had both campaign and multiplayer selected for installation — I was able to play the former, but the latter didn’t automatically download. 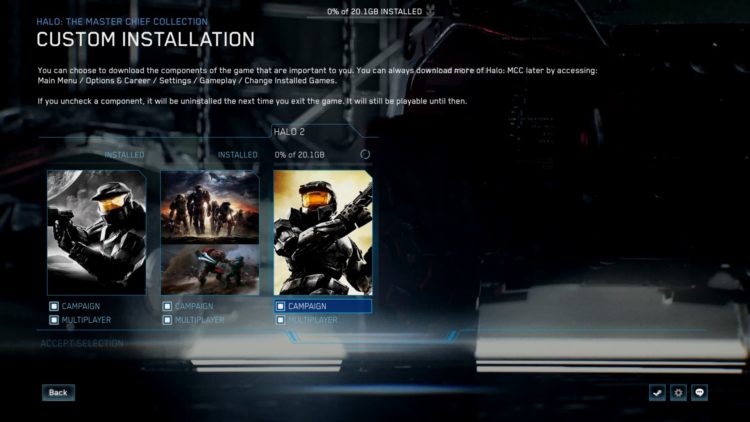 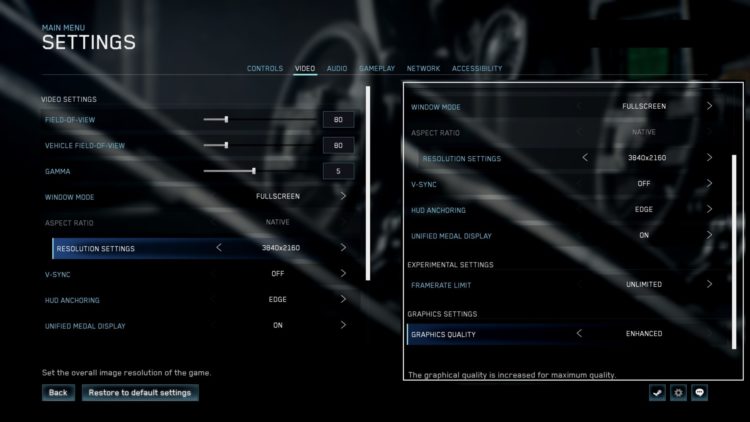 The options aren’t quite different from what we’ve seen before given that these are universally present across all content. The “Enhanced,” “Performance,” and “Original” graphics quality presets are still around, mind you, so there’s very little in the way of customization.

Halo 2: Anniversary also has a similar feature found in Halo: CEA, that of toggling between the remastered and original textures (default “Tab” key). That brings us to our graphics comparison section.

I’ve selected several moments from the campaign to compare the original/classic and remastered versions. Take note that I’m using the “Enhanced” preset at 4K UHD resolution. As usual, click on each image for a larger view.

The Outskirts of New Mombasa 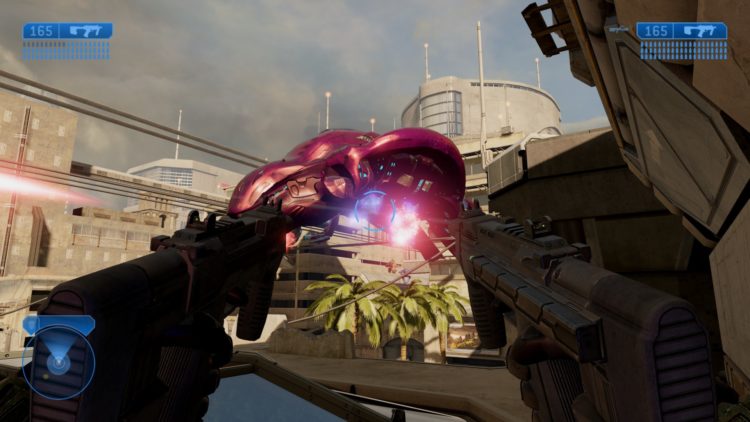 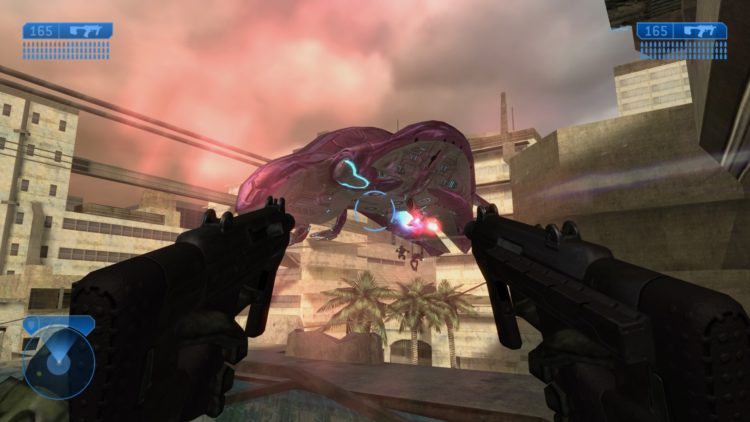 Playing as the Arbiter 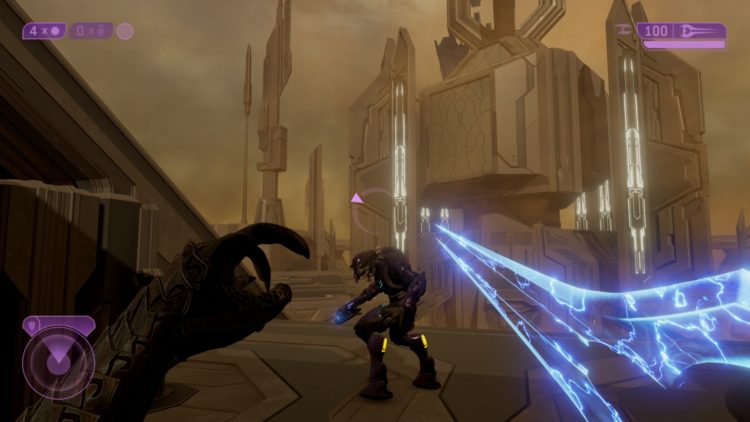 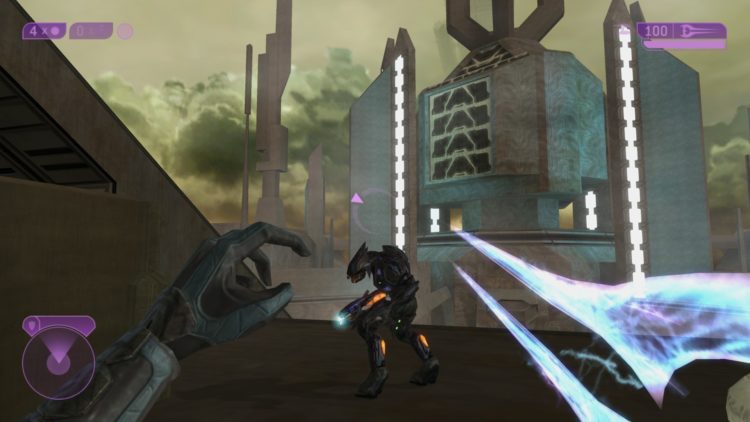 Blasting mobs in the Gravemind mission 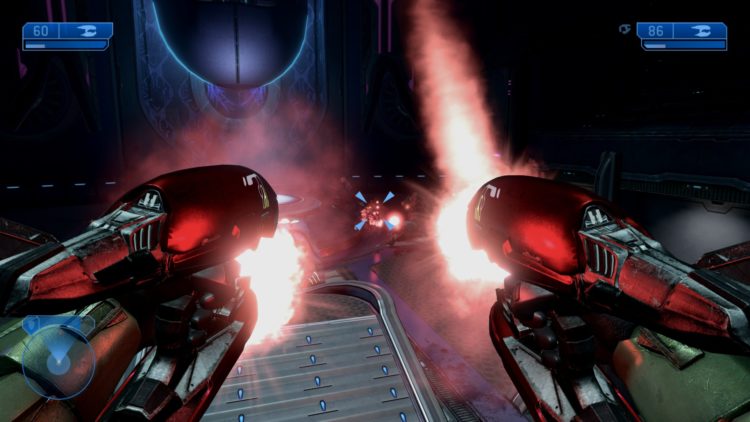 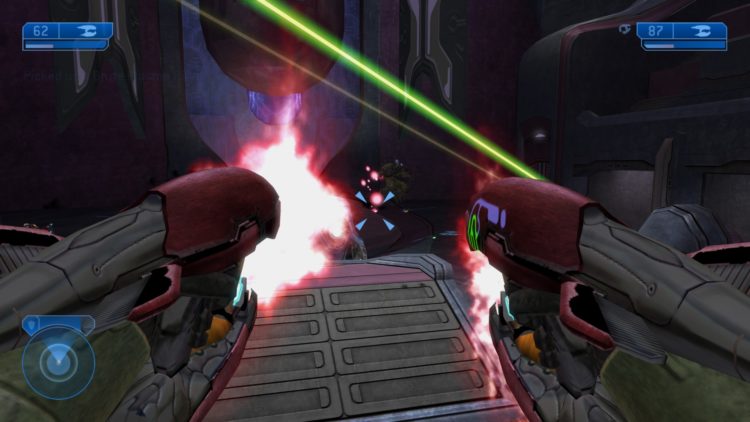 Chasing the High Prophet of Truth in the Gravemind mission 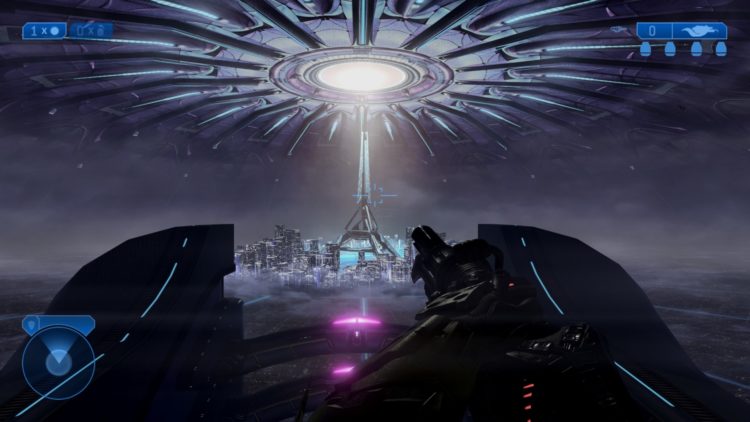 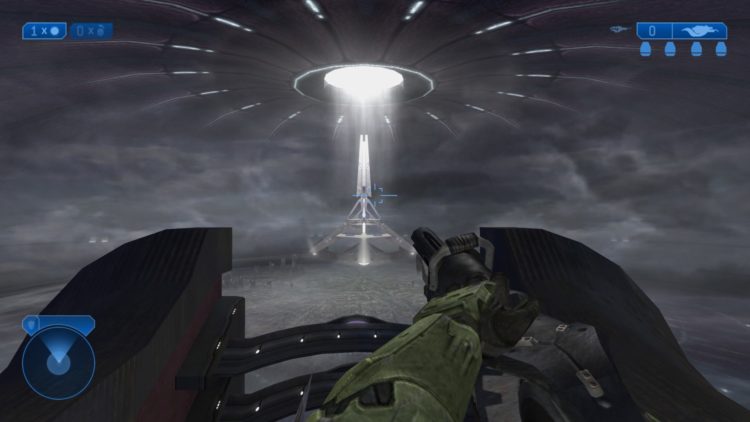 There’s no denying that the remastered/enhanced changes are highly noticeable when you’re playing Halo 2: Anniversary. One need only look at the vivid and striking detail of weapons, structures, and visual effects to spot the differences. Blasting opponents with dual-wielded plasma rifles or watching the Arbiter’s sword flashing with arc energy are definitely treats to behold.

Likewise, I didn’t experience a lot of problems when it comes to framerates. Most missions held up at 70-90 FPS using remastered visuals. Switching to classic mode, meanwhile, led to 200+ FPS.

Unfortunately, given that we’re looking at a re-release of an Xbox One game from 2014, there were times when the graphics won’t just cut it in today’s day and age, especially for PCs. It might not be that obvious in screenshots, but it’ll be very glaring while playing the game. In a way, most textures and backgrounds feel static and lifeless at times even with the visual upgrades.

Below, you’ll see the available control settings for Halo 2: Anniversary: 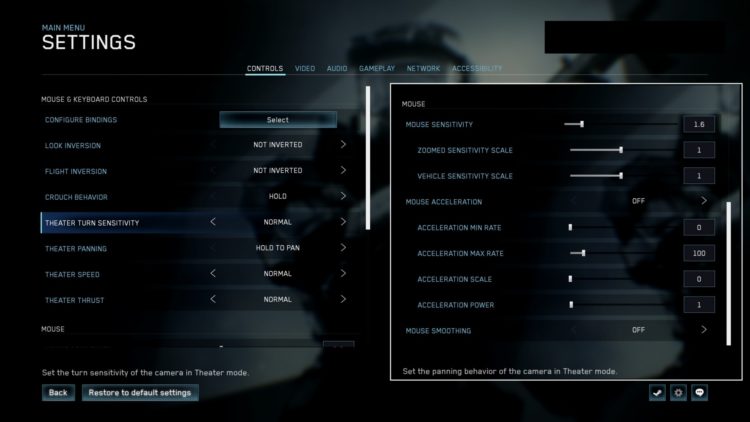 Again, there are no major changes here until we look at the keybindings. This is where you’ll notice the dual-wielding action that’s introduced in the game. The Arbiter’s cloak is also bound to the flashlight button (default “4”) though it’s not mentioned in the settings. 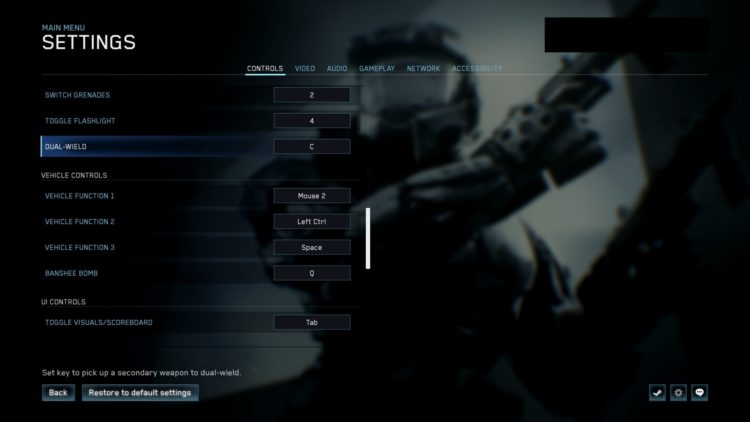 While we’re on the subject of dual-wielding, I must admit that it was one of the coolest mechanics I’ve seen in the original Halo 2. Fast forward to the present, and I also couldn’t believe how clunky the implementation remains even with the remaster. Your dual-wielded weapon is automatically dropped when you’re throwing a grenade, meleeing, or swapping to another weapon. It’s as though Master Chief forgot to add holsters to his Mjolnir armor, so he has to pick up his dropped items once more.

Control and keybind settings are also reset when you exit the game. As such, you’ll need to make changes after relaunching. With regards to targeting, it just feels a little “off” at certain times — moments when you’d think that projectiles should’ve hit or heavily damaged a target, but hostiles didn’t even flinch.

In any case, here are the gamepad controls (default button layout): 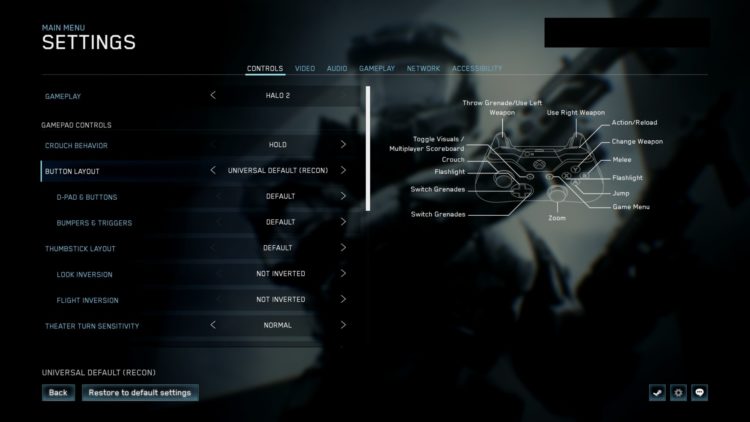 Below, you’ll see the audio and gameplay settings; I’ve just combined the two into one image. Note that the gameplay settings panel also shows you the installed products that part of Halo: The Master Chief Collection: 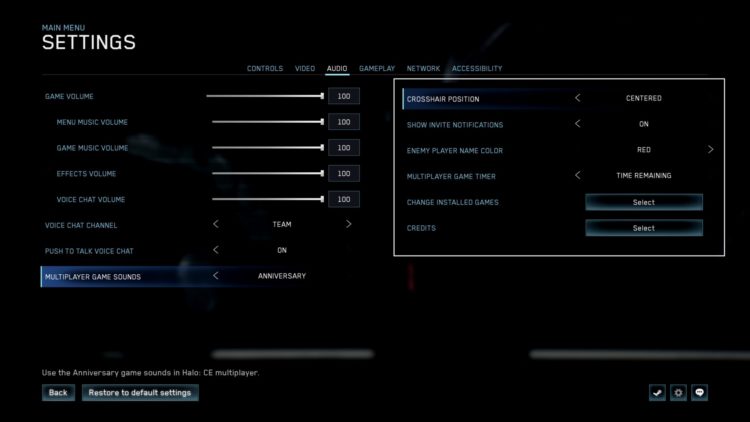 Again, no major changes here. The same can be said for the accessibility and language settings: 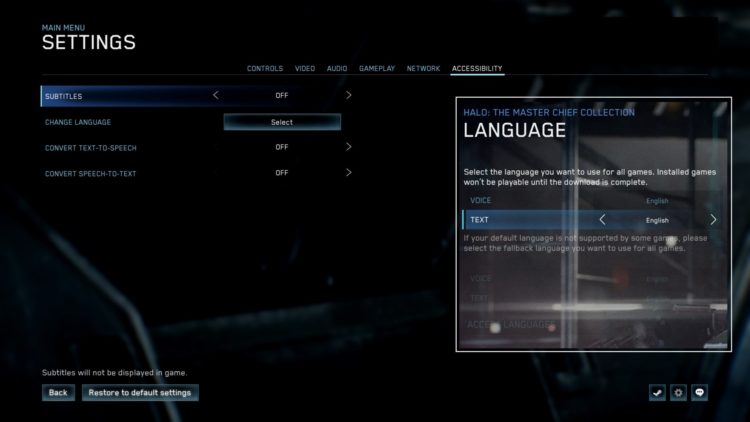 Since we’re already talking about the audio, there is something strange going on with Halo 2: Anniversary‘s dialogue voiceovers and sound effects. Granted, the game’s audio has also been reproduced and improved for the remastered version. However, toggling between the two visual settings (mentioned earlier) can lead to muffled or muted sound effects.

I don’t recall experiencing this often in Halo: CEA, but the issue is even more pronounced in Halo 2: Anniversary. There were times when gunshots sounded as though they’re coming from a mile away or instances when UNSC soldiers or Cortana were talking to you as if they’re underwater. Radio and ambient chatter also don’t show up even if you have subtitles enabled. At the very least, I didn’t encounter audio issues while mission cutscenes and cinematics were playing — which is also when subtitles appeared, albeit delayed by half a second. 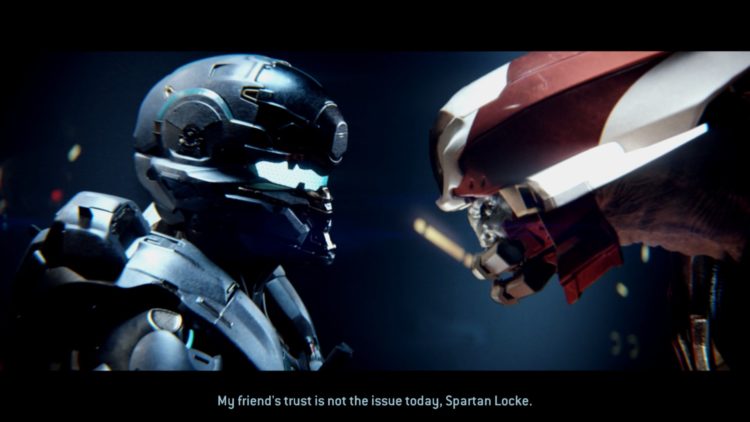 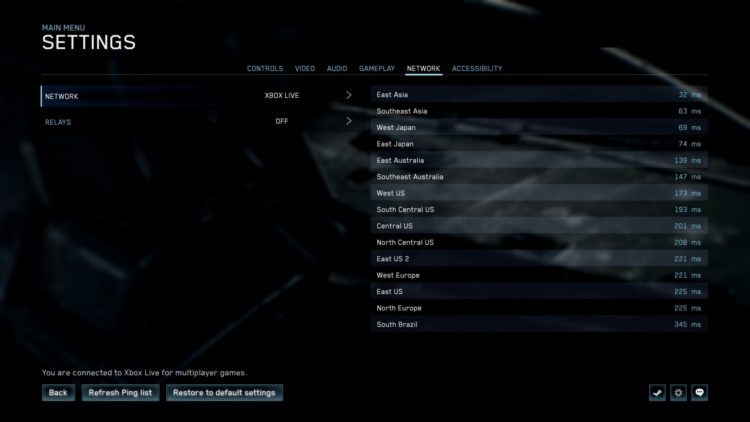 Of course, we’ll also need to discuss Halo 2: Anniversary‘s multiplayer. There are two kinds: classic and anniversary. The former has everything you remember from the original release, although, sadly, the graphics haven’t been upgraded. The latter, meanwhile, has a handful of maps that have been overhauled in time for the 2014 remaster. One example is the Shrine (anniversary) map seen below: 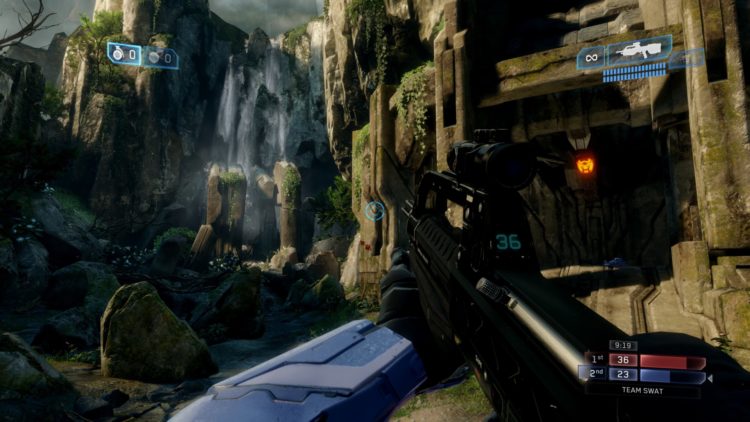 You can see an example of a classic map in the next image: 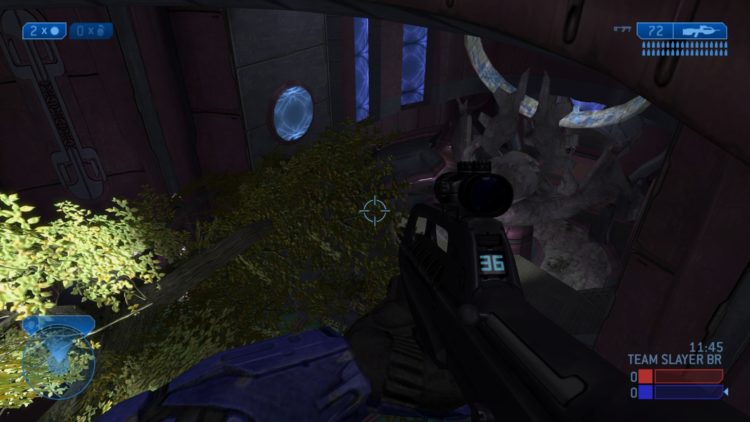 Frankly, multiplayer was hard to enjoy. Gameplay-wise, it just doesn’t hold a candle to what you’ll see from newer offerings such as Destiny 2, Apex Legends, Overwatch, or the latest Call of Duty or Battlefield. Combat was just hard to get used to, especially after you’ve seen what modern-day FPS games bring to the table.

Similarly, I’d point out that getting killed once you spawn, in most multiplayer games nowadays, is considered a major detriment and would lead to complaints. However, I can also surmise that there might be those who’d consider these instances in Halo 2: Anniversary as simply “staying true to the original to provide a fun and authentic experience.” 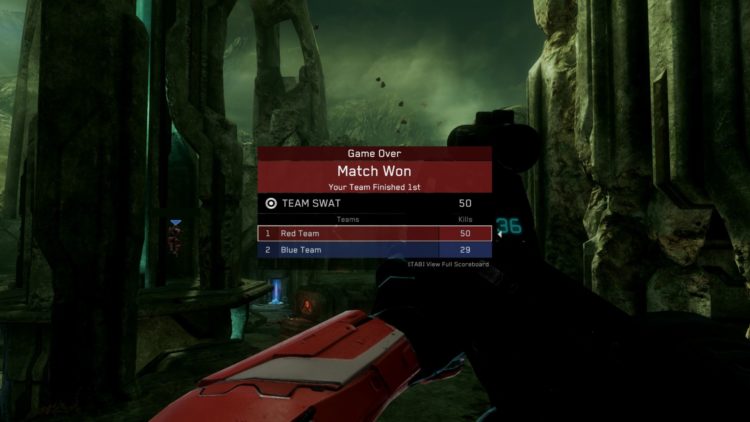 Halo 2: Anniversary – At a technical glance

As I’ve noted in a previous article, I do think that 343 Industries should’ve done more to showcase the old Halo games to a new audience. Combat absolutely feels sluggish and, even with enhanced visuals, everything still feels outdated with very few means of customizing settings to your liking. Halo 2: Anniversary just doesn’t seem like a marquee, modern-day FPS title for 2020.

Although trying to reinvent Halo 2: Anniversary into something that no longer resembles the original might seem much, the mere fact that you’re still seeing ridiculous and terrible spawns, janky targeting, delayed or non-existent hit registration, projectiles that suddenly dissipate or disappear, clunky or slow movement animations, poor utilization of cover, weird audio issues, and the like reminds me that this is a game from a bygone era.

Halo 2 was an amazing and unforgettable title back then, sure, and Halo 2: Anniversary might just wow long-time fans due to the nostalgia factor. Unfortunately, it’s also something I could barely enjoy now when there are other options for PC. 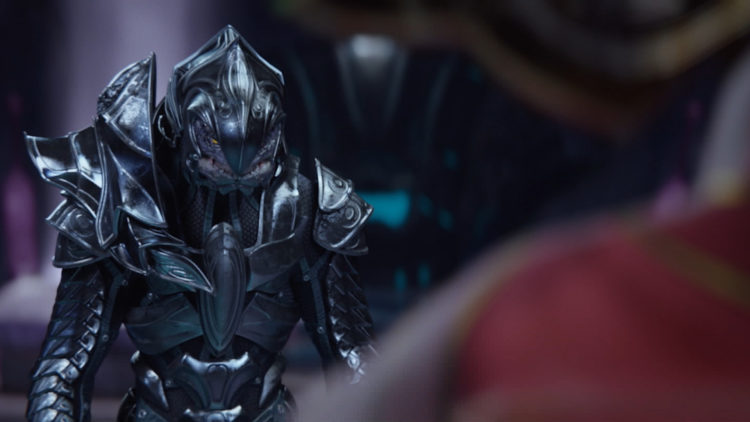 Halo 2: Anniversary is part of Halo: The Master Chief Collection. You can find it on Steam or via Microsoft’s Xbox Game Pass for PC. Oh, and if you happen to spot other issues, be sure to check out the Halo subreddit’s bug reporting megathread.