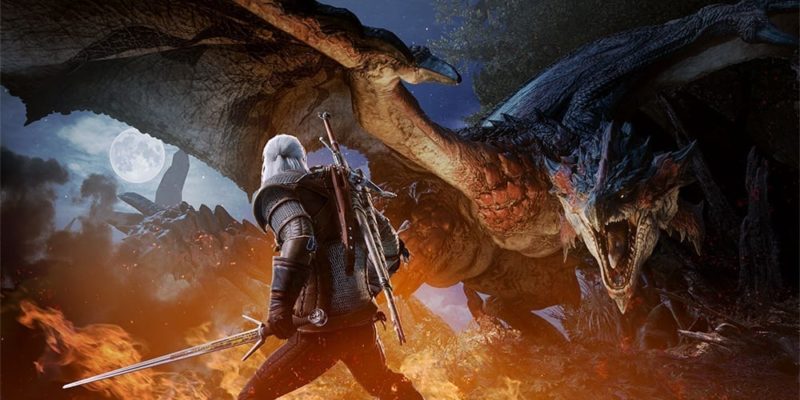 After spending some time in the Soulcalibur universe, Geralt’s next portal led to Monster Hunter. The Monster Hunter World X The Witcher event is finally here… but only for consoles. But even though this collaboration event is currently just on consoles, previous MHW DLC and events have made their way onto the PC. Given Geralt’s cross-platform appeal, it’s likely that this event will follow the same kind of delayed release schedule for PCs.

There’s no guarantee, as the PC got the Assassin’s Creed event but not the Horizon: Zero Dawn crossover. But we’re willing to bet that Capcom will want to bring an event involving The Witcher to all platforms, even if the PC version ends up coming out much later than on consoles. Therefore, we’ll treat the console content as an early look at what PC players can expect to experience down the road.

The main feature of the collaboration, other than Tempered Laviasloth, is a max rank quest where you play as Geralt of Rivia. The whole quest acts like an investigation, similar to those from the actual Witcher games, particularly Witcher 3. This shared mechanical quest is similar to the FFXIV event with the Behemoth fight, but on a whole new level.

I won’t spoil too much, but you follow red “investigation” lines, investigate some mysterious monster murders, and hunt down the perpetrator. The quests culminate in a fight with one of my favorite enemies from Witcher 3, the Leshen and/or Spriggan, which looks amazing.

By default, Geralt uses the Sword and Shield move set, complete with his silver longsword. However, instead using a shield to block, he uses the “Aard” shield spell. Basically, Capcom made the shield animations invisible and added some new effects. Even so, it looks pretty top notch.

If you grind your heart out, there’s a special item, gesture, guild card background, title, armor set, sword and shield, and Palico weapon to unlock. That’s quite a bit of stuff. Plus, you can turn your Palico into the horrifyingly impish Nekker from the Witcher games.

The Leshen is a spirit of nature who comes for those that aren’t respecting the forest around them. Out of all the monsters and enemies in the Witcher franchise, I never would’ve expected a Spriggan. I mean, it’s a humanoid monster! That in and of itself makes this fight unique. But, Capcom went a step further and let you fight it as Geralt as well, complete with his repertoire of swords and spells.

All in all, the fight with the Spriggan is a bit polarizing. It’s only available for those who completed the campaign, it’s honestly a difficult fight, and there’s no sharpening or eating. This means it can take a big chunk of time for newer players. But remember, if you’re not a fan of the SnS, go to the blacksmith and you’ll be able to switch weapons for this quest.

Overall, I’m in love with how much care they seem to be putting into this event! Now, this is only solo content at the moment, the multiplayer stuff is coming next week, along with Ciri and an “ancient” variant of the Leshen. But, even still, the amount of unique, fun stuff Capcom is trying in this collaboration makes it easily worth a look.

Why PC Players Need To Wait

When Is Geralt Going To Monster Hunt On PC?

This meant that all DLC going forward could take anywhere from half a month to a year to come to PC, depending on the circumstances. But, luckily, Capcom has kept a strict timeline. As such, astute fans can estimate when the PC version of DLC will release.

Unfortunately, it’s not an exact science. So, give it a couple of months. Capcom has been “trying” to release DLC content a bit faster on the PC schedule to catch it up with consoles, but they’re nowhere close. It took five months for the Behemoth drop to launch for PCs after releasing on consoles. So, I’d expect around the same amount of time for this collaboration event. But who knows? Maybe by the time Iceborne releases, we’ll finally get start to get parity between the platforms.

In the meantime, the console launch could be a resource for PC players. By the time it ends, players will have figured out the most efficient ways to grind and found all the secrets. So, when the time comes that PC players are finally graced with this collaboration, we’ll tear it apart.

But what do you think? Does it seem like the collab event is pretty in-depth? Are you a fan of the Witcher franchise at all? Let us know in the comments down below!