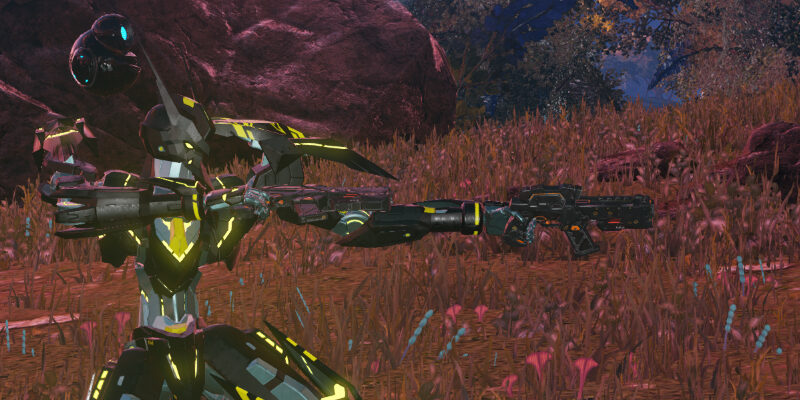 There are six classes in Phantasy Star Online 2 New Genesis, all with their own unique playstyles. Understanding how these classes interact and how to get the most of them is vital in becoming the best player possible. This guide focuses on the game’s dual-wielding gunslinger. In PSO2 New Genesis this role is filled by the Gunner class.

Machine guns are ranged weapons that are best utilized at close to medium range. They are a mobility-based weapon that deals extra damage to all enemies within ten meters. These are the weapon of choice for Gunner players in most scenarios. 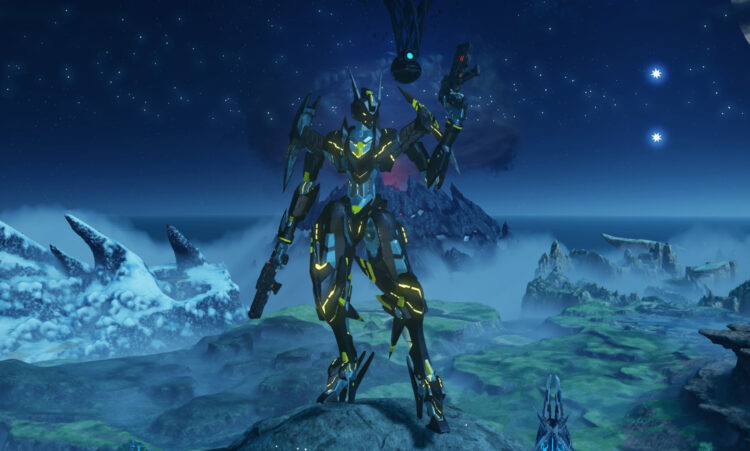 The machine gun’s weapon action is Stylish Roll. It involved rolling left or right to dodge an incoming attack. During its duration, the user is immune to all damage. This is one of if not the best dodge available in PSO2 New Genesis and it’s advised that Gunner players use it as often as possible. Furthermore, it can be improved with the Stylish Roll Arts skill to deal huge damage after successfully dodging an attack.

Although more important for the Ranger class, Gunners also get access to the rifle. However, since Blight Rounds is a Ranger class-exclusive skill, the rifle has limited uses for Gunners. It is good to clear PSE Bursts as Homing Missiles gives some of the best area of effect damage in New Genesis. Otherwise, stick with the machine guns. 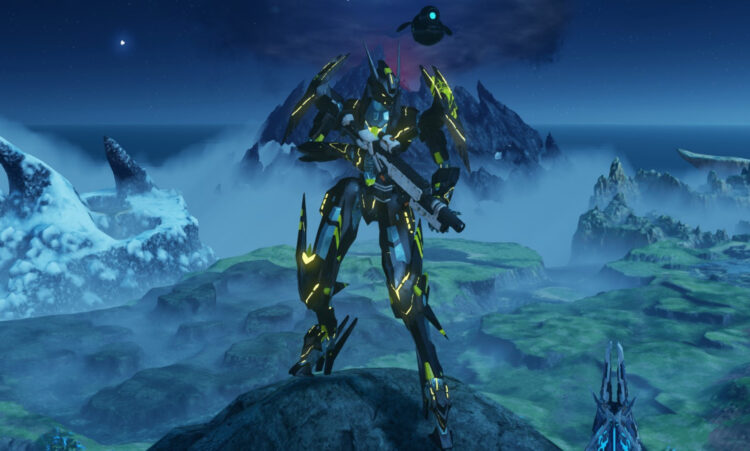 Rifle has access to the weapon action Slide Shot. When used, Slide Shot allows the user to slide out of the way of an enemy attack whilst dealing a decent chunk of damage at the same time. Although this is a good weapon action, the machine guns offer superior mobility and work better with the Gunner’s available skills.

There are enough skill points to purchase every skill available to the Gunner class. Gunners get access to the signature skill, Chain Trigger. Learning how to use Chain Trigger can be tricky but it’s very rewarding once figured out.

After using any charged Photon Art, a counter display will appear next to your character. Use non-charged attacks to charge this up to 100. Once the counter is at 100 you use another charged Photon Art to release it. From this point onward your damage will be increased for a set period of time. By purchasing Chain Boost, it’s also possible to get an attack speed boost during this phase. 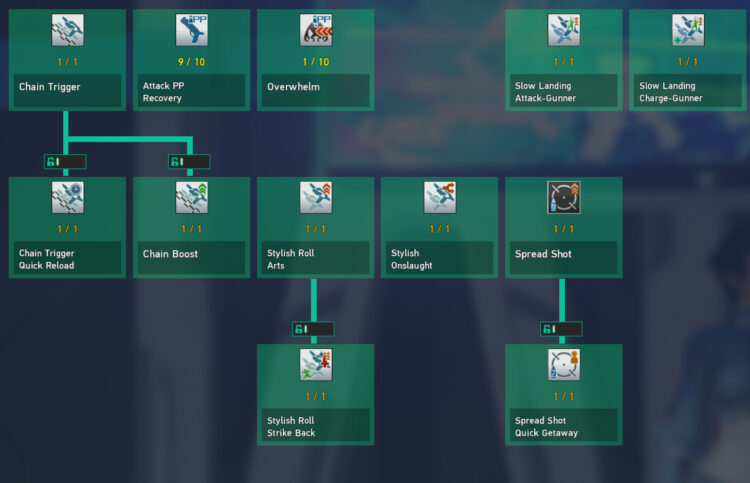 Spread Shot offers an alternative shotgun attack that can be charged up by dealing damage. It deals a lot of damage up close and should be used whenever available. Spread Shot Quick Getaway makes the user invulnerable whilst using Spread Shot and should also be purchased. Finally, both Slow Landing Attack Gunner and Slow Landing Charge Gunner should be purchased as they provide useful quality of life convenience for general movement.

Only three Photon Arts are required to play Gunner optimally. Even better, knowing when to use these Photon Arts is easy to learn making Gunner one of the most straightforward classes to play in PSO2 New Genesis.

Bullet Rave is your main damage dealing ability with machine guns. When used it unleashes a wave of bullets at your enemy. This is best used against single target enemies that are further away from you.

In contrast, Point Blank is the best damage dealing ability against single target enemies right next to you. This is particularly good in bossing scenarios where you can stand right next to the bosses’ weak point and use this over and over for huge damage.

In scenarios where multiple enemies need to be defeated, the rifle’s Homing Darts is your best option. This is one of the best area of effect Photon Arts in the game and should be taken advantage of. Players without an enhanced multi-weapon or those not willing to switch to a rifle should consider using the machine gun’s Aimless Rain to fill this role instead.

The gameplay loop of Gunner is as follows. Begin each engagement by charging up a Bullet Rave. After this continue to use either Bullet Rave or Point Blank uncharged until your Chain Trigger gauge reaches full 100. Which Photon Art to use depends on how far away you are from the enemy. Bullet Rave is best for anything beyond three meters whilst Point Blank is excellent when attacking directly next to your enemy.

Once the gauge is at 100, unleash a charged version of either Bullet Rave or Point Blank. This will trigger Chain Boost’s effect and increase your attack speed by up to 20% for 45 seconds. Whilst this boost is active, use as many attacks as possible. Once it expires, start the process over by using a charged Photon Art. 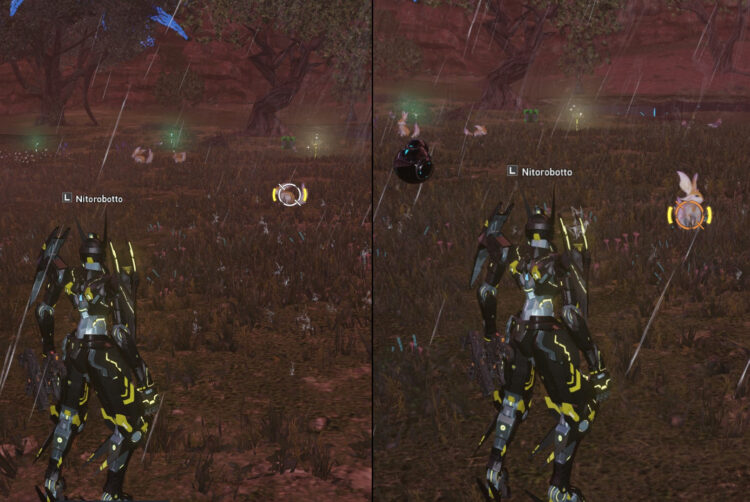 How to know if you are within your effective range. If you aren’t, the lock on reticle will appear white (left) and if you are it will change to orange (right).

Like the other ranged weapons in New Genesis, machine guns have an effective range where damage is boosted. This range is close to your target and can be figured out by watching the targeting reticle when locked on to any enemy. If in range, it will change from white to orange. PSO2 New Genesis players opting to play Gunner should make an effort to stay within this range as the increased damage stacks with the boosts provided by Chain Trigger. When working in unison these boosts can add up to produce some mouth-watering numbers.

Regarding sub-class, Gunner players should use Force, Fighter, or Hunter. Force is best for regaining PP quickly, allowing more Photon Arts to be used in quick succession. The Fighter class is an excellent choice due to the increased damage dealt to downed enemies which benefit boss fights. Meanwhile, Hunter provides extra durability which can be useful as Gunner is a close-range class making it more likely that you’ll take damage.