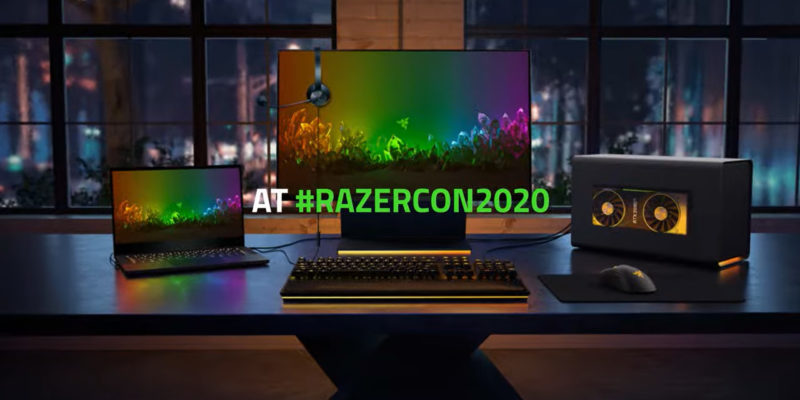 It seems like every company is doing some kind of digital event this year to make up for the circumstances. Razer is no exception. It announced RazerCon 2020 today, which will actually feature an impressive variety of programs. The event will of course serve as an opportunity to grow the brand’s identity, but there’s plenty of entertainment, too.

Everything from Razer product showcases to partner reveals will take place to get people excited about what’s next in gaming. To keep things interesting though, there will be a major raffle, a gaming PC build-off, celebrity appearances, exclusive exhibits of popular games, and even some live concerts. We’re talking EDM of course, but also metal concerts. If Razer has your attention now, be sure to mark your calendars for October 10 @12 PM ET.

There will be a pre-show at 11:30 AM, but Razer’s CEO Min-Liang Tan will officially begin the event with a keynote. The presentation will reveal the company’s latest hardware and updates. There’s sure to be some interesting stuff. The company decided to host an entire event after all. Following the keynote, the event will transition into the PCMR PC Build-off. From there, the show will progress into a number of other exhibits. Expect to see more Razer products of every variety.

The celebrity appearances we mentioned earlier are all names you should recognize if you follow major content streamers. Courage JD, Cloakzy, PaladinAmber, and Jay Robinson will all have something to say. The hosts are equally identifiable, with former Halo pro and seasoned host Bravo as one of them. There’s also Le Tigress who is big in the MOBA scene and has hosted at many other industry events such as Dreamhack. Sup3rSon1k is also on the roster, which Rocket League fans should immediately identify.

Since everyone likes free stuff, Razer is also hosting several other contests plus a raffle with a mystery $10,000 USD value grand prize. As for what the prize could be, Razer did mention it will include an RTX 3080. It surely must be an extravagant Razer PC setup. As far as winning the raffle, Razer wants you to go full hype mode for them. The more you spread the word about #RazerCon2020 via social media, the more it will increase your odds of winning the raffle. Separately, there’s also the Chroma Setup Showdown where you can flex pictures of your Razer RGB setups. The winners will get even more RGB stuff.

There will also be a number of games showing off new content along with developer commentary. HaZ Dulull will talk about Mutant Year Zero: Road to Eden and Brenda Romera will take an in-depth look at Empire of Sin. We can also look forward to the MechWarrior 5, Gears Tactics, and Torchlight 3 exclusive content premieres. Crysis Remastered will also make an appearance and show off a tech demo and new trailer. Last but not least, the developers behind Resident Evil: Village have something to show.

To close out the event, RazerCon 2020 will feature some live music entertainment. Starting at 10 PM ET, you can bounce to some EDM by NinaJirachi and Speaker Honey. From there, thing will get a little more metal. Dragonforce (and friends) will take the stage and we expect nothing short of epic shredding and impressive hair. If you want to see the folks who created Through the Fire and Flames from Guitar Hero, now’s your chance. Sabaton will close out the night with more metal. Because metal is good.

Additionally, Razer says this will be the “world’s first RGB lighting-reactive livestream,” which means Chroma devices will synchronize with the music. Now that’s an in-home concert experience.

You can find even more details about RazerCon 2020 including the full schedule on the official site.