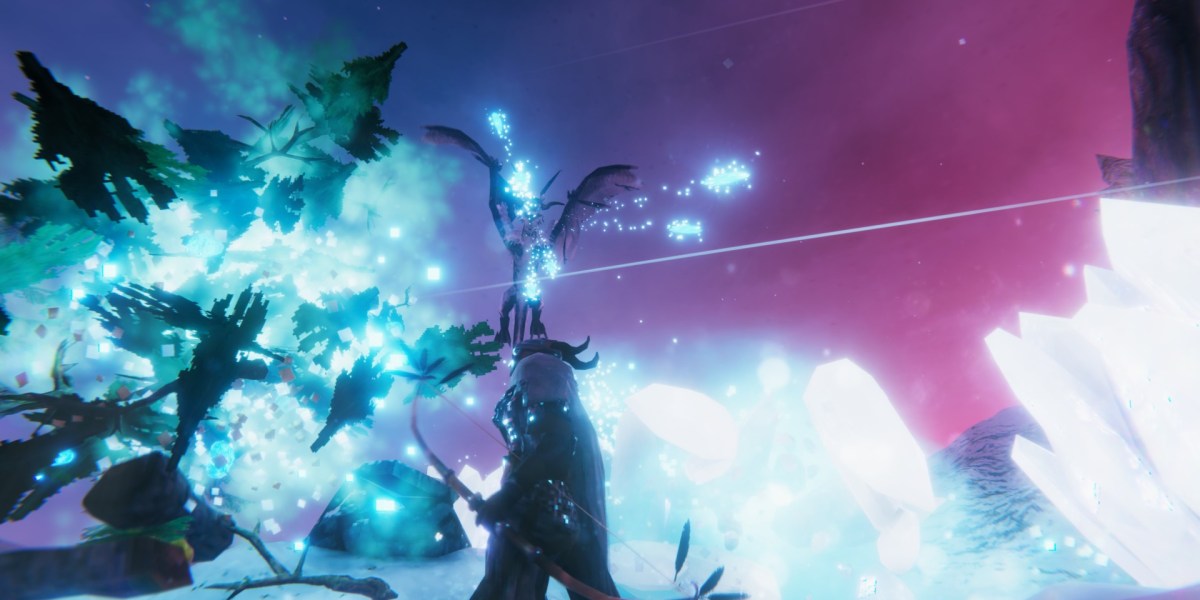 The ice dragon, Moder, is the fourth boss in Valheim, and you’ll need to find her Dragon Eggs to summon her in the game’s Mountain biome. Here’s our guide to help you out.

Valheim boss guide: Where to find Dragon Eggs and how to defeat Moder

First things first: you’re going to be in trouble in Valheim‘s Mountain biome if you don’t ferment some frost resistance mead to counter the freezing effects in the region. Once you can practically survive, you can traverse the snowy peaks in search of obsidian, silver, and Wolf Armor. In fact, I consider the Wolf Armor set pretty decent — the chest piece and cloak each provide the same frost resistance buff, so you won’t need to chug mead every 10 minutes. As for weapons, you could opt for an Iron Mace and Silver Shield, or the Draugr Fang and some obsidian arrows.

Regarding Moder’s location, it’ll always be random due to procedural generation and map seeds. More often than not, though, it’d be at the highest peak of the mountain range. Likewise, you could search stone buildings in the region to find a runestone that reveals the altar. This boss in Valheim requires 3x Dragon Eggs as a sacrifice. That’s easier said than done because each Dragon Egg has a 200-point carry weight. Even with the Megingjord equipped, you can only carry a maximum of two Dragon Eggs at any given time due to their weight. Likewise, they’re also scattered all over the Mountain biome, but you can open the world map and double-click to add a marker just so you’d remember these spots.

Unfortunately, getting around in this region can be tricky. You can’t fast travel via portals you construct in Valheim if you have a Dragon Egg in your inventory. However, you can place these on transport carts along with other materials. The downside is that the cart’s destruction (through various means) could lead to storage boxes getting crushed. This can also destroy the Dragon Egg in the process. As such, you can expect a lot of backtracking.

Alternatively, you can push onward until you find Moder’s altar, then check if any eggs are nearby. Just bring those to the altar rather than going all over the place. Like other bosses in Valheim, Moder will swipe at you if you’re too close while she’s on the ground. She also has a few unique capabilities: Anyway, what makes Moder such a hilarious boss to fight in Valheim is that the encounter’s ridiculously easy. When she’s airborne, you can safely run away from the Crystalline Shower and wait until she’s about to land. Once she’s on the ground, that’s, technically, the ideal DPS phase.

You can either get up close and personal with your melee weapons, just make sure to dodge her swipes and Freezing Breath. Alternatively, you can bring a lot of arrows to snipe her with since Moder’s movement on the ground is extremely clunky. She’ll often get stuck as though her legs turned to ice. This opens her up to getting pelted with a lot of arrows. The only challenge seems to come from random enemies that might pop up from time to time (i.e., drakes or wolves). Thankfully, unlike The Elder or Bonemass, this ice dragon doesn’t summon an entire horde.

In a short while, you’ll be able to defeat Moder without any hassles. After you’ve eliminated Moder, you’ll get the following loot: Valheim guide — How to get silver, frost resistance, and Wolf Armor