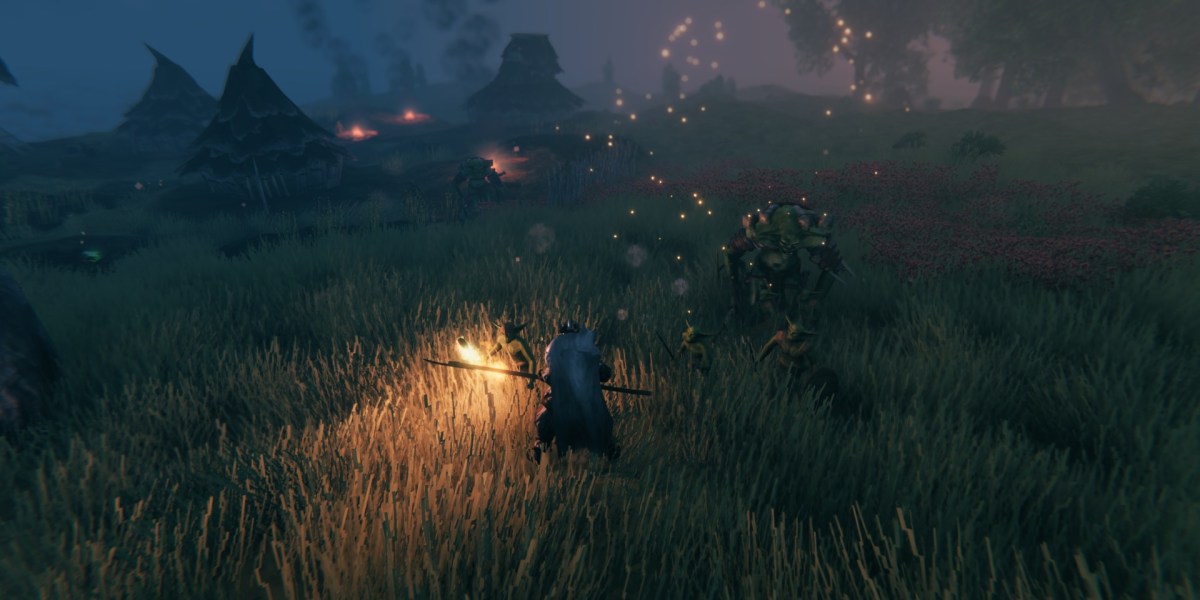 After dealing with the ice dragon Moder in Valheim‘s Mountain biome, you’ll have to make your way to the Plains region. There, you’ll be farming black metal, flax, linen, and barley from Fuling Villages. Eventually, you’ll use structures unlocked by the Artisan Table to convert them into usable materials. Here’s our guide to help you out.

Reaching the Plains biome in Valheim

Given that the Plains biome is the last type of region you’ll visit in Valheim‘s sandbox progression, it’s likely that it’s fairly distant from your initial spawn location. As such, you might want to construct a longship. Fill your inventory and the longship’s storage with lots of materials, including those used to craft portals. Oh, and don’t forget to build an extra portal in your current base. Give it a name like “BasePlains.”

Since you can’t fast travel via portals when you have heavier objects, place tons of ore in your longship’s storage as well. Lastly, select Moder’s Forsaken Power from the summoning stones. You’ll be able to have a tailwind (sail with the wind) for five minutes, allowing you to reach distant locations faster. 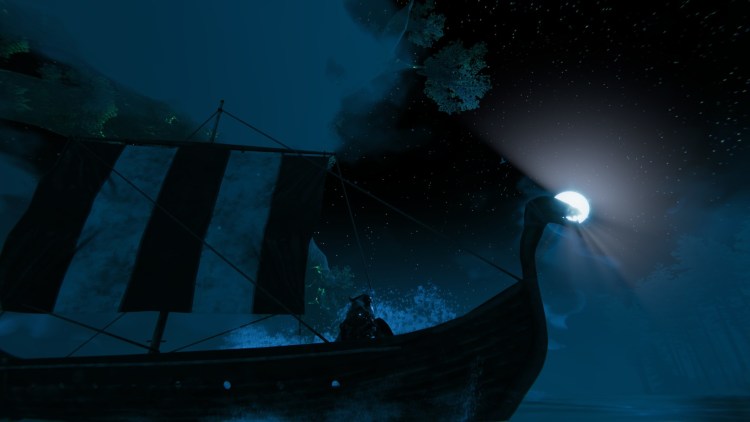 Once you’ve found a Plains biome, try to familiarize yourself with the lay of the land.  You’ll want a cozy area free of enemies since this is where you’ll construct your new base of operations.

Create several chests for ore/metal storage and plop down another portal (with the “BasePlains” name). This will let you travel back and forth your previous base in case you need to bring more materials. 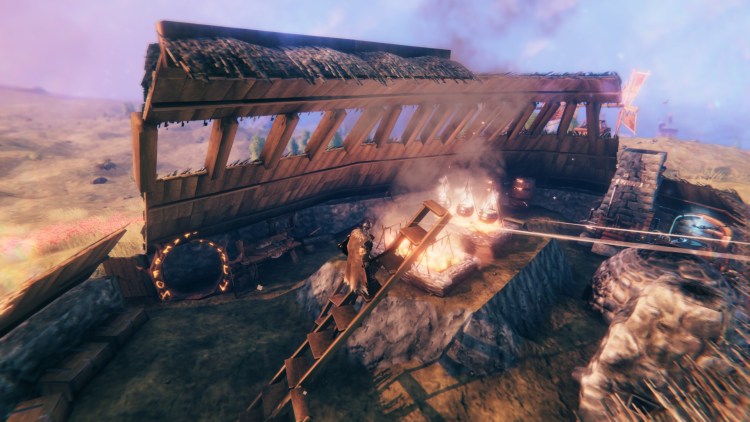 Dealing with the Fuling and other enemies

As for the challenges you’ll face, well, there are annoying deathsquitos here. Even though they’ve been nerfed, they’re still a pain to take out.

Next up are the lox, giant beasts of burden akin. They have a fairly short aggro range, but beware of their powerful stomp. If you’re up for it, you can tame them. 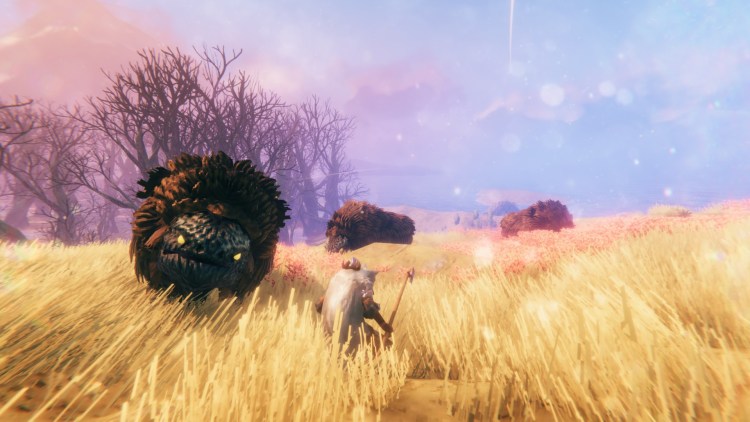 And, of course, Valheim‘s Plains region is home to the Fuling, goblin-like creatures who live in groups. These Fuling Villages have several huts, fireplaces, and tanning racks, implying that the creatures have settled here.

They won’t be too happy with your character’s presence, and you could end up fighting dozens of them:

Ideally, you should have weapons made of iron, the Draugr Fang bow, and the Wolf Armor set. Try to bring some healing mead, too, on top of the food items you have. 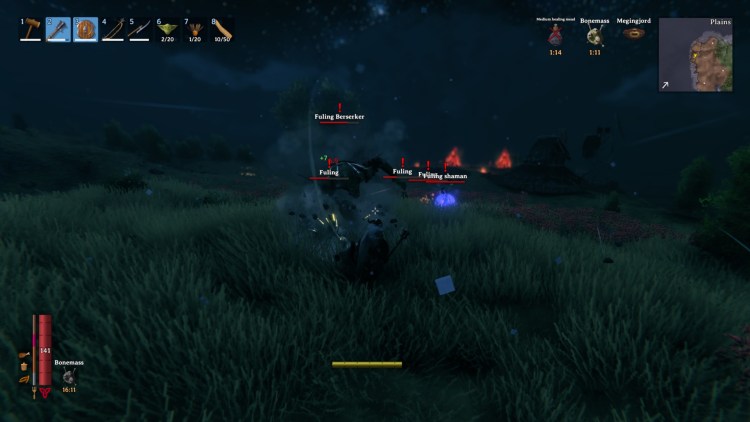 Likewise, I mentioned using Moder’s Forsaken Power for sailing. But, once you’ve reached the Plains biome in Valheim, you ought to teleport to the summoning circle to switch to Bonemass’ ability.

This buff grants you increased physical resistance which is particularly helpful due to the sheer number of goblins in each Fuling Village. 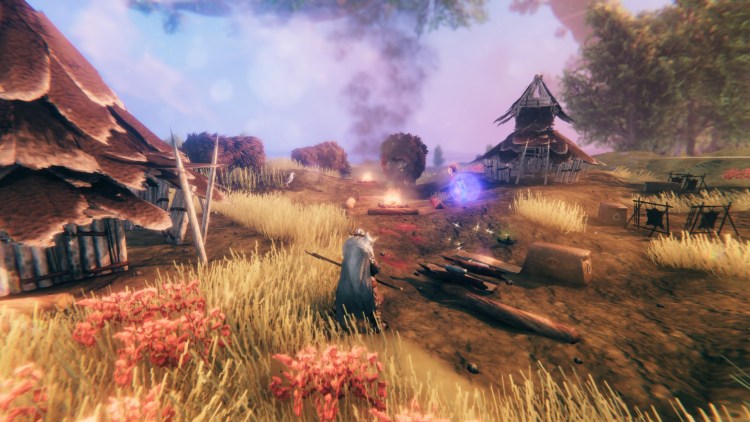 After clearing your foes, take a look around the Fuling Village. The goblins tend to drop lots of coins, just in case you need to purchase some of Haldor’s wares. They also drop black metal scraps.

The cultivated fields also have barley and flax which you can gather. Oh, and scattered all over the Plains biome are plants that grow cloudberries.

Note: Be on the lookout for Fuling Totems that are placed on poles next to bonfires. These are used as sacrifices to summon Yagluth, currently the final boss in Valheim. 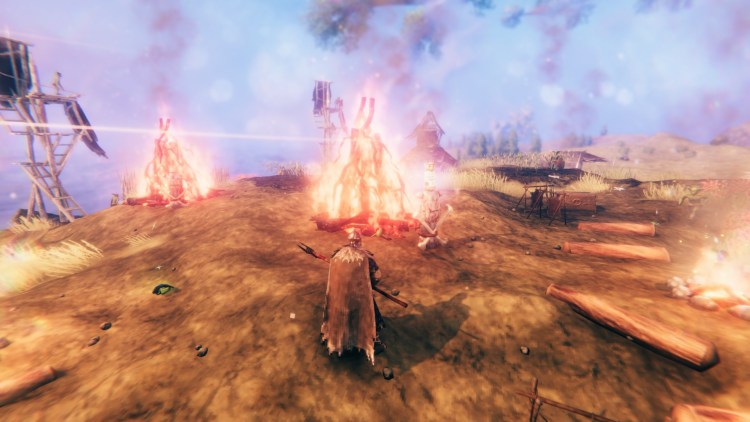 Anyway, given that you’ve defeated Moder, you’d have roughly 10x Dragon Tears with you. These let you construct the Artisan Table in your base (10x wood and 2x Dragon Tear). The Artisan Table lets you build additional structures once you have the required materials: 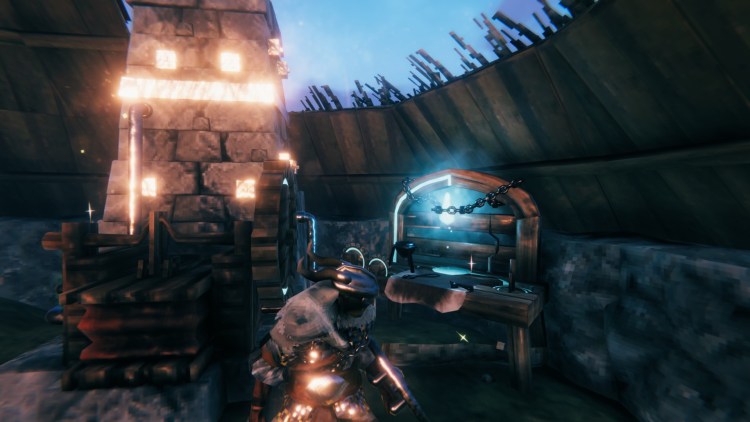 Note 1: Black metals are materials for crafting high-end weapons (i.e., Black Metal Sword and Black Metal Atgeir). Meanwhile, the Padded Armor set uses iron as a metal. If you’re lucky with your Valheim map seed, the Plains region would have a Swamp biome nearby filled with Sunken Crypts. Otherwise, it’s going to be a long trek just to bring in more iron to your new base.

Note 2: Barley and barley flour are used as ingredients for various cauldron recipes. Important ones include lox meat pie (2x cloudberries, 2x cooked lox meat, 2x barley flour) and barley wine base: fire resistance (10x barley and 10x cloudberries). The drink needs to be fermented, but you can use an exploit to skip time. 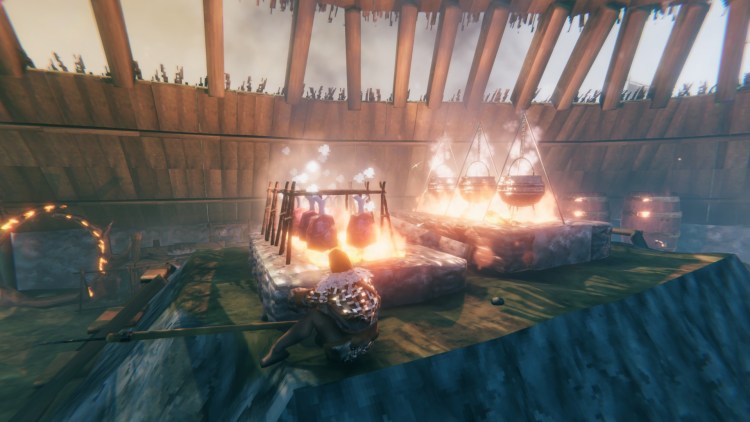 Valheim weapon guide — How to craft the Draugr Fang bow

By Matt Henzel12 hours ago
Guides