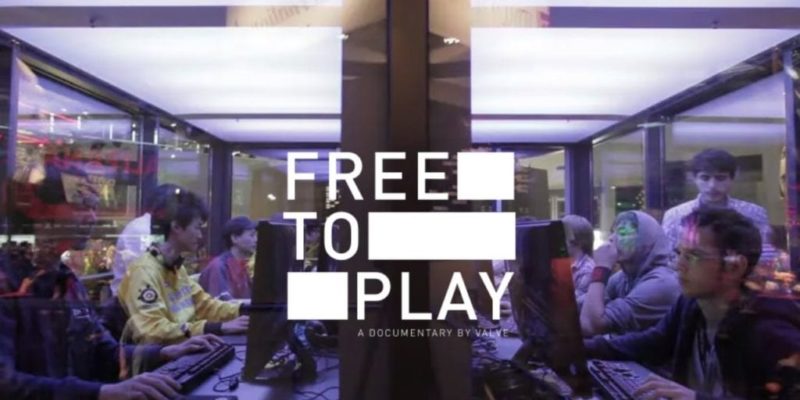 Free to Play is not a film about Dota 2, nor is it a film about the international tournament that’s confusingly named The International. It’s important to note this for all sorts of reasons, but one big one stands out: you can – and should – watch Free to Play, even if you’re not a Dota 2 player. Even if you’ve never heard of Dota 2. Even if the most recent game you’ve played is Solitaire.

Now, considering I’ve written guides for Dota 2 and run (well, “vaguely keep an eye on”) a Dota 2 guild, I didn’t really expect you to take my word for it. That’s why I also had my parents watch Free to Play.

Don’t worry, it’s not all tournaments. There are some really lovely shots like this, too.

Despite them having the misfortune of raising me, neither’s what I’d really call a gamer. My father dabbles with flight sims and the occasional racing game, and my mother plays Peggle; both are certainly aware of gaming culture and aware of the impact that games have had on my life, and both dabble in gaming, but I suspect that if you’re reading this article then you probably know more about games than they do.

They commented after the film finished that they’d never even heard of Dota 2. They also commented that they both utterly loved the film. So if you don’t believe me that this is a documentary entirely suited to non-gamers, maybe you’ll believe them.

Free to Play isn’t about Dota 2 or The International: it’s about three people involved in the Dota 2 scene, competing at The International for the $1 million USD first prize. It’s about their struggles and sacrifices, the problems and prejudices they’ve faced, and the reason why they’ve carried on through it all. To a lesser extent, it’s about the three of them as a microcosm of pro-gamers on the whole.

Although a lot of the footage shows the tournament, obviously.

The first of three is Clinton Loomis, known in Dota circles as Fear. This American – who grew up with a heavy interest in sports – was raised by a single mother and, when he started gaming seriously, was kicked out because his nocturnal patterns were causing problems for everyone else.

The second is Benedict Lim of Singapore, also known as Hyhy. His family placed a heavy emphasis on education, and took him to task when his grades started to fall as a result of his obsessively playing Dota. Not only that, but The International’s dates coincide with the final exams of his school year and the school doesn’t recognise “a big international videogame tournament” as a legitimate reason for delaying his exams, so his opting to compete most definitely comes at a heavy cost to his education. Factor in unresolved issues with an ex-girlfriend, and you’ve basically got enough that you could base an entire film around him.

The third is Ukranian Danil Ishutin, who is almost certainly better known as Dendi. Dendi drifted into gaming as a way to distract himself from the pain of his father’s death, and picked up Dota about as quickly as he picked up anything else; his segments deal a lot more in using gaming as a way of both avoiding and dealing with grief, as much as anything.

My mum says that Dendi “has a nice face.”

All three have different backgrounds, but they’ve got a few things in common. Leaving aside “drive” and “ambition”, The International is something that’ll let them prove to those around them that pro-gaming is, indeed, a viable way of living their lives. With what’s easily the biggest prize pool for a gaming tournament to date, there’s a lot on the line. Of course, all three are on different teams, so – for at least two of them – there’ll be tears by the end. And yes, parts of Free to Play get very close to being tear-jerkers.

You could try to argue that it’s a bit mawkish, but it really doesn’t come across this way in practice. While the short runtime of the film (about 70 minutes, if you ignore the credits) means that there isn’t a great deal of time devoted to any one competitor, all three come across as well-rounded human beings. You want them to succeed because you like them, and – if you’re anything like me – you probably see a bit of yourself in them.

And thankfully, Valve didn’t take the easy way out. The concerned parents aren’t demonised; if anything, their positions are entirely understandable. Hyhy’s father didn’t pay attention in school and now works a gruelling job to provide for his family, so he wants his son to avoid his mistakes and have a better life. Fear’s mother isn’t a wicked witch who kicks out a promising young star – she’s a mother who wants what’s best for her son while her career and sanity are gradually getting eroded by his erratic sleeping patterns, and she’s (understandably) panicking that he’s never going to make a living from this. Etc. There are no villains – just people with different perspectives, clashing.

While most of the footage was shot in Köln, the USA, the Ukraine, or Singapore, there are a few detours to places like China.

There’s a chronological push throughout towards the end of The International, with the film opening at Day One and climaxing with Day Five’s Grand Finals, but the film regularly cuts back and forth in time. If one day focuses a lot on Dendi and Team Na’vi, then – other than dramatically recounting the highlights of their games with the help of some nifty CGI – you can expect it to cut back to pre-International interviews with his sister or his mother, discussing what led up to this point, before hopping back to The International to get reactions from Dendi on what’s just happened.

Even when it does focus on Dota itself, it’s rarely so in-depth that a casual observer can’t follow it. There are occasional pop-ups to explain certain terms (“GG” as conceding defeat; a LAN event as being one in which everyone is in the same location) but for the most part, you only really need to understand who won, who lost, and how difficult each match was. This, it gets across with aplomb.

Hyhy’s family isn’t best pleased with his choice of career, but they certainly seem like a cheerful bunch.

While Free to Play isn’t about Dota 2 or The International itself, using them as a setting to explore the mindsets of the people in the scene and how their actions affect others, it does spend quite a lot of time discussing the rise of e-sports. There are regularly parallels to other competitive sports, with one talking head describing Dota as a combination of chess and football (that’s “soccer” to you, Americans), and regular discussion about how e-sports require as much dedication, heart, and teamwork as any other sport. There’s a lot of talk about how popular e-sports are in certain parts of the world, and how this might just be the event that gave their profile a boost in the west.

Being that The International was three years ago, I’d say they might have a point. Since then, the prize pools for tournaments like these have risen, and spectatorship is at an all time high. It might be some time before it really happens – to my mind, the problem isn’t one of awareness or financial legitimacy, but one of culture – but Free to Play presents a compelling case that professional e-sports isn’t just a passing fad.

So compelling, in fact, that my mother expressed an interest in watching The International 4. God help me if we get to the point where she’s asking for advice on her mid Pudge – I won’t know if it’s a discussion about Dota or a discussion about weight loss. If it’s the latter, things might get a bit weird when I start talking about hook positioning and being careful of rot.

Sometimes, after playing Dota, it’s best to just go and calm down outside for awhile.

So, two verdicts. For me – as someone who plays a lot of Dota and is genuinely interested and invested in this scene – it’s a fascinating internal look at what was then the biggest gaming tournament in the world, as well as an interesting examination of the people involved.

For my parents, it was a look at a world they didn’t seem to know existed. It wasn’t important to know Dota, because that simply isn’t the core of the film – it’s just a framework for looking at everything else. I imagine my parents can relate to the parental worries about having a child who does nothing but plays games, and pretty much everyone’s happy to watch likeable people with drive trying to overcome hardship.

Considering it’s free, then, I’d highly recommend you check out Free to Play for yourself (either by downloading it on Steam or wandering over to YouTube), no matter how much of a gamer you are. I loved it, and my parents loved it. If two entirely distinct sets of people with entirely distinct tastes can enjoy it, I’m pretty confident you will too.