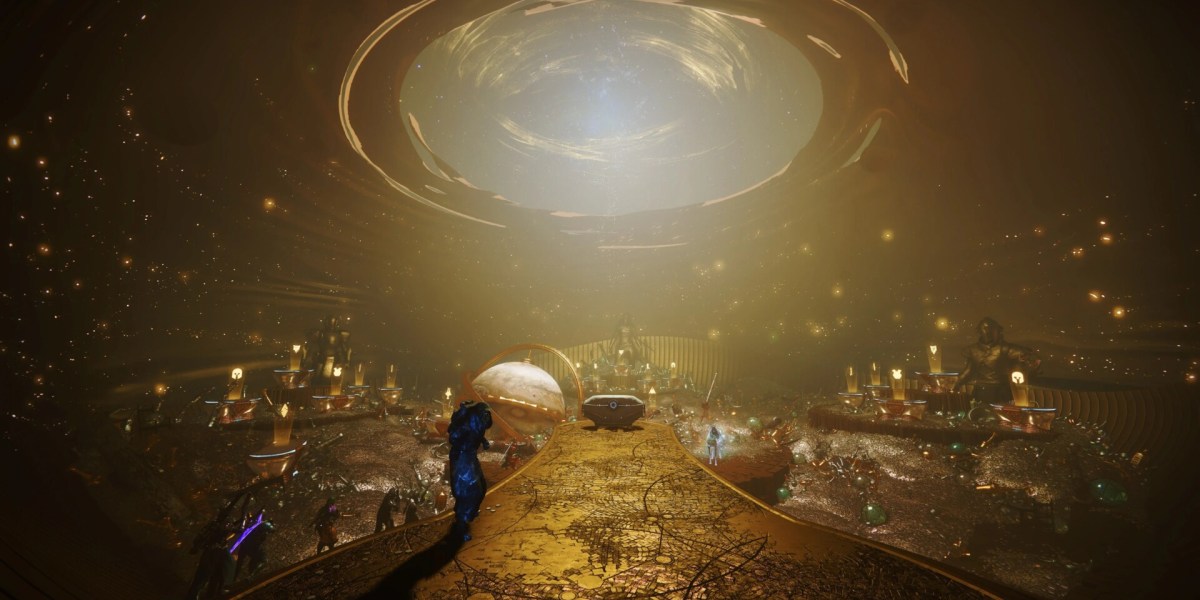 You’ll begin your first Dares of Eternity run after launching Destiny 2 (as long as you’ve updated the game). Once that’s cleared, a new location called Eternity will appear in the Director. One of the selections takes you to Xur’s Treasure Hoard. Here’s our Destiny 2 guide to help you with the Starhorse bounties, the rewards from Xur, the acquisition of Strange Coins, and the gargantuan treasure chests.

When you click on the Eternity destination on the Director, you’ll see three choices: Assuming you’ve already cleared your first Dares of Eternity activity, talk to Xur to get a quest called To the Daring Go the Spoils. The activity itself granted you a Treasure Key, and you can use that to open the large chest next to Xur. You’ll receive one of the new Bungie game-themed weapons (i.e., the BxR Battler which looks like Halo‘s Battle Rifle).

Xur will also hand you a Resplendent Reward Package which contains another one of these weapons — in my case, I ended up with another BxR. Likewise, he’ll give you an exotic quest called Magnum Opus. Completing that gives you the Forerunner, an exotic sidearm that looks like Halo‘s Magnum. Moreover, the second page of Xur’s inventory tab has another quest called And Out Fly the Wolves (if you own the 30th Anniversary Pack). This quest chain nets you the mighty Gjallarhorn. Xur’s cosmic pal, Starhorse, also serves as a vendor of sorts. The celestial creature has the same Triumph Rewards, but there’s additional stuff that you can obtain if you exchange Strange Coins.

Starhorse has some items that you can obtain: Similar to Xur, Starhorse has bounties that need to be completed during a Dares of Eternity activity. However, you can only finish the tally for that particular run. If you fail, then the progress will reset and you’ll need to try your best in another attempt. This can cause a few headaches, especially if you’re competing with other players for specific types of kills.

Note: You’re only limited to one bounty at a time regardless of that being a daily or a weekly. If you’re doing the Magnum Opus quest for the Forerunner, there’s a step that requires you to finish 3x Starhorse bounties, but tougher bounties give more progress. As such, you might want to pick the weekly to speed things up. I’ve mentioned Treasure Keys and the Strange Favor Rank a few times already. Well, these are what we need to take note of if we want to open the large treasure chests in the Eternity zone in Destiny 2. By default, only the large chest next to Xur can be opened (the one that grants the new weapons). But, several are scattered around the chamber: