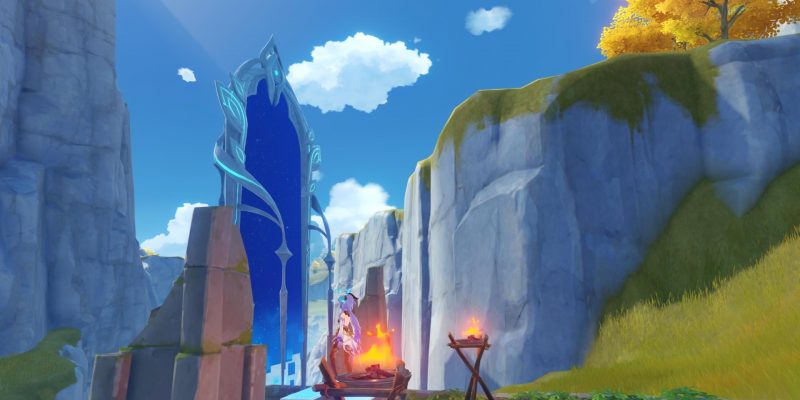 With the Energy Amplifier Initiation event that’s now available in Genshin Impact, you’ll be able to visit places of interest to collect fragments. Likewise, you could amass a particular currency to get a free Diona. To do that, you’ll need to complete battles in a new domain that will appear on your map after completing the Vishap’s Rest. Here’s our Genshin Impact guide to help you with the Twisted Realm domain’s challenges, difficulty modes, modifiers, and scoring system.

Note: For more information about the game, check out our Genshin Impact guides and features hub. You may also check our version 1.5 overview, as well as our main guide for the Energy Amplifier Initiation event. Likewise, you can take a look at a new Twisted Realm challenge in the Domain of Furious Thunder.

The first Twisted Realm challenge, the Domain of Deceit, is somewhat similar to the Vishap’s Rest domain that you just finished. Just remove the encounters in the rooms and replace that with a special fight against the main enemies: 3x Geovishap Hatchlings and 3x Geovishaps.

A key factor that you want to remember here is the Energy Amplifier. Take note of the crystals that you’ve activated as well as their effects. The ones that you obtained today all provide buffs from either Geo reactions, normal attacks/physical damage, or Cryo-based attacks. I preferred to use several crystals that provided Geo-based/shielding buffs and reactions (seen below). If you go this route, then you’ll want to have someone like Zhongli, Ningguang, or Albedo. Likewise, since I was using Ganyu, I opted for a couple of crystals that could help with Cryo damage and charged attacks.

Note 1: You can still eat food and drink potions while inside the Twisted Realm. Likewise, if you’re having trouble with the fight, you can exit the area. When you re-enter the Twisted Realm, characters will be revived and fully healed. Lastly, just wait for a few seconds and your elemental burst will be charged up.

Note 2: If you’d like a friend to help you via co-op, you’ll need to invite them to join your world first. Then, you can start the domain. Remember that only the host can configure the crystals that will be used. Modifiers: Increasing the difficulty and your score

The Twisted Realm domain in Genshin Impact is like a rehash of the Hypostatic Symphony event that we saw months ago. It has a scoring system, difficulty modes, and modifiers. The problem is that the tasks that you had to do for the Energy Amplifier Initiation event (i.e., fighting mobs just to collect Irminsul fragments) feel tacked on.

Anyway, if you make things tougher on yourself, you’ll get a higher score in the Twisted Realm. These are the ones that I’ve seen for the Domain of Deceit phase that’s available today:

Note: A special mechanic for the Twisted Realm’s Domain of Deceit is the spawning of High-Energy Crystal Cores. Whenever you defeat an opponent, these cores will drop and explode, causing massive Geo damage. There’s a good chance that these bombs will knock out your characters immediately. I’ve made no secret of my eternal disdain for Geovishaps and Geovishap Hatchlings. I think they’re the most annoying enemies in Genshin Impact.

In the Twisted Realm, you’ll fight three of each and, depending on the modifiers you’ve selected, it can be a very punishing encounter. Their spinning hits and sudden jumps will take chunks out of your party’s HP. Likewise, let’s not forget their erratic movements that seem to know when you’re about to blast them with your ult.

Still, my opinion is that you don’t actually need to get the maximum score (unless you really want the bragging rights). As such, it’s better to just stick to a difficulty that you’re comfortable with. At best, you’ll want to ensure that you can have a perma-freeze composition, or maybe bring Zhongli along for the petrify burst. The Twisted Realm’s Domain of Deceit is only the first challenge. Three more will become available in the next few days. The highest score that you get from this challenge actually carries over to all succeeding bouts.

Likewise, the maximum combined score is 20,000 and there are four domains in total. Therefore, a realistic goal for each domain is to simply choose modifiers that net you 5,000 points.

Each 1,000-point score threshold nets you Fractured Fruit Data that you can use in the event shop. Here’s the gist:

Note: Since the other challenges aren’t available yet, we’ll update this Genshin Impact Twisted Realm guide in the coming days.