If you’ve managed to maintain a steady pulse throughout this year, you’ve heard the words “Battle Royale” more times than you can count. This is all thanks to games such as Fortnite and PlayerUnknown’s Battlegrounds, which have propelled the quickly-evolving genre straight into the mainstream. With so much attention focused on these new games, it was only a matter of time until the big boys followed suit.

Enter Activision, who is looking to claim their piece of the pie with Call of Duty: Black Ops 4. This newest entry will feature an 88-player Battle Royale mode, and we finally got to give it a shot last weekend. Black Ops 4 is entering a very crowded market, and taking on Fortnite won’t be easy, so first impressions are very important. Let’s take a look together at what they’re offering.

Black Ops 4’s Blackout mode will be taking place on the largest Call of Duty map ever created. Weighing in at over 1500 Nuketowns (which is now my new favorite measure of distance), it easily dwarfs any map in the franchise’s long history. However, size isn’t everything. What good is a huge map if it’s flat and empty, void of any distinguishable landmarks? I’m happy to report this is not the case in Black Ops 4. You’ll explore various areas such as wind turbine factories, abandoned mental asylums, and a cluster of extravagant estates.

Black Ops 4 overall looks great graphically, and the map is no exception. All of the areas on the map are comprised of very different sets of textures and color palettes. This helps them all stand out against each other and prevents everything from looking too similar. Even the ecosystem of the area itself is varied, with the lush, forested hills of the North giving way to desert as you make your way to the South East. With so many varied areas it’s very easy to properly orient yourself in your surroundings, which is essential when things start going sideways. 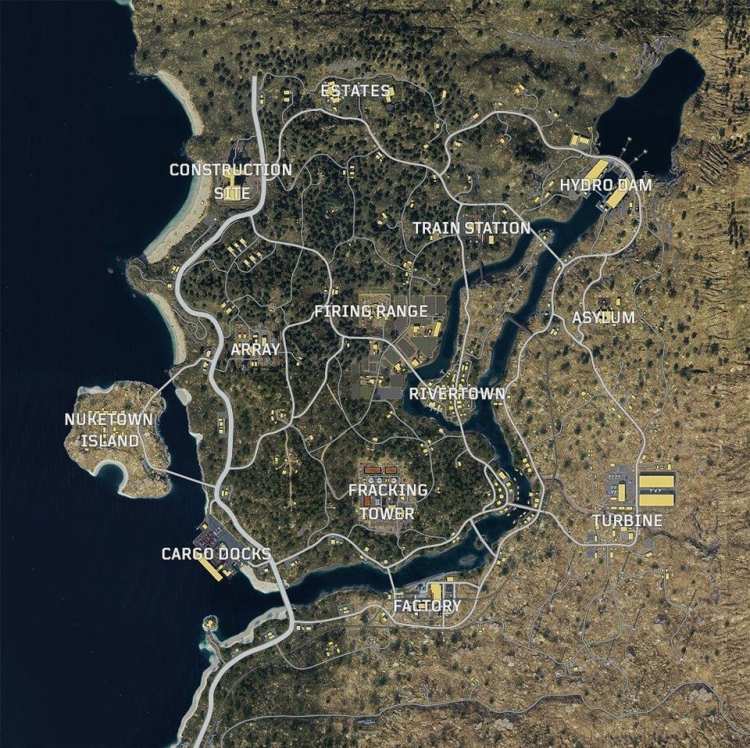 New to the Battle Royale format is the inclusion of Perks. In Blackout, perks can be looted in-game and are time-based bonuses that players can use from their inventory. Veterans of the Call of Duty franchise will recognize some of these perks, such as Dead Silence, which enables players to move silently. This creates a whole new layer of strategy for players to interact with. Not only do Perks take up an inventory spot that could otherwise be a gadget or some first aid, but they also take time to activate. This makes timing a critical part of using your Perks. Use it too early and it might expire before you can make any use of it, but attempting to pop your Perk in combat might get you killed.

Also included are tons of gadgets which open up new options in and out of combat. For example, the Grappling Hook lets you zip to anything you can hook on to. This can be used to quickly reposition or get the high ground against your enemies. Overall, Gadgets and Perks are great inclusions to Black Ops 4, and I love their implementation. Gadgets like the Grappling Hook will really set this game apart from Battlegrounds.

Black Ops 4 sports a massive arsenal of weapons and equipment for players to cause mayhem with. Included is everything you’d expect, like a near-future variant of the AK-47 and Molotov cocktails. On top of the standard kit, Treyarch has added some wackier weapons like the Hellion rocket launcher and a Ray Gun. These more powerful weapons can usually only be found as rewards from the special Zombie event areas or air-dropped supply crates, so players are incentivized to interact with these high-risk events. These special weapons should provide a good dose of weapon variety, something Battlegrounds lacks in my opinion. 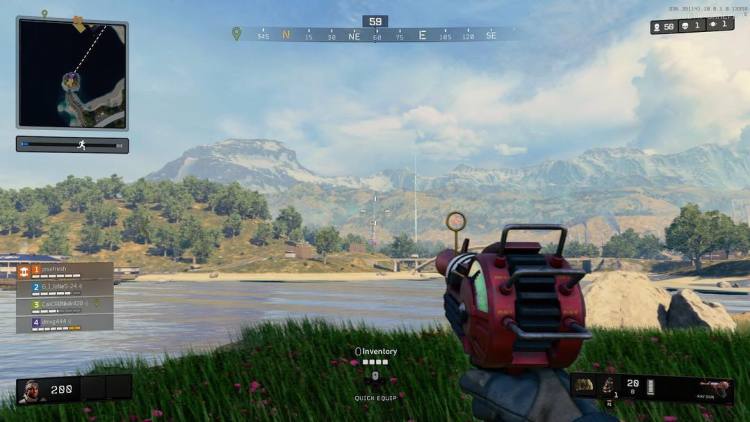 The iconic Ray Gun makes a comeback in Blackout mode.

Overall, I think most of the weapons and gunplay feel great at close and medium range. However, I had a really tough time landing shots at a long distance. My shots often felt like they would land just above or below my crosshair, even against stationary targets. I don’t want to place too much emphasis on this, since my time with the game was limited, but it’s possible this needs some adjustments.

My only other gripe with weapons is that time-to-kill seems a bit high currently, especially with armor. I don’t have hard numbers on this, but Level 3 armor feels like it doubles or triples your health. This fact trivializes long range fighting, since even more powerful weapons will require three or four shots to secure a kill. I feel that players who expose themselves to snipers should be punished, so I would like to see the armor or damage values tweaked slightly to lower time-to-kill.

I was very impressed with the performance of Black Ops 4, especially considering this is not a final build. The game looks pretty good graphically considering the size of the map. Despite this, Black Ops 4 ran just fine on my PC, which is by no means the most powerful thing out there.

The networking felt great as well. I don’t have any hard numbers on the networking stats, but I experienced little to no hitching or lag. Hit detection also seemed solid. I never felt like I was taking hits behind cover or being killed unfairly. These are both great signs considering the game is not even out yet. Other games in this genre sometimes struggle immensely with balancing good performance and high player count.

I think the good people over at Bluehole Studios have a lot of work to do after what we saw from Black Ops 4 after this weekend. Activision clearly used PlayerUnknown’s Battlegrounds as their main inspiration for Blackout mode, and I can see lots of people making the switch to Black Ops 4. Both games play pretty similarly at their core, but Black Ops 4 seems more polished even in its Beta state than Battlegrounds does nine months after leaving early-access. Black Ops 4 also has features, like the Zombie events, Perks/Gadgets, and helicopters, that Battlegrounds has no answer to currently. If Activision and Treyarch keep it up, I think they might have a real winner on their hands.

Giveaway: We’ve got 250 keys for the War Thunder Naval Beta

By Matt Henzel1 day ago
Guides