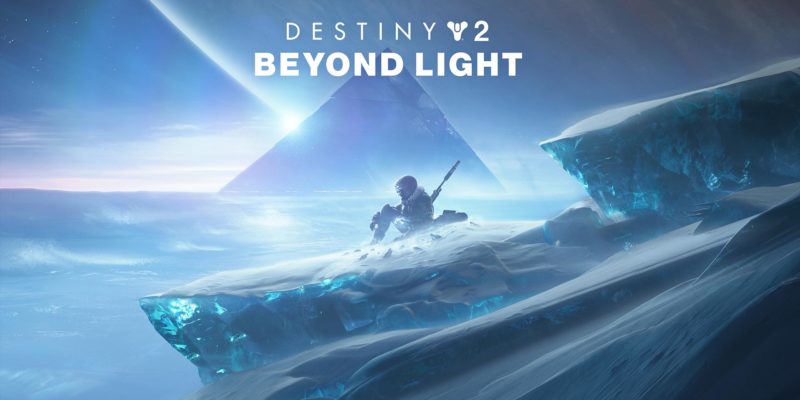 Destiny 2: Beyond Light is finally live after a short delay. The expansion and its current season, the Season of the Hunt, takes Guardians to Europa to vanquish the renegade Fallen. It’s also on this frozen moon where players will finally be able to wield a fourth element: Stasis. This condensed form of Darkness acts akin to ice, so expect to freeze and chill enemies to death.

With lots of new weapons, armors, quests, activities, and even a raid to look forward to, you’re bound to have your hands full. Let’s just hope that we’re all able to log on since there are connection issues at the moment. In any case, here’s our guides and features hub to help you out.

Official review – After leveling up all three characters, how’s the progression and grind in Destiny 2: Beyond Light? Is the expansion worth your while? Or is the gameplay loop too monotonous to bear?

What’s new in Destiny 2: Beyond Light? – There have been many changes in this new expansion, somewhat of a do-over for Destiny 2.

Fang of Xivu Arath artifact – The seasonal artifact is a tooth from the Hive god of war, a sibling of Oryx and Savathun. It’s also got several nifty mods.

Leveling guide – We’re going to have to grind to reach the new 1260 PL cap.

Variks’ Sabotage quests – Variks the Loyal is your friendly bounty NPC on Europa, and he’s got a lot of tasks for you to do.

Empire Hunts – These are missions that let you eliminate Eramis’ lieutenants. There’s also a weekly challenge that you can complete for a powerful drop.

Master Empire Hunts – Think of these as Destiny 2: Beyond Light‘s equivalent of Shadowkeep‘s Master Nightmare Hunts.

Weekly Exo Challenge – Each week, you’ll be able to do a short run in unique landscapes for a powerful or pinnacle drop.

No Time to Explain exotic pulse rifle – The Exo Stranger’s catchphrase-turned-exotic in Destiny 1 makes its return in Beyond Light.

The Lament exotic sword – Rev up your chainblade and go to town on your opponents.

Stasis grenades and the Born in Darkness quest – You don’t want to be stuck with just that ice wall, so you might as well obtain additional Stasis grenades.

The first Stasis Aspect and Entropic Shards – You can empower your Stasis abilities with a new aspect.

The second Stasis Aspect – Here’s the continuation of the Born in Darkness quest chain that lets you get your second Stasis aspect.

Note:  You can check out the content calendar for this season in the image below. Don’t forget that we’ll continue to add more guides and features as we progress further in Destiny 2: Beyond Light and the Season of the Hunt. Stay tuned and stay frosty. 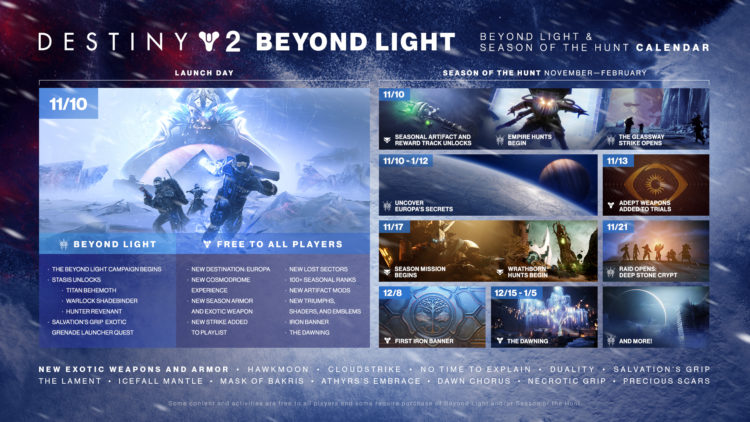 Destiny 2: Beyond Light is available via Steam.

Destiny 2: Beyond Light — The Duality exotic shotgun and the season pass